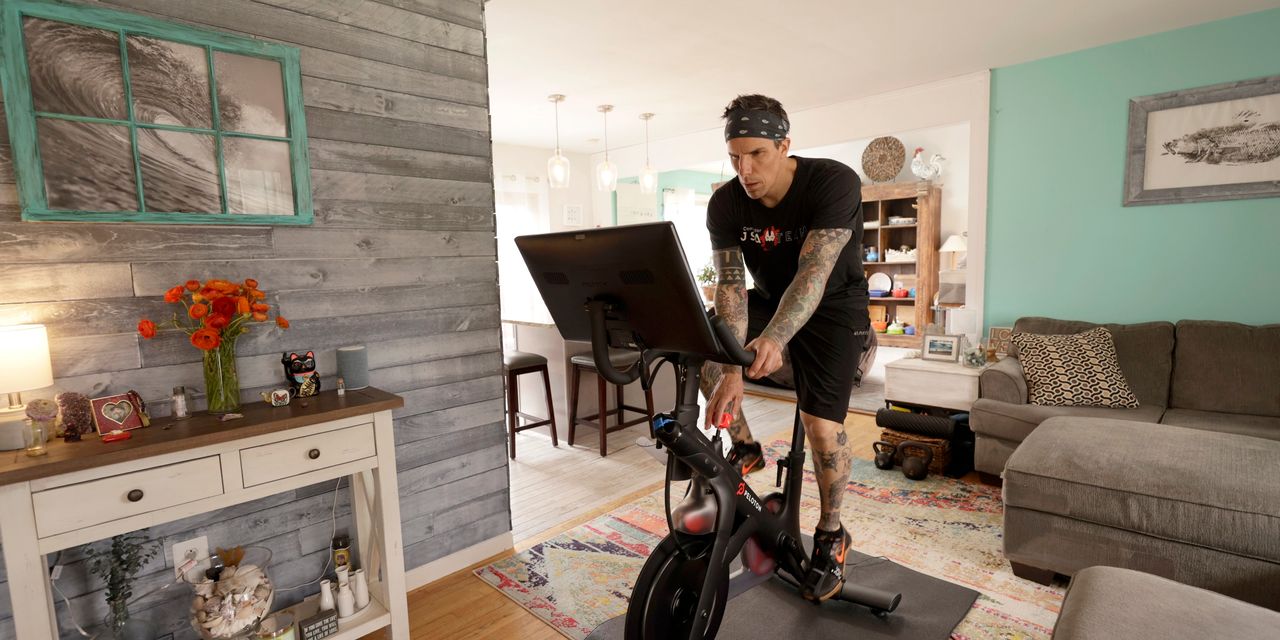 is drawing interest from potential suitors including

according to people familiar with the matter, as the stationary-bike maker’s stock slumps and an activist urges it to explore a sale.

Amazon has been speaking to advisers about a potential deal, some of the people said. There’s no guarantee the e-commerce giant will follow through with an offer or that Peloton, which is working with its own advisers, would be receptive.

Other potential suitors are circling, these people said, but no deal is imminent and there may not be one at all.

Should there be a transaction, it could be significant, given Peloton’s market value of around $8 billion—down sharply from its high around a year ago of some $50 billion.

While Peloton was once a pandemic darling as homebound customers ordered its pricey exercise equipment that pairs with virtual classes, its stock closed Friday at $24.60, below its September 2019 IPO price of $29, following a slowdown in its once-torrid growth.

Its shares jumped around 30% in after-hours trading Friday, after The Wall Street Journal reported on the interest from Amazon and others.

Despite its woes, linking up with Peloton would give Amazon or another party access to its millions of well-heeled users and their data, and a big boost in the burgeoning market for health and wellness technology. A desire for positioning in that market helped drive

There are several potential ties between Peloton and Amazon’s existing businesses, such as its fleet-and-logistics arm, which could help the bike company address supply-chain issues it and others are grappling with as a result of the pandemic. A Peloton subscription could also theoretically be bundled with Amazon Prime, which offers users waived shipping costs, a streaming service and more for a monthly or annual fee. Amazon has bundled the services of other companies it has acquired as an added incentive for shoppers to sign up for the program, for which it is charging $139 a year starting this month.

Amazon has been pushing into connected health in recent years, launching its Halo Health and Wellness tracker. Data from Peloton riders, who have the option to track their heart rate and energy consumption during a ride, could help underpin other Amazon products.

Should Amazon decide to pursue Peloton, it certainly has the wherewithal. On Thursday, the company reported more than $14 billion in quarterly profit, nearly double the year-earlier haul. Its shares rose 13.5% Friday, giving the company a market value of around $1.6 trillion.

Amazon’s approach to deal making spans its businesses, which range from e-commerce to groceries and streaming, and the cloud. Amazon’s biggest deal to date is its purchase of Whole Foods Market Inc. for $13.7 billion in 2017. Like Peloton, Whole Foods was the target of an activist shareholder who was pressuring the company to sell itself.

In May, Amazon agreed to buy movie studio MGM for around $6.5 billion. The deal is being scrutinized by antitrust regulators as Amazon and other technology giants face intensifying attention from U.S. regulators and lawmakers related in part to their past acquisitions.

and pursue a sale. Blackwells argues that the company is weaker today than before the pandemic and believes Peloton would be better off as part of a larger company. The investment firm said in a letter it made public last week that Peloton could be an attractive acquisition target for larger technology or fitness-oriented companies.

Peloton hasn’t publicly responded to Blackwells’s call for it to explore a sale.

Mr. Foley has said that Peloton is reviewing the size of its workforce and resetting production levels to improve profitability as the company adapts to more seasonal demand for its equipment.

It may be difficult to engineer any deal if Mr. Foley isn’t supportive, as he and other insiders have shares that gave them control of over 80% of Peloton’s voting power as of Sept. 30, according to a company proxy filing.

After a rapid ascent, Peloton has been grappling with slowing demand for its products. Mr. Foley has said that the company is “taking significant corrective actions to improve our profitability outlook and optimize our costs.”

Peloton recently disclosed that it would start charging customers hundreds of dollars in delivery fees and setup charges for its bikes and treadmills. In August, Peloton cut the list price of its original bike by 20%.

Peloton is set to announce results Tuesday. The company reported preliminary fiscal second-quarter revenue of $1.14 billion and said it ended the quarter with 2.77 million subscribers.

—Dana Mattioli contributed to this article.

These are the best-performing S&P 500 stocks this week. Here’s where analysts see them going