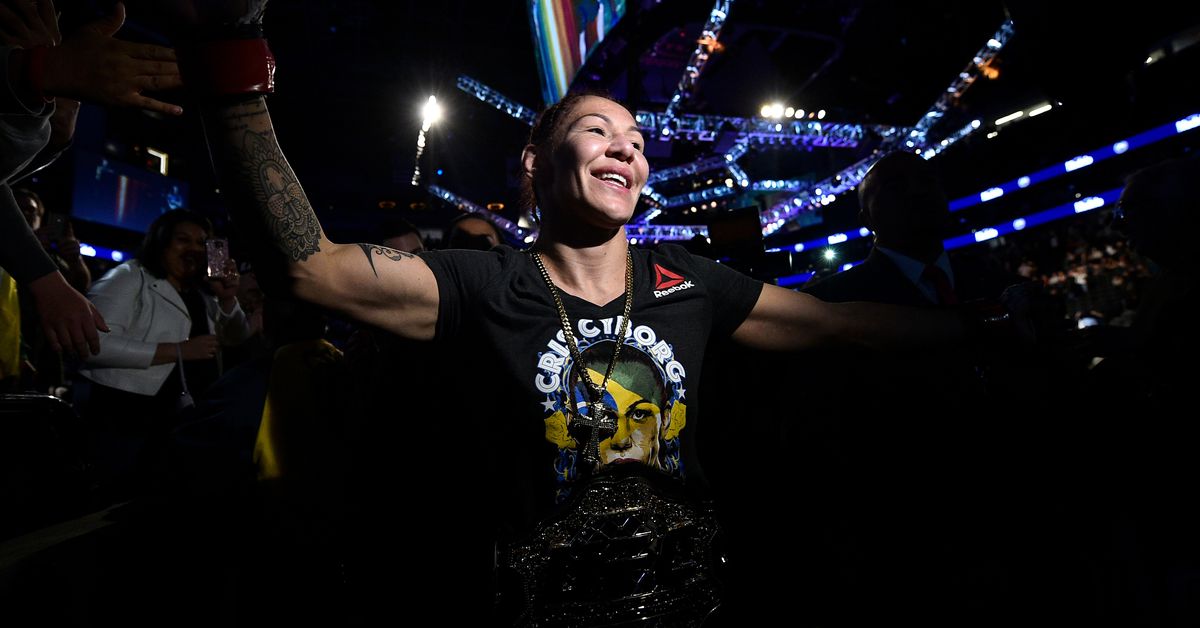 Bellator MMA will stage its second event in as many nights later TONIGHT (Sat., April 23, 2022) as Bellator 279 goes down from inside Neal S. Blaisdell Arena in Honolulu, Hawaii. Headlining the event is a women’s Featherweight title fight as Cris Cyborg defends her belt against Arlene Blencowe for the second time. Also, the Bantamweight Grand Prix kicks off with Patchy Mix taking on Kyoji Horiguchi. In the co-main event, Juan Archuleta will battle Raufeon Stots in an interim Bantamweight title fight.

Bellator 279’s main card will air on Showtime at 10:30 p.m. ET, with “Prelims” undercard action beginning at 8 p.m. ET. MMAmania.com will deliver results for the full card and comprehensive play-by-play for the televised portion of Bellator 279 below.

Many readers check in before, during and after the fights to share their thoughts on all of the action. Feel free to leave a comment (or 279) about the bouts and chat with all the other Maniacs during the show — it’s always a lot of fun!

Round 1: Cyborg lands a couple of let hands. Blencowe staying in the pocket, exchanging strikes with Cyborg. Nice kick to the body from the champion. Cyborg pushed Blencowe up against the fence. Knees to the thigh. High kicks lands for Cyborg. Left hook from Cyborg. Blencowe lands a nice right hand. Cyborg lands a huge right hand and drops Blencowe. Cyborg goes in for the kill but Blencowe survives. A pause in action as the referee says Cyborg kneed her down opponent to the head. Not sure if a point is taken away from Cyborg. Action resumes and Cyborg gets the takedown. Head kick lands for Cyborg. Blencowe survives a tough first round. 10-9 Cyborg

Round 2: Cyborg attacking the lead leg, Blencowe counters with a right hand. Cyborg coming forward. Double jab from the champion. Cyborg seems to be bleeding from her ear. Blencowe goes downstairs with an inside leg kick. Cybor with a stiff right hand, stops Blencowe’s forward momentum. Cyborg changes levels and goes in for the takedown, stuffed. Cyborg clinches and pushes Blencowe up against the cage. Cyborg still trying for the takedown but Blencowe escapes. Blencowe is now cut above her left eye. Nice right hand lands for Blencowe. Cyborg seems to have damage on her left eye. Both of these ladies are throwing bombs! Cyborg misses on the high kick but she tags Blencowe with a solid shot to close out the round. 10-9 Cyborg.

Round 3: Head kick by Cyborg, follows it up with a kick to the legs. Cyborg’s left eye seems to be swelling up. Nice leg kicks from the challenger. Cyborg returns fire with the same. Inside leg kick from Cyborg lands. Blencowe tags Cyborg with a left hook and knocks her off balance to the canvas. Cyborg smiles and gets right back up. Front kick from Cyborg. Nice right hand straight down the pipe for Blencowe. Both of these ladies are getting busted up, bloodied, bruised. Cyborg working the lead leg again. Overhand right from Cyborg. Head kick blocked by Blencowe. Inside leg kick from the champion. Outside leg kick for Cyobrg, checked by Blencowe, who rushes in with a one-two. Blencowe is putting on the pressure, Cyborg not retreating. Close round. 10-9 Blencowe

Round 4: Who had this fight going to the championship rounds? Front kick to begin for Cyborg. Blencowe throws a looping right hand. Nice right hand from Blencowe. Cyborg again working the lead leg, peppering away. Right hand lands for Cyborg. Blencowe again knocks Cyborg off balance, the fence keeps her up. Cyborg grabs a hold of Blencowe and takes her for a ride with a HUGE suplex. Brock Lesnar would be proud. Side control now for Cyborg. Cyborg working an arm, possible kimura attempt. Blencowe trying to circle away. North-South position for Cyborg, back to side control. She lets her up. Blencowe throws a wild right hand, doesn’t land. Shot to the body for Blencowe. Kick to the stomach from Cyborg, follows it up with a sharp jab that lands flush. They are trading in the center of the cage as the round comes to an end. 10-9 Cyborg

Round 1: Stots tags Archuleta right away. They come out swinging hard early. Archuleta stumbles forward. Intense pace to begin this title fight. Archuleta changes levels and lands a huge takedown on Stots. Archuleta has a tight grip on Stots, not doing much with this position. Stots firing off some pop shots, nothing major. Archuleta trying to grab the wrist. Back to the feet, Archuleta still has a hold of Stots. Archuleta trying to get another takedown, Stots showing great defense. Stots able to serrate. Archuleta comes in with a two-punch combo. Archuleta is cut above his left eye. Stots changes levels and gets the takedown. Stots takes Archuleta’s back. “The Spaniard” escapes but Stots gets his back again to close out the round. Close round. 10-9 Archuleta

Round 2: Archuleta opening up and bringing the pressure, Archuleta is swinging with bad intentions here. One-two lands for Stots. Three straight jabs from Archuleta. Nice left hand lands for Archuleta. Kick to the body from Stots. Body shots, upstairs from “The Spaniard.” Archuleta shoots in for the takedown, defended well by Stots. Action up against the fence. Archulete looking for a trip, Stots showing great takedown defense. Stots creating the separation. Archuleta rushes in, Stos changes level and scores a takedown, but Archuleta gets up quickly. Archulete pushes Stots up against the cage, has the double under hooks. Stots is defending well, Archuleta looking for a single leg. Great balance by Stots. Archuleta is relentless, but he isn’t getting the takedown this time around. 10-9 Archuleta

Round 3: Archulete with two straight hooks. Stots unleashes a huge kick out of nowhere and lays out Archuleta! He goes in for the kill and he gets it after a couple follow up shots. WOW! That one came out of nowhere. Upon further review, it was the knee the caught Archuleta. Stots is the new interim Bantamweight champion.

Round 1: Macfarlane changes levels right away and shoots for the takedown. Defended well by Kish, who now has the “Pineapple Princess” up against the fence. Kish takes her down and they are back up again. Macfarlane now separates and Kish whiffs on a huge left hand on the break. Macfarlne trying to close the distance, find her range. Double jab from the Hawaiian. Feints from Kish, but not a whole lot of action. Right hand upstairs for Macfarlane. Both ladies a bit tentative. One-two lands for Macfarlane. Kish throwing, but catching nothing but air. Nice left hook to the body from Macfarlane, follows it up with a jab. Kish tags Macfarlane with a left hook. Kish is throwing her strikes from a distance, not going to cut it. 10-9 Macfarlane

Round 2: One-two from Kish. Macffarlne lands a sneaky left hand upstairs. Macfarlane shoots for the takedown and Kish has a front choke. It looks tight but Macfarlane falls to her back, forcing Kish to let go. Kish latches it back on and is squeezing hard. Macfarlane seems to be okay here. Kish postures up, she tries to get up but Macfarlane drags her down by one of her legs. She is now looking for an ankle lock, Kish back to her feet. Leg kick by Kish. Macfarlane again goes for the takedown but Kish stuffs it. Knees to the body from Macfarlane and Kish takes her down. Kish now in Macfarlane’s guard. Two minutes remaining. Kish dropping some elbows, nothing lands cleanly. Macfarlane trying t escape, but Kish is holding on tight, dropping some strikes from the top position. Kish gets up, lets her foe up. Odd. Nice left hand lands for Kish. Macfarlane with a right uppercut, counter right from Kish. 10-9 Kish

Round 3: Should be tied at one a piece going into this final round. It’s anyone’s ballgame. Macfarlane opens up with a calf kick. Macfarlane tags Kish with an overhand right. Double jab from the Hawaiian. Kish with a wild swing, catches air again. Kish with a big smile on her face, Macfarlane circling, trying to close the distance. Nice leg kicks from Kish. Macfarlane stuns Kish with a right hand, drops her but Kish manages to somehow grab a hold of her and get the takedown. She is now in side control. Two minutes remaining in the fight. Kish landing body shots, Macfarlane needs to get up. Kish has her in the crucifix and is landing shots to the face. Half guard now for Kish. Full mount for Kish. Macfarlane gives up her back and Kish has an armbar. Omoplata attempt now for Kish. These ladies are now twisted up in an awkward position, Macfarlane scrambles and she has Kish’s back as time runs out. 10-9 Kish

To check out the latest Bellator MMA-related news and notes be sure to hit up our comprehensive news archive right here.