HomeWorldBiden news today: Harris says US ‘not into regime change’ but won’t...
World

Biden news today: Harris says US ‘not into regime change’ but won’t say whether she agrees Putin must go 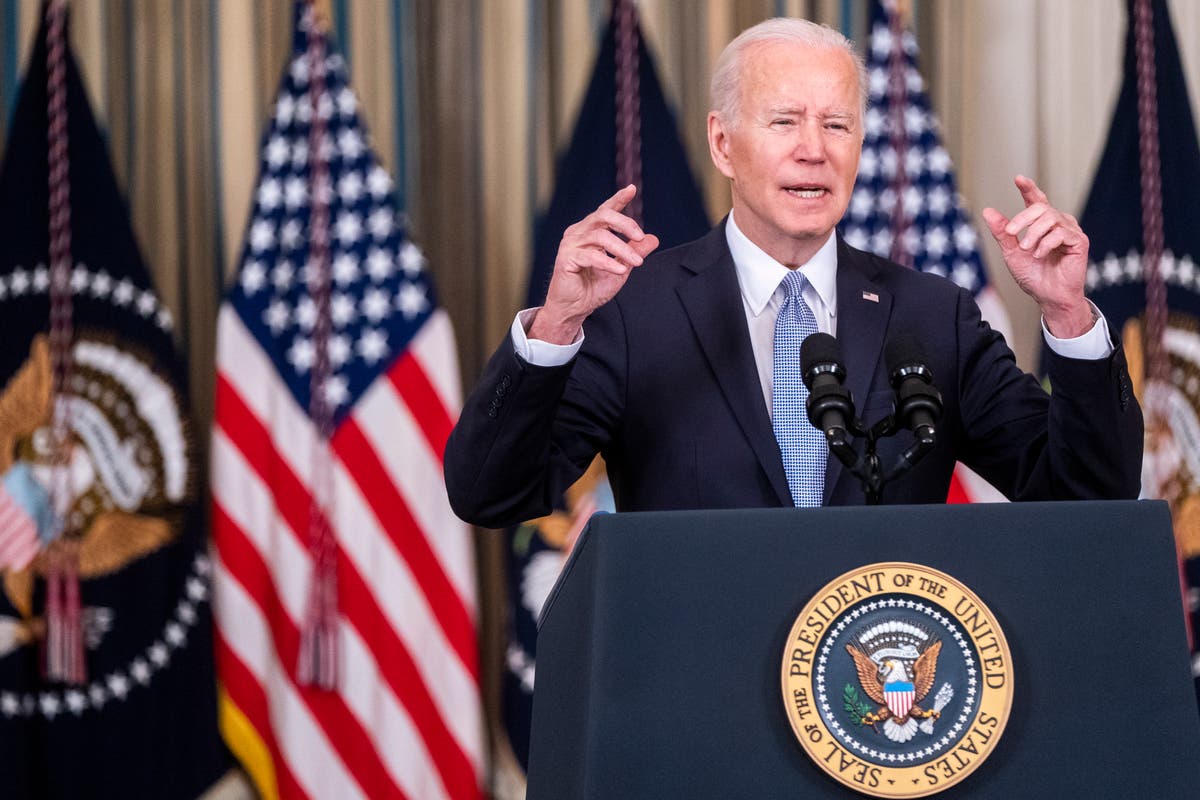 President Joe Biden delivered remarks this morning hailing another successful jobs reports that sees employment return to pre-pandemic levels and unemployment to drop to a level not seen since 1969.

While inflation remains a huge concern to Americans, Mr Biden has also ordered the release of up 1 million barrels of oil per day from the strategic petroleum reserve for the next six months in a bid to control prices that have spiked since the US and its allies imposed strict sanctions on Russia after it began its war on Ukraine.

Answering questions from reporters on Thursday, Mr Biden said Russian president Vladimir Putin “seems to be self-isolated and there’s some indication that he has fired or put under house arrest some of his advisers”.

Meanwhile, new reports say that White House Press Secretary Jen Psaki will leave her post this spring to take up a job at MSNBC. It had long been speculated that Ms Psaki would be leaving the administration soon after more than a year in the role.

At Friday’s press briefing Ms Psaki refused to comment on her plans, other than to say she that if she left she would spend time with her children and would sleep.

Pressed on if she could do be an effective briefer with plans to join a media outlet Ms Psaki said she is abiding by all ethics rules and legal requirements.

Kamala Harris says US is ‘not into regime change’

Vice President Kamala Harris has said the US is not calling for regime change in Russia, after President Biden was forced to clean up his comment that Vladimir Putin cannot remain in power.

“We are not into regime change and that is not our policy,” Ms Harris told MSNBC’s Joy Reid, but the vice president declined to weigh in definitively whether she agreed with Mr Biden’s comment that Mr Putin should be ousted.

Following reports that she is soon to depart the White House for a career in cable news, press secretary Jen Psaki faced reporters on Friday afternoon and said she had nothing to confirm about her continued public service or what plans she may have.

The Biden administration’s decision to end sweeping asylum limits at the border this May satisfied demands by prominent Democrats eagerly awaiting the end of a program created by Donald Trump in the name of public health.

But it creates thorny political challenges for border-region Democrats who face the likely prospect of an increase in migrants who have for two years been denied the chance to seek asylum in the United States.

In unusually harsh critiques of a president from their own party, some of the congressional Democrats with the toughest reelection prospects are warning that the administration is woefully unprepared to handle the situation.

Pandemic asylum limits at US-Mexico border to end in May

The Centers for Disease Control announced Friday that it is ending a policy that limited asylum at the US-Mexico border to prevent the spread of Covid-19.

The use of public health powers had been widely criticized by Democrats and immigration advocates as an excuse for the United States to shirk its obligations to provide haven to people fleeing persecution. The policy went into effect under President Donald Trump in March 2020. Since then, migrants trying to enter the U.S. have been turned away more than 1.7 million times.

The policy, known as the Title 42 authority, named for a 1944 public health law to prevent communicable disease, will end on paper April 1, but it will not take effect until May 23, to allow border officials time to prepare.

Amazon workers in New York City have declared victory following preliminary results of a union election at a Staten Island warehouse, where employees have voted to form the first union among the company’s warehouse workers in the US, a bitter defeat for one of the world’s largest companies during a historic wave of labour organising across the country.

House votes to decriminalize marijuana, but Senate unlikely to follow

Marijuana would be decriminalized at the federal level under legislation the House approved Friday as Democrats made the case for allowing states to set their own policies on pot.

The bill is unlikely to become law since it is expected to die in the Senate. That would mirror what happened when a similar House-passed measure removing marijuana from the list of federally-controlled substances went nowhere in the Senate two years ago.

Still, Friday’s vote gave lawmakers the chance to state their view on a decriminalization push that appears to have broad support with voters across the country.

Unemployment in the US is now at a low of 3.6 per cent, reaching a level it hasn’t sunk to since the start of the Covid-19 pandemic.

According to the Bureau of Labour Statistics, “total non-farm payroll” rose by 431,000 from 1 March to 31 March, with “notable” gains across “leisure and hospitality, professional and business services, retail trade, and manufacturing”.

The total number of unemployed persons in the US fell by 318,000 to a level of 6 million.

BLS said the March 2022 numbers are “little different” from those recorded in February 2020, the month before the beginning of the Covid-19 pandemic sent the US and world economies reeling.

Democratic Congressman Jamie Raskin took a potshot at his Republican colleagues on the House floor while debating legislation that would legalise marijuana at the federal level.

Joe Biden used his speech on the jobs report and his proposed budget to proclaim he is getting the deficit “under control” – this after the Trump administration’s “reckless policies and mismanagement”.