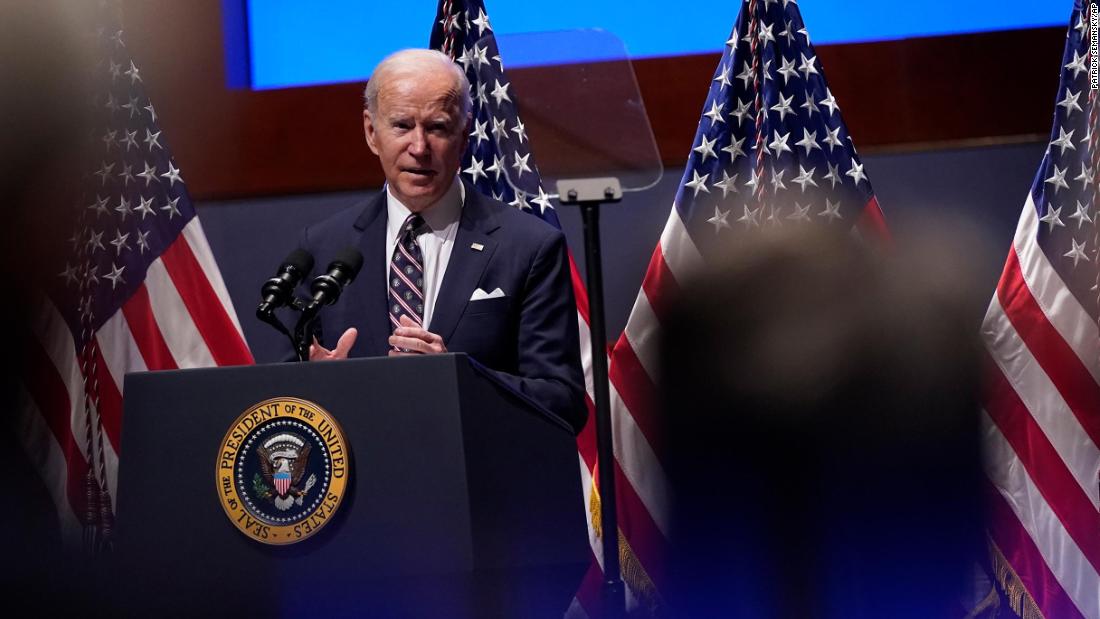 Referring to Russia, which has amassed troops on its border with Ukraine, Biden said, “It’s not like we’re dealing with a terrorist organization. We’re dealing with one of the largest armies in the world. It’s a very different situation and things could go crazy quickly.”

Biden said during his NBC interview that “there’s not” a situation that could prompt him to send US troops to rescue Americans attempting to exit Ukraine, adding, “That’s a world war when Americans and Russia start shooting at one another.”

If Russian President Vladimir Putin is “foolish enough to go in, he’s smart enough not to … do anything that would negatively impact on American citizens,” Biden added.

The White House has approved a plan for the nearly 2,000 US troops in Poland to help Americans who may try to evacuate Ukraine if Russia invades, according to two US officials familiar with the matter.

The US forces are not currently authorized to enter Ukraine itself if a war breaks out, and there are no plans for them to conduct a noncombatant evacuation operation akin to the US operation in Afghanistan last summer. Instead, the plan as it now stands is that the troops, who are from the 82nd Airborne Division, will begin setting up processing areas and temporary shelters inside Poland near Ukraine’s border where Americans fleeing the country could go for help while in transit. The facilities have not yet been stood up, one defense official said, but will start to be as more US troops arrive in Poland.

The US State Department on Thursday repeated its warning saying that Americans should not travel to Ukraine “due to the increased threats of Russian military action” and called on those in the country to depart immediately.

The advisory told American citizens in Ukraine to “be aware that the US government will not be able to evacuate US citizens in the event of Russian military action anywhere in Ukraine.”

In late January, the State Department authorized the departure of non-emergency personnel from the US Embassy in Kyiv and ordered family members to depart the country.

The US has estimated that Russia has more than 100,000 troops near the Ukraine border, with thousands added just this week, according to an administration official

Biden is expected to speak Friday with European and NATO leaders about Russia’s buildup of troops near Ukraine, according to a person familiar with the plans.

The joint call with the leaders of France, the United Kingdom, Italy, Germany and elsewhere comes as Western nations are looking for diplomatic avenues to defuse the crisis.

Biden spoke Wednesday with French President Emmanuel Macron about Macron’s diplomatic efforts in Moscow with Putin. And the top US military general, Joint Chiefs Chairman Gen. Mark Milley, has been in touch with a number of his counterparts abroad on the situation this week as well.

Milley spoke with Lt. Gen. Valery Zaluzhny, his Ukrainian counterpart, on Thursday to discuss the security environment in Europe, according to a readout of the call. It was their second conversation this week.

On Thursday, Milley also spoke with his counterpart in Belarus for the first time, in between the two calls to Ukraine.

Russia and Belarus began 10 days of joint military drills Thursday amid diplomatic efforts to defuse the crisis over fears that Russia is planning an incursion into Ukrainian territory.

Milley tried to “reduce chances of miscalculation” in his call with Belarus Maj. Gen. Viktor Gulevich, according to a readout.

Milley spoke with his British counterpart on Thursday as well.

The President said in his NBC News interview that he rejects the findings of a US Army report, which investigated the final days of the US war in Afghanistan and detailed the administration’s unpreparedness for a Taliban takeover.

The investigation’s findings were reported this week in the Washington Post after the outlet filed a Freedom of Information Act request.

The paper said the report found senior White House and State Department officials resisted efforts by the military to prepare for the withdrawal. One senior commander said the military would have been “much better prepared to conduct a more orderly” evacuation “if policymakers had paid attention to the indicators of what was happening on the ground.”

Biden said he wasn’t told about warnings the Army report says his administration ignored about evacuating the embassy in Kabul. He also said he did not accept the report’s findings and defended his decision to withdraw.

“I’m rejecting them,” he said.

“Look, there is no good time to get out, but if we had not gotten out, they acknowledged we would have had to put a hell of a lot more troops back in,” the President said.

“And there is no way we were ever going to unite Ukraine — I mean, Iraq — Afghanistan,” Biden added in an apparent mistake. “No way that was going to happen. And so this is a much wiser thing to do.”

This story has been updated with additional information.