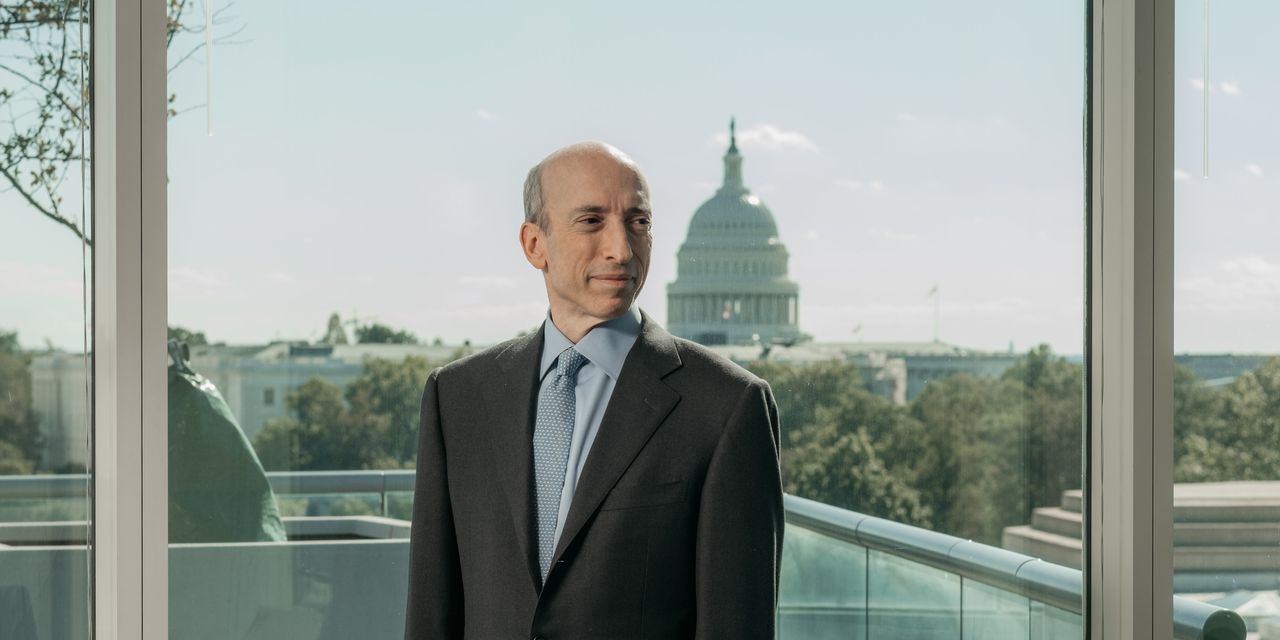 WASHINGTON—The Securities and Exchange Commission issued a raft of proposals Wednesday including measures aimed at shoring up money-market funds and curbing executives’ ability to trade their own companies’ stock.

The proposals, some of which surprised Wall Street executives with their scope, indicate that Chairman

is moving quickly to enact a policy agenda that observers have called the SEC’s most ambitious in decades. That stands in contrast to other financial regulators, for which President Biden has yet to fill key positions, and saw a nominee withdraw amid Senate skepticism during confirmation.

With a thin majority in Congress, Democrats are leaning on Mr. Gensler to advance progressive priorities such as fighting climate change and curbing the power of big business. The SEC’s authority to write rules for asset managers, publicly traded companies and the stock market provides powerful, if sometimes roundabout, tools for achieving such goals.

The proposals “will go a long way toward increasing corporate transparency and accountability,” Sen.

(D., Ohio), chairman of the Senate Banking Committee, said, praising enhanced disclosures around stock buybacks. “The first step to workers getting their fair share is learning just how much corporate executives are spending on themselves.”

supported only a plan to tighten rules on how and when corporate insiders can sell their companies’ stocks. The agency is independent of the Biden administration.

The other proposals “are a partisan overreach that will likely diminish investment opportunities, economic growth and capital formation,” Sen.

Two of the proposals put forward Wednesday seek to make the financial system more stable by reducing panicked investors’ tendency to flee money-market funds and by regulating opaque derivatives known as “swaps.” The other two rules would seek to enhance fairness and transparency in the stock market. They would introduce new restrictions on corporate executives’ trading and heighten disclosure requirements around share buybacks by publicly traded companies.

The new rules for money-market mutual funds aim to prevent episodes that occurred during the past two recessions, in 2008 and 2020, when the Federal Reserve was forced to backstop the funds after they were hit with a wave of redemption requests that caused credit markets to seize up.

Money markets are typically used by corporate treasurers, pension funds and millions of individual investors as a safe place to park cash and earn a higher return than they could obtain in a bank account. They provide companies with liquidity for short-term loans, called “commercial paper,” to cover immediate expenses like payroll.

A pre-markets primer packed with news, trends and ideas. Plus, up-to-the-minute market data.

But money-market funds aren’t regulated like banks, which must meet minimum capital requirements and offer deposit insurance. Regulators say this makes them more susceptible to runs when markets are under severe stress, creating broader risks to the financial system.

“This is about resiliency,” Mr. Gensler said in an interview, noting that Americans have roughly $5 trillion invested in money markets. “Though there have been reforms in 2010 and 2014, we found again in 2020 some instability…with the dash for cash.”

have warned could destroy a subset of the industry that holds short-term corporate debt and caters to institutional investors. The measure would require these funds to adopt policies for adjusting their share prices by a “swing factor” on days when they have net redemptions. The factor would be determined by transaction costs and the market impact of selling a slice of the fund’s portfolio.

investment chief at Dreyfus Cash Investment Strategies, which oversees $350 billion in money funds. Many didn’t expect to see the new proposed rules until next spring, he said.

The swing-pricing proposal is likely to draw universal industry opposition, said Mr. Tobin, whose business is a unit of

He said the rule would create operational challenges and could encourage institutional investors to head for the exits before a fund executes any swing-price decision.

“It’s definitely a shot across the bow,” he said. “This is a watershed moment.”

The SEC also proposed significant restrictions on arrangements, known as 10b5-1 plans, by which corporate officers and directors schedule stock trades ahead of time to avoid running afoul of insider-trading rules. Among other changes, the agency would require executives to wait 120 days before buying or selling their employer’s stock after setting up or modifying the plans.

That proposal follows academic research suggesting the arrangements are being abused as company leaders cash in at historic levels on their companies’ shares.

“The core issue is that these insiders regularly have material information that the public doesn’t have,” Mr. Gensler said in a statement. Wednesday’s proposed changes seek to ensure their stock trading is done “in a way that’s fair to the marketplace,” he added.

Repurchases support stock prices by reducing the number of shares outstanding in a company, lifting the firm’s earnings per share. Like dividends, they enable companies to return cash to investors. But critics, including many Democrats, say buybacks give executives who are partly paid in equity or options a roundabout way of boosting their own compensation, at the expense of workers’ wages or productive investments.

The SEC’s proposal would require stock-buyback disclosures to be more detailed and more frequent. Rather than disclosing monthly aggregate share repurchases once a quarter, companies would have to report buybacks on the next business day. They would also have to indicate whether any executives bought or sold shares within 10 business days of a buyback program’s announcement.

“Companies may determine to allocate capital towards share repurchases for a number of different reasons,” Democratic SEC Commissioner

said. “But one of those reasons should not be for the opportunistic, short-term benefit of executives.”

said during the meeting that the costs of complying with the increased disclosure requirements might discourage some companies from buying back stock. Ms. Peirce and Mr. Roisman issued strong dissents against the rule.

“Say ‘dividend,’ and nobody gets angry, but say ‘share buyback,’ and the rage boils over,” Ms. Peirce said. “Today’s proposal channels some of that rage against repurchases in a way that only a regulator can: through painfully granular, unnecessarily frequent disclosure obligations.”

—Justin Baer contributed to this article.

Corrections & Amplifications
The SEC proposed significant restrictions on 10b5-1 plans. An earlier version of this article incorrectly referred to them as 10b5-5 plans. (Corrected on Dec. 15.)