HomeSportsDavid Ojabo selected by Baltimore Ravens in second round of NFL draft...
Sports 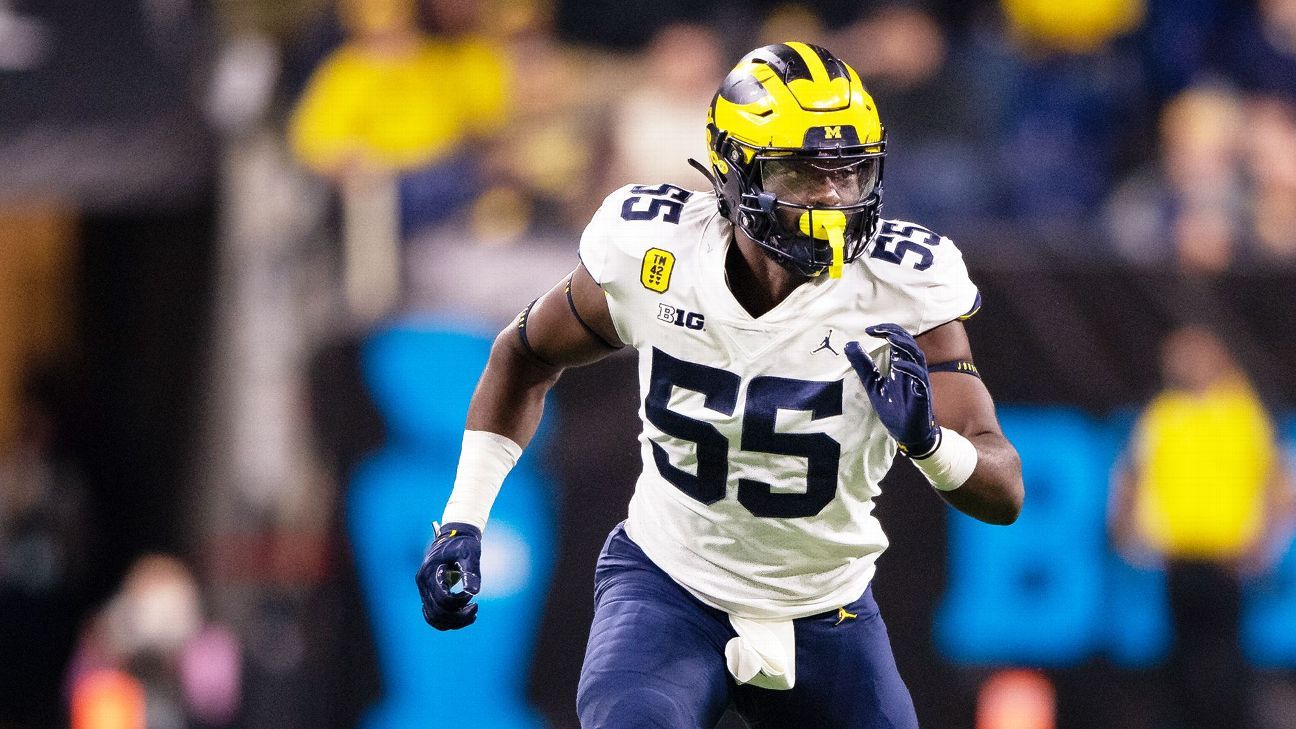 OWINGS MILLS, Md. — David Ojabo said “it means the world” to him to get drafted by the Baltimore Ravens in the second round Friday, which was exactly six weeks to the day that he suffered a devastating Achilles injury at his Michigan pro day.

Ojabo was considered a potential top-10 pick in this year’s NFL draft before he suffered the injury in a positional drill on March 18 and crashed to the ground, where he clutched his left leg in pain. At the time, he was ESPN’s Mel Kiper Jr.’s top-rated outside linebacker prospect.

When he was selected with the No. 45 overall pick, Ojabo closed his eyes, tilted his head back and let out a scream. Then, he hugged family members while tears ran down his face.

“You’ve seen it, it was raw emotion. Every second of that, I felt it,” Ojabo said. “Just being surrounded by friends and family. It’s a moment I’ll never forget.”

Pass rush is the Ravens’ biggest need, but there is a chance that Baltimore won’t see Ojabo on the field until 2023. It’s possible that Ojabo will have to sit out this season.

Ojabo, who was wearing a protective boot around his left foot and sat on a couch Friday, said he is still hopeful to play in 2022.

“I’m definitely hopeful,” he said. “But I can’t predict the future. So, I’m just day by day, do as I’m told and hope for the best.”

Ojabo said that was his first-ever injury.

“It’s a bump in the road,” he said. “Just another obstacle that I’m going to conquer.”

Ravens general manager Eric DeCosta said the team’s doctors haven’t seen Ojabo since the medical recheck but they’re “optimistic that at some point this year he’ll have a chance to play.”

DeCosta acknowledged that he thought Ojabo would be a viable first-round pick for the Ravens after watching him play in the fall.

Last season, Ojabo delivered a career-best 11 sacks and five forced fumbles (which led all Power 5 players) in his only full season of college football.

Ojabo heads to Baltimore, where he has a lot of familiarity. When healthy, he will team with former high school teammate Odafe Oweh, the Ravens’ first-round pick from a year ago, to form a promising pass-rush tandem.

On his Instagram, Odafe posted: “I’d bouta be a movie!!”

“It’s all part of the plan,” Ojabo said. “What are the odds that the person that comes in and gives me a chance to play, ultimately is the guy I’m following to the next level as well. It’s meant to be.”