HomeScienceDiscovery of what ailed Dolly the dinosaur is a first, researchers say
Science

Discovery of what ailed Dolly the dinosaur is a first, researchers say 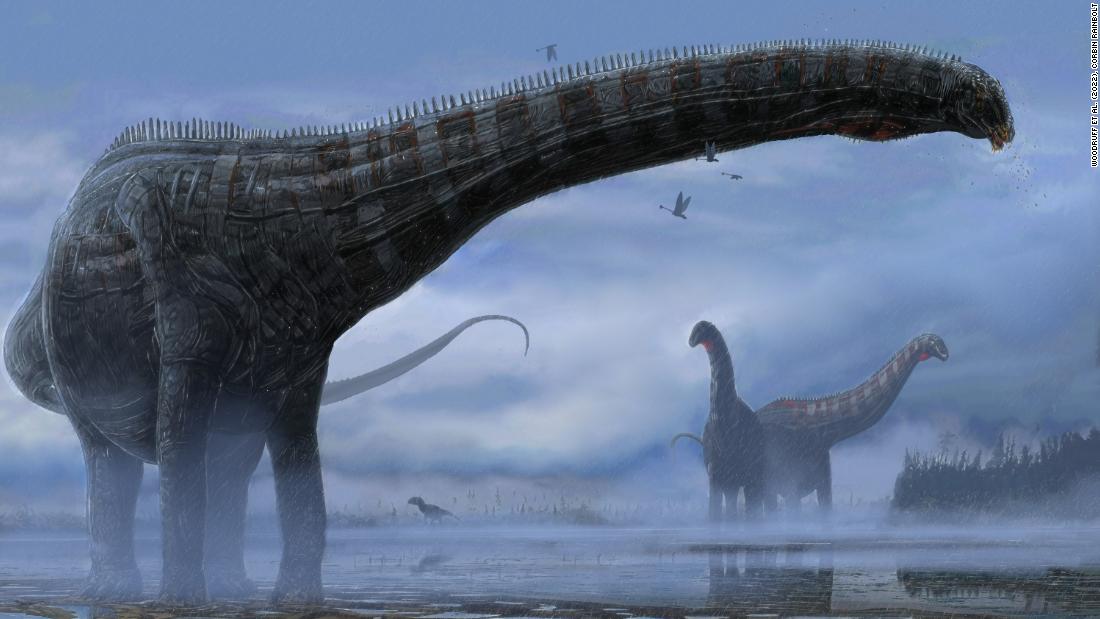 The fossil of this dinosaur, nicknamed “Dolly” for Dolly Parton, has revealed what could be the first evidence of a respiratory infection in a dinosaur, according to new research. A study detailing the findings published Thursday in the journal Scientific Reports.

The diplodocid, an herbivorous dinosaur with a long neck, reached about 60 feet (18 meters) in length and was between 15 and 20 years old when it died, according to Cary Woodruff, lead study author and director of paleontology at the Great Plains Dinosaur Museum in Malta, Montana.

Dolly’s remains, including a complete skull and neck vertebrae, were first discovered in 1990 at a site in Montana yielding other dinosaur discoveries. They aren’t able to determine Dolly’s gender based on the fossils.

Recently, Woodruff and his colleagues decided to take a closer look at three of Dolly’s neck bones and discovered abnormal bony protrusions with an irregular shape and texture.

The researchers used CT imaging to determine that the abnormal bone growth likely formed in response to an infection in Dolly’s air sacs. The dinosaur had a complex respiratory system and the air sacs connected to its lungs.

The researchers believe that the diplodocid developed a respiratory infection within its air sacs and the infection then spread to its neck bones.

“During times of trauma, bone can grow pretty fast, so I imagine all in all, we’re looking at a prolonged infection that occurred sometime during the last year of Dolly’s life,” Woodruff said in an email.

“Given the likely symptoms this animal suffered from, holding these infected bones in your hands, you can’t help but feel sorry for Dolly,” Woodruff said in a statement. “We’ve all experienced these same symptoms — coughing, trouble breathing, a fever, etc. — and here’s a 150-million-year-old dinosaur that likely felt as miserable as we all do when we’re sick.”

The bony growths were only about a centimeter in height, so it’s unlikely that they protruded or caused Dolly’s neck to swell, Woodruff said. Instead, Dolly was likely most miserable due to her flu or pneumonia-like symptoms, including weight loss and sneezing.

Dolly’s illness may have been caused by a fungal infection not unlike aspergillosis. This is a common respiratory illness in modern birds and reptiles that can lead to bone infections. When aspergillosis is left untreated, it can be fatal in birds, so it’s possible that Dolly died after falling ill, although they can’t tell when the dinosaur died after getting sick.

But how did Dolly get sick in the first place? Trying to piece together the puzzle of dinosaur disease with only bones, given that soft tissue doesn’t fossilize, can be difficult.

It’s possible that the environment in Montana 150 million years ago contributed to Dolly’s illness. At the time, there was an inland seaway slowly withdrawing northward toward Canada, Woodruff said.

“The baby Rocky Mountains were in their infancy, and the environment would have been very similar to the Gulf Coast region of the US — relatively flat, large rivers draining into the seaway, warm, humid, and well vegetated,” he said. “One possibility we proposed was that Dolly’s infection was from a fungal infection. Warm, humid climates are a perfect habitat for fungi today, and the same was true millions of years ago.”

If Dolly had an aspergillosis-like infection, the dinosaur could have caught it in a multitude of ways, like accidentally breathing in a fungal spore or catching it from another member of the herd.

In modern birds, crowded conditions can cause the spread of infection. Dinosaurs like Dolly were known to stick close together during nesting season, which could have caused infections to “spread like wildfire,” Woodruff said.

While the true cause will likely never be known, this research has provided more insight into the immune systems of dinosaurs.

“This fossil infection in Dolly not only helps us trace the evolutionary history of respiratory-related diseases back in time, but gives us a better understanding of what kinds of diseases dinosaurs were susceptible to,” Woodruff said.

Previous research has revealed that, much like humans, dinosaurs suffered from gout, cancer and infections from injuries. There is also evidence of a tuberculosis-like infection in a marine reptile that lived 245 million years ago.

But this is the first time a dinosaur fossil has revealed evidence of a respiratory infection.

Making this discovery helps researchers to better understand how dinosaurs breathed, the evolutionary relationship between birds and dinosaurs, and the pathways of infections and diseases in dinosaurs that aren’t too dissimilar from ones we experience today, Woodruff said.

Next, the researchers want to determine if any of the other dinosaur fossils found in the same location as Dolly had this infection and explore what other diseases dinosaurs may have had that can be found in modern birds.

Paleopathology, or the study of pathological conditions found in ancient human and animal remains, is growing as scientists across different disciplines work together to understand the lives of dinosaurs.

Woodruff predicts that the approach, techniques and makeup of research teams will change in the future, something that has him excited for discoveries on the horizon. Including specialists from different disciplines, such as medical experts, is allowing for new insights as researchers analyze fossils.

“Previously, we could only really speculate,” Woodruff said. “We could tell that a bone had broken and healed, but we had no idea of what caused the break. While that can certainly still be the case today, the more we approach these pathologies from a differential diagnosis perspective, and importantly, the more we work with medical professionals, the greater our identification accuracy is.”