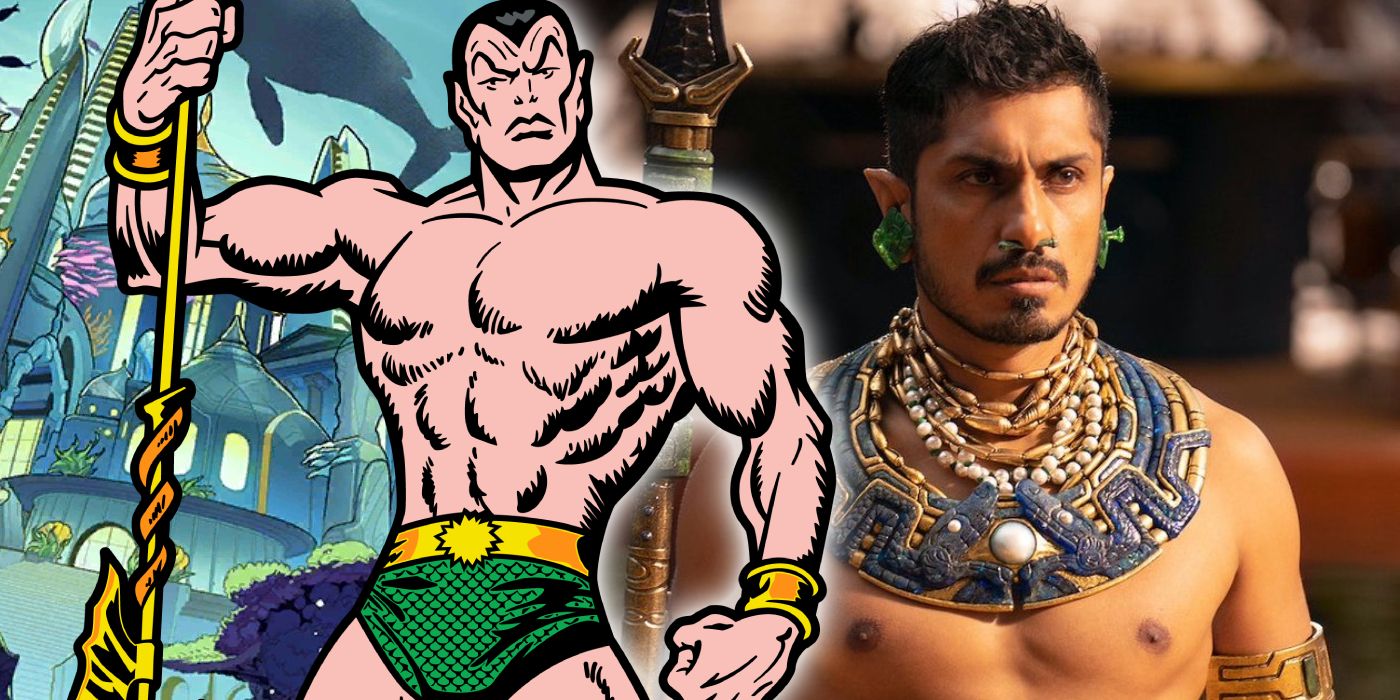 One of the most alluring aspects of Black Panther: Wakanda Forever is the introduction of Namor into the Marvel Cinematic Universe. Portrayed by Tenoch Huerta Mejía, the Sub-Mariner capitalizes on the vulnerability of the African nation in the wake of King T’Challa’s death. He’s sympathetic to their cause but blames Wakanda for his kingdom being exposed, so he wants them to ally and wage war on the surface.

Admittedly, he toes the line between villain and anti-hero, but in time, Namor does turn out to be a cold, calculating enemy. However, given his upbringing, it tracks because all he’s known is how people outside the ocean love war, bloodshed and colonization. With that in mind, let’s dissect how Namor’s origin in Wakanda Forever vastly differs from the comics.

Created in the ’30s by Bill Everett, Namor was the son of Atlantean Emperor Thakorr’s daughter, Fen and an American sea captain, Leonard McKenzie. Leonard had no clue, though, Fen was spying on humans, and after he died in a scrap with the oceanic soldiers, Fen returned home and gave birth to Namor. This hybrid child became a mutant protector, although he did have sympathy for the surface at first, partnering with Captain America and the Invaders to fight Nazis in World War II.

In time, however, Namor would become disillusioned with the surface’s penchant for pollution, conquering and destroying nature. It’s why he grew bitter and often waged war, angering The Avengers, who, as much as they wanted him to remain a member, knew he was a liability. Namor would even meet King T’Challa in his journeys and bond, but modern comics had Namor waging war on Wakanda in a power battle between regents. Ultimately, most of his rash ways came down to ego — a narcissistic edge the Fantastic Four know all too well. In addition, his love of power is also why the Phoenix ended up bonding with him, cementing he harbored not-so-altruistic ambitions at times.

RELATED: Black Panther’s Namor has a History of Aggression With Wakanda

Wakanda Forever sees Namor’s forces take Princess Shuri and Riri Williams hostage, hoping to get Shuri to understand why they need to attack the surface dwellers. And as they bond, he admits his tragic backstory began in the 16th century when conquerors brought disease with them to the Yucatán. Most of his people died, but his pregnant mother became part of a religious experiment.

A shaman found a plant powered by the mystical nature of the vibranium in their lands and seas and made a concoction, thinking this would heal and make them stronger. The human tribe transformed into blue-skinned individuals who had to flee to the depths of the ocean to breathe. In time, they moved their civilization underwater, forging the Talokan Empire. As part of the arrangement, Namor, born underwater, became king and a Chosen One. With his winged feet and acceptance of how he was a mutant, he became known by many names, especially K’uk’ulkan, or the Feathered Serpent God.

RELATED: How to Watch Black Panther 2 – and When Will the MCU Film Hit Streaming?

Namor hid his people away, but when his mom died and asked to be buried on the surface, his tribe found slavers and a brutal scene of torture. They ended up slaughtering an estate, which hardened Namor up and got him to keep his people isolated for centuries, with the likes of Attuma and Namora as his generals. Their society even used vibranium to create an artificial sun. But after Riri’s vibranium detector gets stolen and the U.S. government begins mining the ocean floor for resources, Namor decides to strike first. Thus, it’s not a world war or a thirst for power but a more confined emotional dilemma that has Namor wanting to make his preemptive strike and intimidate. Ultimately, it’s all in the interest of self-preservation, but Shuri won’t have innocent blood spilled, which leads Namor to hate Wakanda as much as he does the surface.