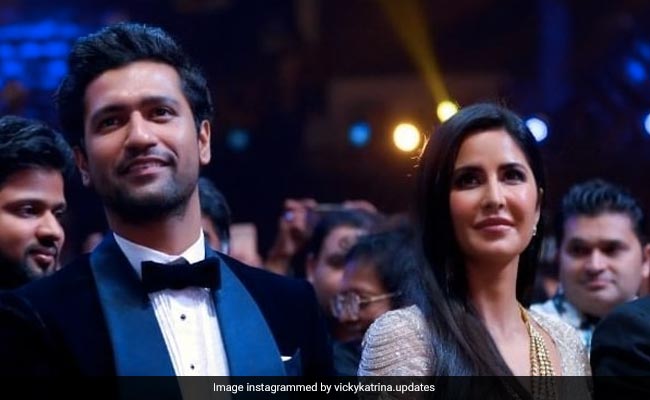 Katrina Kaif with Vicky Kaushal in a throwback. (courtesy: vickykatrina.updates)

Katrina Kaif and Vicky Kaushal’s dating life has been a hush-hush affair, much like their wedding, which will reportedly have a number of SOPs in order to keep the privacy of the couple intact. The couple will get married on December 9 at the Six Senses Resort in Sawai Madhopur, Rajasthan. However, if there is one question that is keeping fans of the actors busy, it is how did their story begin. Katrina Kaif and Vicky Kaushal have rarely been spotted together and have never addressed dating rumours. However, there is an evidence to suggest that it might have started over a coffee. Circa 2018: During an episode of Karan Johar’s talk show Koffee With Karan 6, Katrina Kaif said that she would “look good with Vicky Kaushal on screen.” A few episodes later, Vicky Kaushal appeared to faint when he was told about Katrina’s statement during the show by Karan Johar.

Fans of the actors couldn’t help but relive the moment and shared special videos. Here’s the video:

Back in 2019, Vicky Kaushal and Katrina Kaif  trended big time after they were spotted at a dinner date in Mumbai. Photos from the date went insanely viral on social media. ICYMI, this is what we are talking about:

In terms of work, Katrina Kaif will next be seen in Tiger 3 with co-star Salman Khan. She was last seen in Rohit Shetty’s cop drama Sooryavanshi, alongside Akshay Kumar. She will also star in Phone Bhoot with Siddhant Chaturvedi and Ishaan Khatter. The actress will also feature in Jee Le Zaraa with Priyanka Chopra and Alia Bhatt. The film will be directed by Farhan Akhtar and it will be written by Zoya Akhtar and Reema Kagti.

Vicky Kaushal was last seen in Sardar Udham, which opened to stellar reviews. The National Award winning actor will next be seen in Field Marshal Sam Manekshaw’s biopic. The actor has also signed another film with Uri director Aditya Dhar, in which he will also be seen playing the role of the Mahabharata character Ashwatthama. The actor has starred in hit films like Uri: The Surgical Strike, Sanju, and Lust Stories, to name a few.