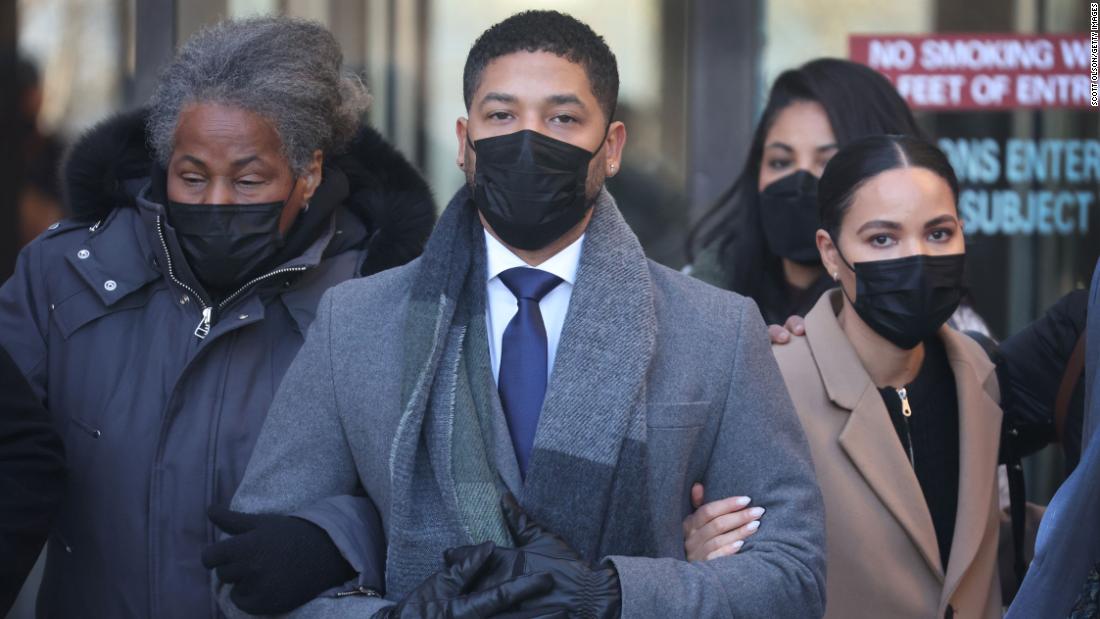 The jury of six men and six women deliberated for more than nine hours over Wednesday and Thursday.

The trial, which began last week, stems from an incident nearly three years ago when Smollett, who is Black and gay, told police two men attacked him late one night by his Chicago apartment. The mystery suspects called him anti-gay and racist slurs, put a noose around his neck, poured bleach on him and exclaimed, “This is MAGA country,” he told police.

Celebrities, politicians and others rallied to his defense, and police spent considerable resources tracking down the two suspects. But authorities soon determined that the suspects were actually two of Smollett’s acquaintances from the “Empire” set.

In court last week, those same two men — brothers Bola and Ola Osundairo — testified that Smollett directed and paid them to carry out the fake attack in an attempt to get media attention.
Smollett took the stand Monday and Tuesday and maintained his innocence in the ordeal, denying he planned the attack and insisting he was a real victim of a crime. He has pleaded not guilty to six felony counts of disorderly conduct on suspicion of making false reports to police.
Defense attorney Nenye Uche said during closing arguments Wednesday that the Osundairo brothers were lying in court about Smollett and were only interested in their own fame and attention.

Yet prosecutors say that during the investigation, it became apparent to authorities that the reported hate crime was actually a hoax. In closing arguments, special prosecutor Dan Webb accused Smollett of lying on the stand and claimed he lacked credibility throughout the case.

“You bring into the jury box your common sense and intelligence,” Webb began. “Beyond dispute, Mr. Smollett did exactly what we charged him with.”

Webb laid out in his closing statement six key pieces of evidence to demonstrate how Smollett allegedly carried out the hoax.

The first was withholding cell phone, medical, and DNA evidence from police. “Heavily redacted” cell phone records were produced for jurors, showing no phone calls to Bola Osundairo, though Webb pointed out in the four to five days prior to the alleged attack there were five phone calls, 40 text messages, and nine Instagram Direct Messages.

Second, Webb accused Smollett of misleading police on the race of the attackers, saying “he wants police to be looking for someone White.” The Osundairo brothers are Black. Smollett said during testimony that he was never sure the perpetrators were White but “assumed” and that he was “certain” he was saying pale-skinned from the beginning.

The third piece of evidence Webb pointed to was “tampering with the rope” that was seen around Smollett’s neck the early morning of the alleged attack, first on surveillance camera when the actor initially walks back into his apartment and second on body camera when police arrived.

It was initially “exactly the way Ola told you (jurors) he left it,” but then, Webb said, Smollett “monkeyed around” with the rope, to groans from the Smollett family as nearly all of them shook their heads.

Smollett had testified he took the rope and sweater off at one point, but then put it back on for police to see when they arrived.

The fourth piece Webb emphasized was the Osundairo brothers could not have attacked Smollett without advance knowledge. He also criticized Smollett’s statements that he went to a store to get food at “2 o’clock in the morning in the middle of the polar vortex in this comfortable condo.”

The final pieces of the prosecution’s argument included medical evidence of no serious injuries, a February 2019 police interview and a text to Bola Osundairo.

Webb told jurors Smollett wanted the brothers to know he was going to keep his mouth shut, in hopes they would keep their mouths shut too, and no one would find out.

“He was hoping the Osundairo brothers would not cooperate with the police,” Webb said. “He got exposed, and now we’re in a trial. That’s what happened.”

Uche, the defense attorney, told the jury multiple times not to believe most of the testimony given by either Osundairo brother, including their perceived reason for Smollett writing one of them a check for $3,500, something he called a “fundamental part of the prosecution’s case.” Prosecutors have argued throughout the trial that the check was given as payment for staging the fake attack.

Referencing testimony given by Smollett’s publicist Pamela Sharp earlier in the trial, and the $3,500 Smollett had paid her, Uche said it was normal for celebrities to pay large sums of money for services.

“So is Pam Sharp also planning a hoax with Mr. Smollett? Ridiculous!” Uche told the jury.

The attorney said detectives assigned to the case failed to perform a complete and thorough investigation, and that Smollett was telling the truth about going out to get food.

Uche described Smollett as someone who grew to appreciate the city of Chicago and not someone who would perpetrate the crime he is accused of committing.

“To go into Obama’s city to pretend there are Trump supporters running around with MAGA hats? Give me a break,” Uche said.

Saying he needed the jury to be his “Constitutional warriors,” Uche urged them not to try and serve as investigators when they deliberate but to simply ask themselves if the prosecution had met its burden of proof. He told them not to act like “Sherlock Holmes” when they reach their verdict.

Calling much of the evidence presented against Smollett during the trial “nonsense,” Uche told the jury “You cannot convict a person regardless of how you feel, especially an innocent man, without evidence.”