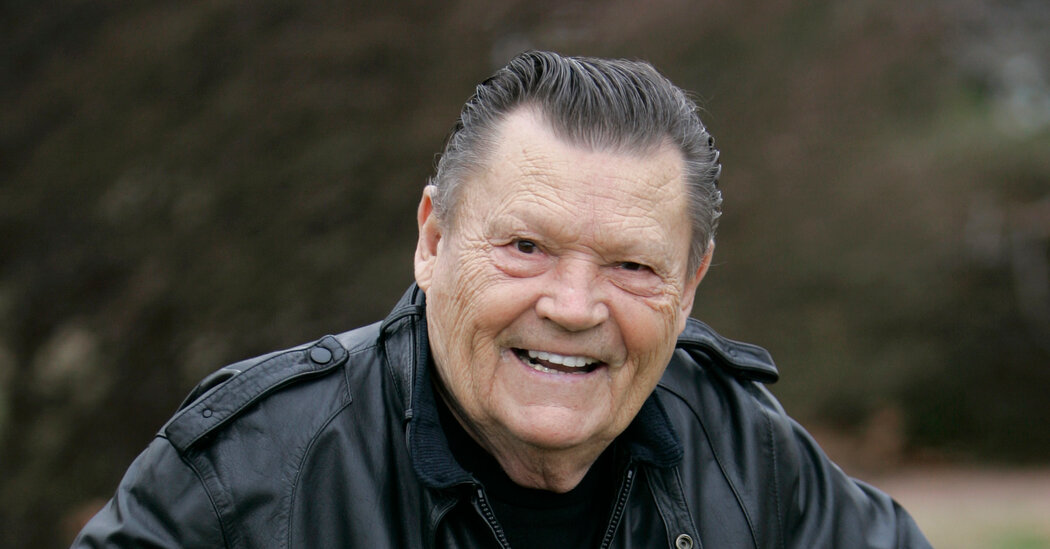 NASHVILLE — Stonewall Jackson, the honky-tonk singer who overcame an abusive, hardscrabble childhood and went on to enjoy a long, successful career in country music, including more than 60 years as a member of the cast of the Grand Ole Opry, died on Saturday. He was 89.

His death, after struggling with vascular dementia, was announced by the Opry. It did not say where he died.

In the book “From the Bottom Up: The Stonewall Jackson Story as Told in His Own Words” (1991), Mr. Jackson said his stepfather, a short-tempered sharecropper named James Leviner, had often abused him, once hoisting him high above his head and dashing him against a rock.

Another time, Mr. Jackson wrote, his stepfather beat him and left him lying senseless in a field after the boy accidentally spilled a bucket of water that he had been carrying.

“The physical scars and pain of being abused don’t last long,” Mr. Jackson said, “but the mental part of it goes on and on and on.”

“Is it power you’ve won for the things that you’ve done? What you’ve gained I guess I’ll never see,” Mr. Jackson wonders aloud, his heartache set to the record’s chugging rhythms and uncluttered production.

“Waterloo,” a catchy ditty written by John D. Loudermilk and Marijohn Wilkin, was his biggest record, occupying the top spot on the country chart for five weeks in 1959 and crossing over to the pop Top 10. “B.J. the D.J.,” his other No. 1 country single, began its run up the charts toward the end of 1963.

Most of Mr. Jackson’s recordings were made in the traditional style known as hard country: a lean, shuffling sound accented by keening fiddle and steel guitar. Eleven of his singles, including “Life to Go,” a prisoner’s lament written by George Jones, and “I Washed My Hands in Muddy Water,” a Top 20 pop hit for Johnny Rivers in 1966, reached the country Top 10.

Stonewall Jackson was born on Nov. 6, 1932, in Tabor City, N.C. His biological father, a railroad engineer named Waymond David Jackson, wanted him to be named after Thomas Jonathan “Stonewall” Jackson, the Confederate general from whom he claimed to have been descended, but he died of complications of a hernia before Stonewall, the third of his three boys, was born.

Fearing for their safety, Mr. Jackson’s mother eventually left her sons’ abusive stepfather and moved the family to Georgia, where they lived in a shack on the farm of the boys’ paternal grandmother and her husband. Stonewall was working in the fields and cutting timber there before he reached the age of 10.

Hoping to escape the drudgery of sharecropping, Mr. Jackson, who received only a limited education, lied about his age and joined the Army when he was 16. He was discharged as soon as the deception was discovered.

The next year, he enlisted in the Navy, where he served on the submarine rescue vessel Kittiwake and began honing his skills as a guitar player and songwriter. Four years later, he returned to Georgia to farm a small plot before moving to Nashville to try his luck as a songwriter.

His many hit records notwithstanding, Mr. Jackson’s biggest claim to fame was his six-decade run on the Grand Ole Opry. He remains the only singer to have been invited to join the Opry cast before releasing a record, much less having a hit.

Mr. Jackson, who lived in Brentwood, Tenn., recalled that in 1956, during his first visit to Nashville, he presented himself unannounced at the offices of Acuff-Rose Music in hopes of securing a songwriting deal. Wesley Rose, the son of Fred Rose, the Acuff-Rose executive who gave Hank Williams his start, invited Mr. Jackson to make a demo recording and was impressed with the results.

“He called WSM, the radio station that owns and operates the Grand Ole Opry, and told them about me,” Mr. Jackson was quoted as saying in the liner notes to the 1972 compilation “The World of Stonewall Jackson.” “He asked if they would set up an audition for me the next day and asked if I’d like to try out for the Opry.”

In 2007, Mr. Jackson’s relationship with the show soured when he sued Gaylord Entertainment, the Opry’s parent company, for age discrimination after his appearances on the program were curtailed to make room for younger artists. The lawsuit was settled, for an undisclosed amount, in October 2008, and Mr. Jackson resumed performing on the show.

Information about his survivors was not immediately available. His wife, Juanita Wair Jackson, died in 2019.