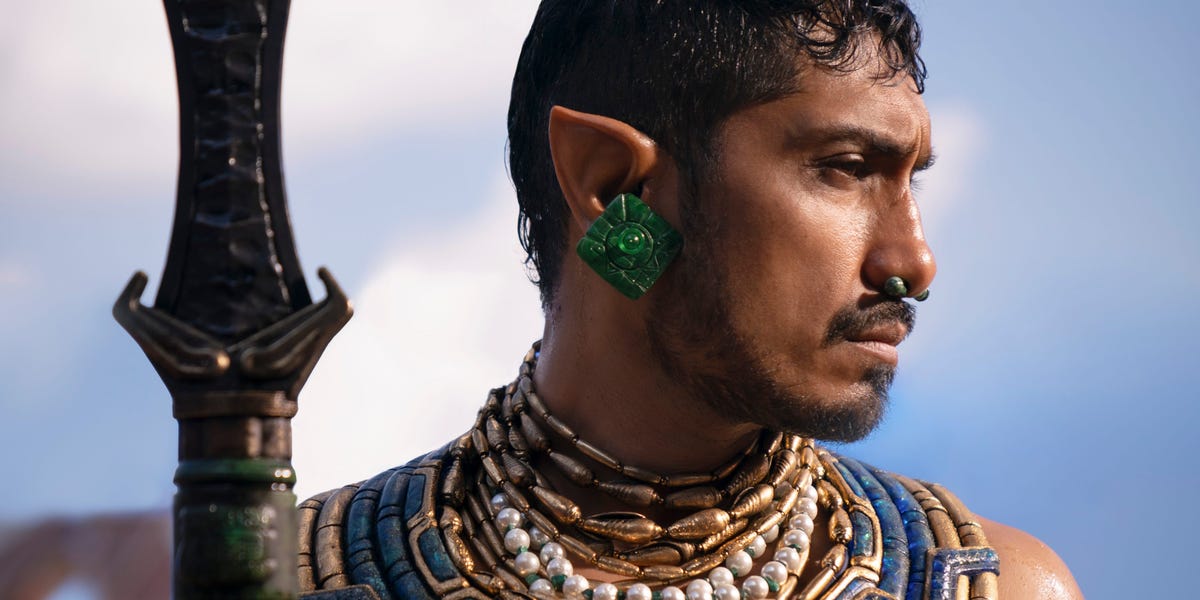 Thanks for signing up!

Access your favorite topics in a personalized feed while you’re on the go.

When Brenda Castillo sees “Black Panther: Wakanda Forever,” in theaters, she will feel a sense of pride. As an Indigenous Latina, she said Namor, an Indigenous Latino superhero in the film, is the type of representation she longed for as a child.

Namor McKenzie, an anti-hero character played by Tenoch Huerta in the upcoming Black Panther film, was created in the 1939 Marvel comics. One of Namor’s rivals is T’challa, the name of Black Panther. And while Namor is white-presenting in the original comics, Marvel chose to transform his character for the film.

“It’s my understanding that Marvel made sure that the people who were involved as advisors were Indigenous. They did their homework,” Castillo, the President of the National Hispanic Media Coalition, told Insider.

Latino professionals working in film told Insider the character of Namor, along with Warner Brothers’ Blue Beetle, set to be released in 2023, show that the large studios in Hollywood are finally listening to their community. During the release of the first Black Panther film in 2018, 65% of moviegoers were non-white, according to comscore.

Overall, Latinos purchase nearly a quarter of movie tickets nationwide but represent only 5.4% of leading roles and 5.7% of all roles on screen. Advocates hope this film will bring a level of cohesiveness to all parts of the Black and brown community and signal to major studios that their community is worth investing in.

“I don’t think the studio system and the entertainment industry and the media know the effect it causes on humanity and the world when people are not properly represented,” Maylen Calienes, Founder of the Latino Filmmakers Network, told Insider. “I have conversations every once in a while with executives, and thinking positively, I hope they open up their hearts and their minds to really consider these things, and on the Latino side of things, I really hope we unite more as a community, and we fight more as a collective.”

A pattern of cancellations

In September, Warner Brothers announced that its highly anticipated superhero movie, Batgirl, starring Afro-Latina actress Leslie Grace Martinez, was canceled. Once Discovery merged with Warner Bros earlier this year, the $90 million budgeted film, which had completed filming, was discarded as a write-off.

This upset many Latinos within the entertainment industry, Castillo and Calienes said.

“We had this opportunity that we were all rooting for, and then it got shut down. What’s happened consistently with our community is that something happens and something could be a success, but then nothing [happens] after that,” Calienes said.

Castillo and Calienes said this is not the first time a major studio has nixed a film starring a Latinx actor.

“There’s a lot of work to be done,” Calienes said.

Strengthen the bonds between the Black and brown community

After the recent Los Angeles city council scandal — where Nury Martinez, the former city council president, was caught on a recorded phone call making racist comments about Indigenous and Black communities — Castillo said she hopes this film can serve as a bridge to rebuild the relationships and trust between the Black and brown communities in Los Angeles.

The NHMC has arranged a special showing of “Black Panther: Wakanda Forever” for students at a local Indigenous school. She has faith that as an Indigenous Latina woman herself, many of the students will relate to Namor on the big screen.

Both Castillo and Calienes said as children they watched many Black sitcoms longing for their community to be showcased in the same way. Now that they are professionals within the entertainment industry they have watched the Black community come together to push for representation and simultaneously bring characters culturally from their community like Namor, to the big screen.

“Black and brown communities going hand-in-hand, pulling one up and the other pulling the other, you know. I think that’s the progress. I think it’s going to change everything,” Cruz Castillo, External Relations and Digital Media Manager at the National Hispanic Media Coalition, told Insider

They are confident with the success of “Black Panther: Wakanda Forever” at the box office, the major studios will see just how much money their community will spend to see these types of films and will want to invest in more representation of their community.

“Our community tends to go movies as families, we don’t go as singles or two people. We go in droves. And I think families will go together,” Brenda Castillo said. “So the impact that will have on children, you know once they get into a character, they want that character’s bedspread, lunch box, costume for halloween, so I think this will be explosive, and big profits will be made.”