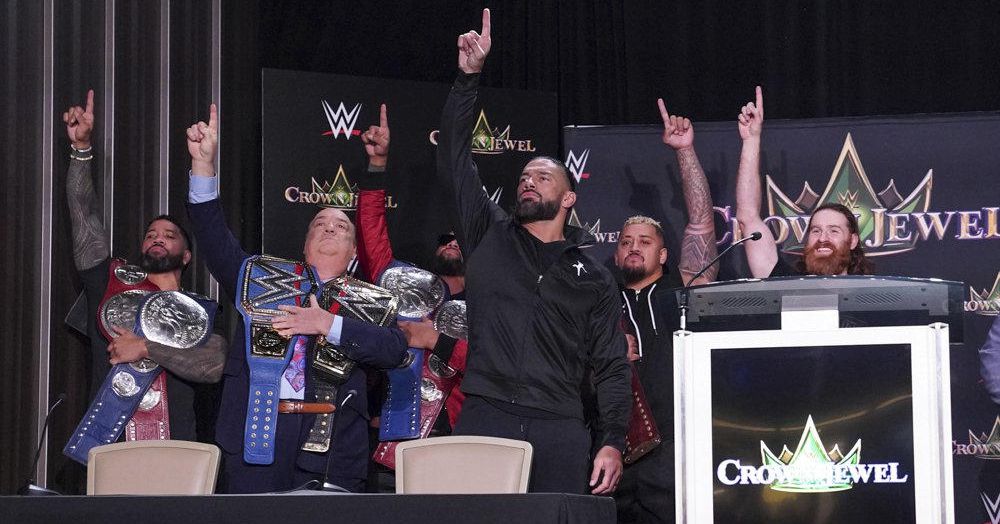 Luckily for you Cagesiders, our staff of learned wrestling blowhards is here to help figure out just how the event is going to play out with predictions for each match on the card.

Let’s get right to it.

Geno Mrosko: There is a negative percent chance that Logan Paul wins this match. There’s just no world that exists where he can win here. Pick: Roman Reigns

Sean Rueter: Watching the world burn doesn’t sound that much worse than what we’re currently watching it do, but I still don’t think WWE will go the shock route here. Pick: Roman Reigns

Claire Elizabeth: Credit where credit’s due, Logan has shown real aptitude, and WWE loves chasing an outside star, but there’s no way in Satan’s hell he should win this. I’d rather have David Arquette, frankly. Pick: Roman Reigns

Cain A. Knight: Logan Paul will land that one lucky shot, but it still won’t be good enough to prevent Roman from smashing him. Pick: Roman Reigns

Marcus Benjamin: Why does WWE make us even do things like this? Cain is more than likely correct: Logan lands a lucky punch but it’s just not enough to knock off a god. Pick: Roman Reigns

Sean Rueter: If they were going to pull the trigger on this, it would have happened by now. Pick: Bianca Belair

Kyle Decker: We’re at the point in this feud where they either need to do the change or move on. With a lack of strong heels to step to Bianca if she wins here, I’m going to say she doesn’t, but I’m certainly not confident about it. Pick: Bayley

Claire Elizabeth: Yeah I don’t see it, especially after Damage CTRL lost the tag titles. They simply aren’t meant to be an especially dominant heel stable, and Bayley can move on just fine to, uh… I dunno… Pick: Bianca Belair

Cain A. Knight: Bianca Belair is right there with Roman Reigns as the strongest booked stars on the WWE roster over the last two years. I’m thinking they will save her eventual title loss for either Charlotte Flair or Ronda Rousey. Pick: Bianca Belair

Marcus Benjamin: They’re not changing titles overseas. Not this one anyway. Damage CNTRL might win something here but not this title. Pick: Bianca Belair

Geno Mrosko: No reason to think they’ll do a title change here. Pick: The Usos

Sean Rueter: FIGHT NIGHT is a regional holiday, I don’t think they celebrate it in Saudi Arabia. Pick: The Usos

Kyle Decker: Even if Jey Uso is still not at pique Ucey, they should be able to handle the Brutes here. Pick: The Usos

Claire Elizabeth: The Bloodline is so, so great right now, don’t screw it up for anything less than Sami Uso taking the tag titles. Pick: The Usos

Cain A. Knight: The Usos can’t become the longest reigning tag team champions in WWE history if they lose the belts here. Pick: The Usos

Marcus Benjamin: Time to get Ucey. Pick: The Usos

Geno Mrosko: I could 100-percent see them flipping the titles back, if only just to make sure there’s a title change on the show. Pick: Damage CTRL

Sean Rueter: Just because something kayfabe newsworthy should happen on this show, let’s say they flip the belts back to Kai & SKY en route to a feud between the current champs. Pick: Damage CTRL

Kyle Decker: Would be a bit odd to hotshot the titles like this, but it certainly wouldn’t make the belts look weaker if they did and could infuse some excitement. It’s very possible CTRL win those belts back soon. That said, I don’t see the change happening within six days of Alexa & Asuka’s win. Pick: Alexa Bliss & Asuka

Claire Elizabeth: They’ve gotten a little better about making these shows matter but they still feel a lot like glorified house shows and I think you do the babyface win, maybe with a little drama to justify another rematch in a week or two. Pick: Alexa Bliss & Asuka

Marcus Benjamin: I’m picking Damage CNTRL here. Kai-N-SKY get the belts back after losing them on Raw, and get to leave Saudi Arabia with at least one victory under their belts. Well, their new belts. Pick: Damage CNTRL

Geno Mrosko: This is WWE, and even under Triple H the heel isn’t going to win in the end … is he? Pick: Drew McIntyre

Sean Rueter: While they could put her in a KSA-approved bodysuit, I’m assuming Scarlett isn’t making the trip. They can spin a Kross loss on not having his better half in his corner. Pick: Drew McIntyre

Kyle Decker: The plan has to be to continue to build up Kross. Drew’s in a good spot where he’s pretty over. Karrion is not at that point. He needs to keep winning until fans buy in more. Pick: Karrion Kross

Claire Elizabeth: On a certain level, all I want in life is for Drew to reuse the finish from his steel cage match against Roderick Strong at Evolve 38. Trapped between the cage and the ring as Roddy hammered him with kick after kick until he passed out… brilliant stuff. Pick: Karrion Kross

Cain A. Knight: It feels like Kross needs a lot more help to get over, so I think he’s beating McIntyre again. And he probably should, given Karrion was the victim in that bizarre car crash angle. Pick: Karrion Kross

Marcus Benjamin: This really is a coin flip for me. Drew can take a loss at this point in his career, so Kross going over makes the most sense. But, Drew is Drew. Pick: Karrion Kross

Geno Mrosko: This is where Brock gets his win back to gear up for the big PPV shows to start 2023. Pick: Brock Lesnar

Kyle Decker: Going out on a limb here and going with Bobby to get the win. Feels like he needs the comeuppance after Brock screwed him. It’ll be interesting in general to see if Brock’s booking changes at all without Vince at the helm. Probably not and I’m probably wrong, but I’m sticking with it. Pick: Bobby Lashley

Claire Elizabeth: Brock is Brock, Brock is bulletproof, gotta get my boy Franklin Roberto Lashley a big win he can coast on for like five years. Pick: Bobby Lashley

Marcus Benjamin: Brock doesn’t come back to lose. Unless it’s to Roman. And he’s definitely not going overseas to lose. Pick: Brock Lesnar.

Geno Mrosko: Seems obvious they see more in Strowman and this match is probably going to give us the answer on that. Pick: Braun Strowman

Sean Rueter: As long as meat is slapped, who really cares? Pick: Omos

Kyle Decker: One of these dudes was brought back to WWE for a reason and that person isn’t Omos. Pick: Braun Strowman

Claire Elizabeth: No contest when Timmy puts down his action figures because his mom called him to the kitchen for lunch? Nah? Not buying it? Omos has had a great run but it’s far nearer to the end than the beginning. Pick: Braun Strowman

Cain A. Knight: This is Strowman’s first important match in WWE since his return, so he’s not losing. Braun’s presence on the WWE roster makes Omos obsolete, and that’s why Omos is here to put Braun over before disappearing into obscurity. Pick: Braun Strowman

The O.C. vs. The Judgment Day

Geno Mrosko: So who is going to be the neutralizer for Rhea Ripley? Pick: The O.C.

Sean Rueter: Another win for the bad guys, setting the stage for Raquel or Beth or whoever to handle the Rhea problem at WarGames. Pick: The Judgement Day

Kyle Decker: The O.C. should win this match since they’re getting re-established. But Triple H seems to love the Judgment Day. I also think whomever they choose to neutralize Rhea will happen back in the States. Pick: Judgment Day

Claire Elizabeth: House show rules, baby, Finn Balor’s gonna slip on a banana peel and the good brothers are gonna get that one-two-threeski. PS— where the hell is my Omen in the Sky gosh darn it? Pick: The OC

Cain A. Knight: This will be the night that AJ Styles and his pals find a way to neutralize Rhea Ripley for long enough to score the win. Pick: The O.C.

Marcus Benjamin: This is the match I’m looking forward to the most. Specifically how Team California neutralizes Rhea Ripley. Pick: The O.C.

That’s how we see the card playing out.