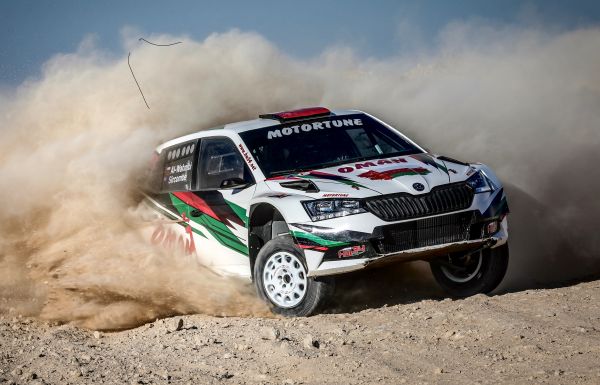 Omani rally driver Hamed Al-Wahaibi lines up against one of the strongest driver fields ever seen in the Middle East, when he tackles this weekend’s Qatar International Rally, round two of the 2022 FIA Middle East Rally Championship.

Fresh from setting a string of fastest stage times at his home rally in Oman two weeks’ ago, Al-Wahaibi is upbeat after carrying out a pre-event test and a full day of checking out the gravel special stages that lie in wait in a challenging route laid on  by officials at the Qatar Motor and Motorcycle Federation (QMMF).

The 53-year-old and his New Zealand co-driver Tony Sircombe feel that the set-up for their Motortune-prepared Škoda Fabia R2 evo gives them an excellent chance of setting competitive times against not only the regions but two of the world’s fastest drivers.

Al-Wahaibi hasn’t taken part in the Qatar Rally since 1997 when he finished third overall and first in Group N in a Mitsubishi Lancer Evolution III with legendary co-driver Terry Harryman.

Al-Wahaibi said: “The event is very well organised. I like the set-up at Losail. It’s fantastic. They have done a good job working on the desert stages. I had a bit of experience of desert rallies in ’97 and also 2010 when I did Dubai.

“I have experience, so I know how it goes. Tony (Sircombe) was really shocked. You come into areas and you cannot see if there is a track. Getting your eyes used to is the key. I guess he might suffer a bit getting used to it.

“It’s fantastic to be here and able to compare ourselves with the top guys, Nasser, Kris and Mads. Trying to be close to them would be great. We are going to fight a bit but we will see how it goes after the first few stages. I am really excited. The speeds are so high. It is fast, fast, fast. I think it is going to be a puncture rally, with some sharp rocks. Let’s hope we survive the punctures.”

Al-Wahaibi will join his rivals to tackle two runs through three gravel special stages on Friday. Action gets underway with a sprint through the short Eraida (8.89km) stage from 09.58hrs and this precedes the Al-Thakira (20.15km) and Al-Khor (16.17km) tests in the northern deserts.

Teams then return to Losail for a regroup and midday service and the three timed tests are then repeated in the afternoon.

Al-Attiyah, Meeke and Ostberg head for gripping showdown in Qatar


Mechanical disappointment for Al-Wahaibi on first leg of Oman Rally


Oman Automobile Association to host opening round of 2022 MERC


QMMF unveils challenging new Qatar round of the MERC


Full speed ahead for Kuwait International Rally in Mid-November


Hamed Al-Wahaibi fights back strongly to finish the Cyprus Rally


Al-Attiyah edges clear after late drama for Meeke in Qatar


All systems go for 2021 FIA Regional Rally Series in Qatar