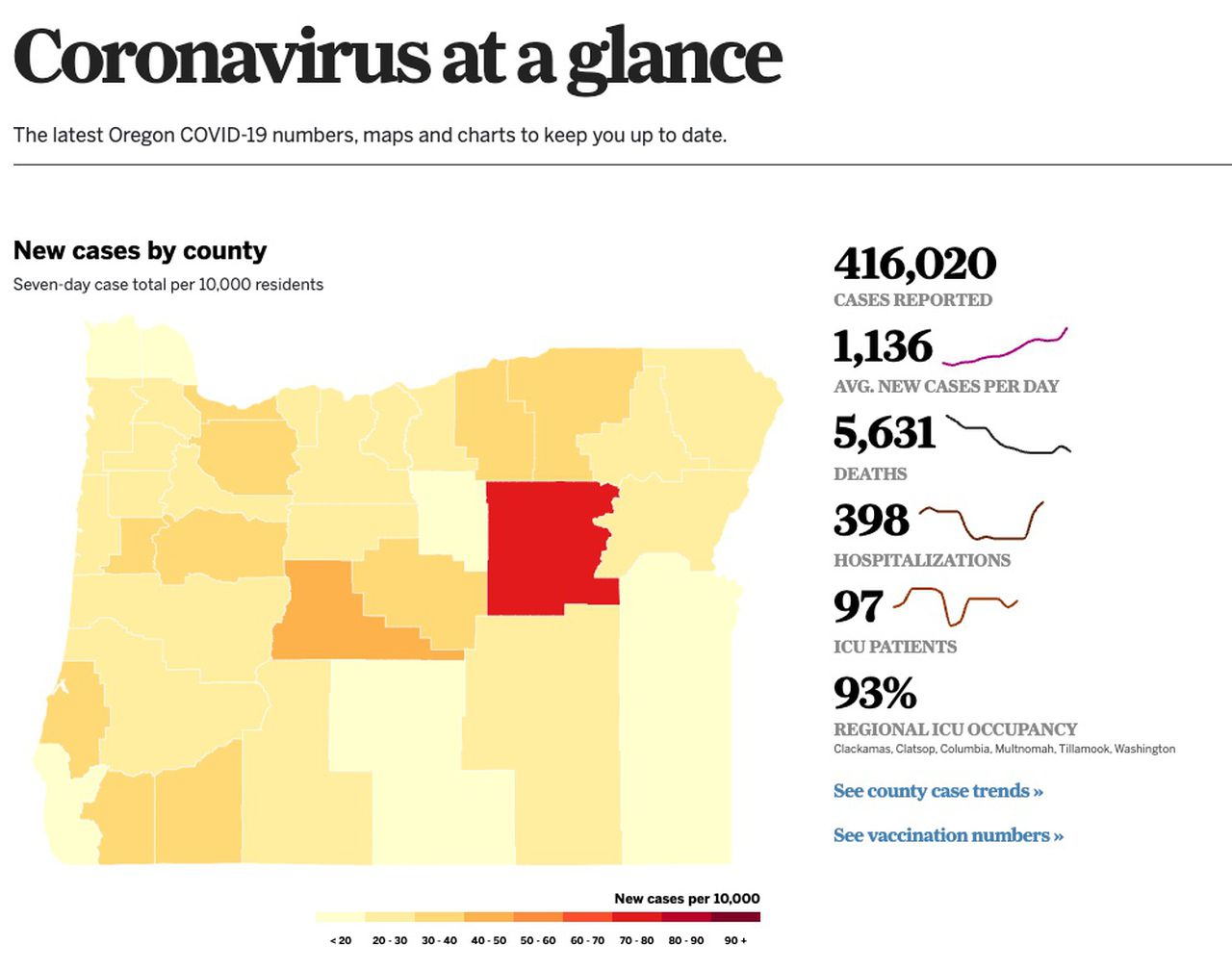 The Oregon Health Authority reported 1,900 new cases of COVID-19 across the state, the highest level of new infections seen since Sept. 21, and nearly three times some of the average daily case counts being reported in mid December.

As in other states, authorities say this new surge is being driven by the highly contagious omicron variant. Researchers at Oregon Health & Science University are forecasting a tsunami of cases. And while the new variant is generally thought to result in milder infections, experts expect a corresponding surge in hospitalizations that will cause a hospital capacity crisis similar to the one health care systems around the state experienced this fall.

It’s unclear how many omicron cases have been detected in Oregon. While the state confirmed 13 cases on Dec. 21, the health authority does not provide daily updates on cases of the new variant.

The latest OHSU forecast from last week predicts omicron peaking in the state with more than 1,200 hospitalized patients by early February, slightly above the pandemic record set Sept. 1. But hospitalized patients might reach 1,700 if Oregonians don’t embrace COVID-19 safety precautions, according to the forecast.

“The COVID-19 data OHA is reporting today show us that what we’ve been warning Oregonians about the last several weeks is coming to pass: Omicron is poised to become the state’s dominant variant and will likely drive a new surge in cases, hospitalizations and, sadly, deaths,” Dr. Tom Jeanne, deputy state health officer and epidemiologist, said in an emailed statement on Monday. “It’s a stark reminder that the fight against COVID-19 is far from over as new variants easily take hold, but also that we have the power to minimize their effects on our state by continuing to use proven tools, such as vaccines, masks and face coverings, and physical distancing.”

The Centers for Disease Control and Prevention on Tuesday estimated the omicron variant now accounts for about 59% of all COVID-19 cases in the country. That’s a significant reduction from last week’s estimate of 73%, which it revised to 23% of all cases last week. That suggests that the delta variant is still a significant factor driving cases and hospitalizations, but that omicron is quickly becoming the dominant strain.

The CDC also surprised many health care experts when it cut in half its recommended isolation period for people who test positive but show no symptoms, from 10 to five days.

Oregon officials, meanwhile, are still pushing hard on their campaign to get 1 million booster shots in Oregonians’ arms by the end of January. Since the governor announcing the initiative Dec. 17, an additional 154,197 Oregonians have received one. That’s marked progress, but still well below the state’s goal of providing boosters to 30,000 people a day. Both the University of Oregon and Oregon State University have said they will require students and staff to receive booster doses when they become eligible in the winter term.

The OHA said Tuesday that high-volume vaccination clinics around Oregon continue to provide primary and booster COVID-19 vaccines, but inclement weather is affecting some sites. The clinic at Multnomah Greyhound Park in Wood Village was closed Tuesday, while the Tektronix, Salem and Springfield sites planned to close two hours early, at 5 p.m.

The state also noted that the Jackson County Expo vaccination site has permanently closed, but added that a new indoor site has opened at The Merrick, 200 N. Riverside Ave., Medford. The Redmond Fairgrounds site is also closed this week. And the COVID testing center at the Portland Expo Center is closed through Thursday because of the weather.

Information on the sites and their operating hours can be found here.

A 71-year-old Deschutes County man died Nov. 7 at his residence. The death certificate listed COVID-19 as a cause or a significant condition contributing to death.

Since it began: Oregon has reported 416,020 confirmed or presumed infections and 5,631 deaths, among the lowest per capita numbers in the nation. To date, the state has reported 6,692,348 vaccine doses administered, fully vaccinating 2,761,515 people and partially vaccinating 279,989 people.