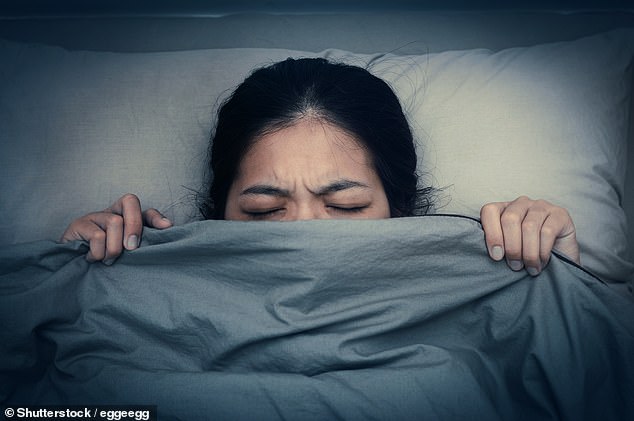 Last year many us began experiencing intense and longer-lasting dreams due to a lack of stimulation while staying home for days on end during the pandemic.

Experts found two-thirds of us were having ‘unusually vivid’ dreams and with Covid cases rapidly rising once again, it’s no surprise that social media is awash with reports of similar nightmares.

But among these reports are increasing stories of Covid causing sleep paralysis – the temporary inability to move or speak while experiencing hallucinations shortly before a person nods off or while waking.

Social media users have reported the phenomenon, which occurs because your brain is active while your body is still in sleep mode, happening for the first time after catching Covid.

Sleep therapy expert Dr. Kat Lederle, Dr Greg Potter and Hussain Abdeh, clinical director at Medicine Direct, explained to FEMAIL why both stress and viral infection could be a reason for the increase.

Sleep therapy experts explained to FEMAIL why both stress and viral infection could be a reason for the increase in sleep paralysis. Stock image

WHAT IS SLEEP PARALYSIS?

‘Sleep paralysis is the inability to move your body despite being awake as you transition into or out of ‘rapid eye movement’ (REM) sleep’ sleep expert Dr Potter explained.

‘REM sleep is when you have your most vivid dreams, and to stop you acting out these dreams your brain paralyses most of your muscles other than your heart and the ones you use to breathe. Sleep paralysis happens when this muscle paralysis persists into wakefulness.

‘Episodes can last anywhere from a few seconds to several minutes and are not inherently dangerous but can be very scary. The scariest episodes tend to involve hallucinations (sights, sounds, or feelings) that probably take place because of continued dream-like activity in some brain circuits 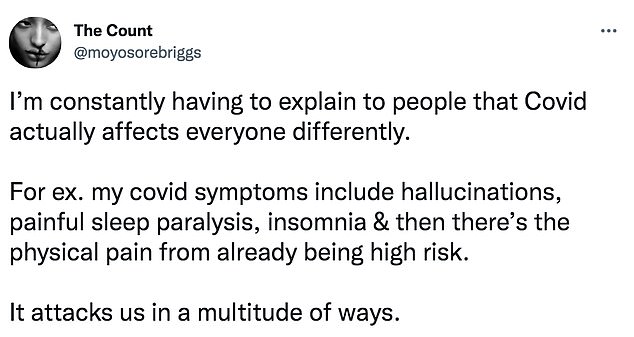 Several social media users have reported the phenomenon, which occurs because your brain is active while your body is still in sleep mode, happening for the first time after catching Covid

Hussain explained that while the exact cause of sleep paralysis isn’t clear, the phenomenon is the result of your brain being active while your body is still in sleep mode

Dr Lederle explained added further: ‘What seems to happen is that the normal REM sleep muscle atonia which stops us from acting out our dreams during this stage of sleep intrudes into wakefulness making you unable to move or talk for a few moments.’

Dr Potter added: ‘People who experience sleep paralysis tend to have a first bout in their teens. It’s also relatively common among young adults, and it’s a bit less common later in life.

‘Episodes seem to be triggered by insufficient or irregular sleep, mental health problems (e.g., PTSD) or psychological stress, and some medications. Sleep paralysis can also be due to narcolepsy, a sleep disorder characterised by high daytime sleepiness, irregular sleep-wake cycles, and sudden loss of muscle activity while awake. ‘

The study, undertaken by researchers at King’s College London and Ipsos Mori, also found just over a third of the 2,300 respondents had experienced less sleep and reckless nights, the Sunday Times reported.

These sleepless nights were in many cases caused by anxiety over finances, according to Professor Bobby Duffy, director of the Policy Institute at King’s College.

Russell Foster, the director of the Sleep and Circadian Neuroscience Institute in Oxford, added he has received reports of people having unusually vivid dreams amid the coronavirus crisis.

‘Most workers do not get enough sleep in our busy 24/7 society, which means most of us are usually sleep deprived,’ he said. ‘It is interesting that may now be being reversed.’

‘Many of us now seem to be populating our dreams with images from the current crisis, like Boris being infected.

‘Because we’re sleeping longer and more deeply, we are having more vivid dreams and remembering them better.’

COULD COVID BE CAUSING AN INCREASE?

Dr Lederle explained that while there haven’t been scientific studies investigating this in normal sleepers, Covid is a possible reason for a rise in sleep paralysis – particularly the stress of rising cases.

‘It could be the virus infection itself impacts on the sleep regulation in the brain (neurological effects of covid have been reported)’, she said.

‘But I think it is more likely that should there be an increase in sleep paralysis that this is due to the stress resulting from the big changes to how we go and live our lives at the moment, the uncertainty and anxiety that we are facing which are impacting on our sleep system.’

Hussain added: ‘Research into patients with narcolepsy found that they experienced an increase in sleep paralysis during Covid, which may be due to changes in their routines and sleep patterns.

‘An increase in nightmares, insomnia and stressful dreams has also been reported by several studies due to the pandemic. As a link has been found between these conditions and sleep paralysis, it is possible that Covid has caused an increase.’

‘If there is a link between COVID and sleep paralysis, it could be because the COVID pandemic has caused great psychological stress for many people and has made the sleep schedules of a minority of us less regular’, he said. ‘It could also be that sleep paralysis occurs in some people who have long COVID, but it’s hard to tell right now.

HOW TO PREVENT SLEEP PARALYSIS?

‘The most important thing is getting enough sleep each night’, explained Hussain.  ‘You should do what you can to get between 7 and 9 hours of sleep every night.

‘You can make this more likely by going to bed at around the same time and waking up at the same time each day. This will get your body into a routine, which makes it easier for your circadian rhythm to know when it is time to rest.

‘Getting plenty of exercise during the day, but not in the 4 hours before bedtime, can help you to feel tired and make it easier to sleep for longer.

‘Try not to sleep on your back; this can reduce the likelihood of experiencing sleep paralysis. You should also not consume caffeine or alcohol before going to bed. Do not smoke or eat a large meal in the hours before bedtime, either.

‘If the problem occurs more than once and makes you feel anxious or frightened about going to sleep, you should talk to your doctor. This is also the case if you are feeling constantly tired because you cannot sleep properly.’