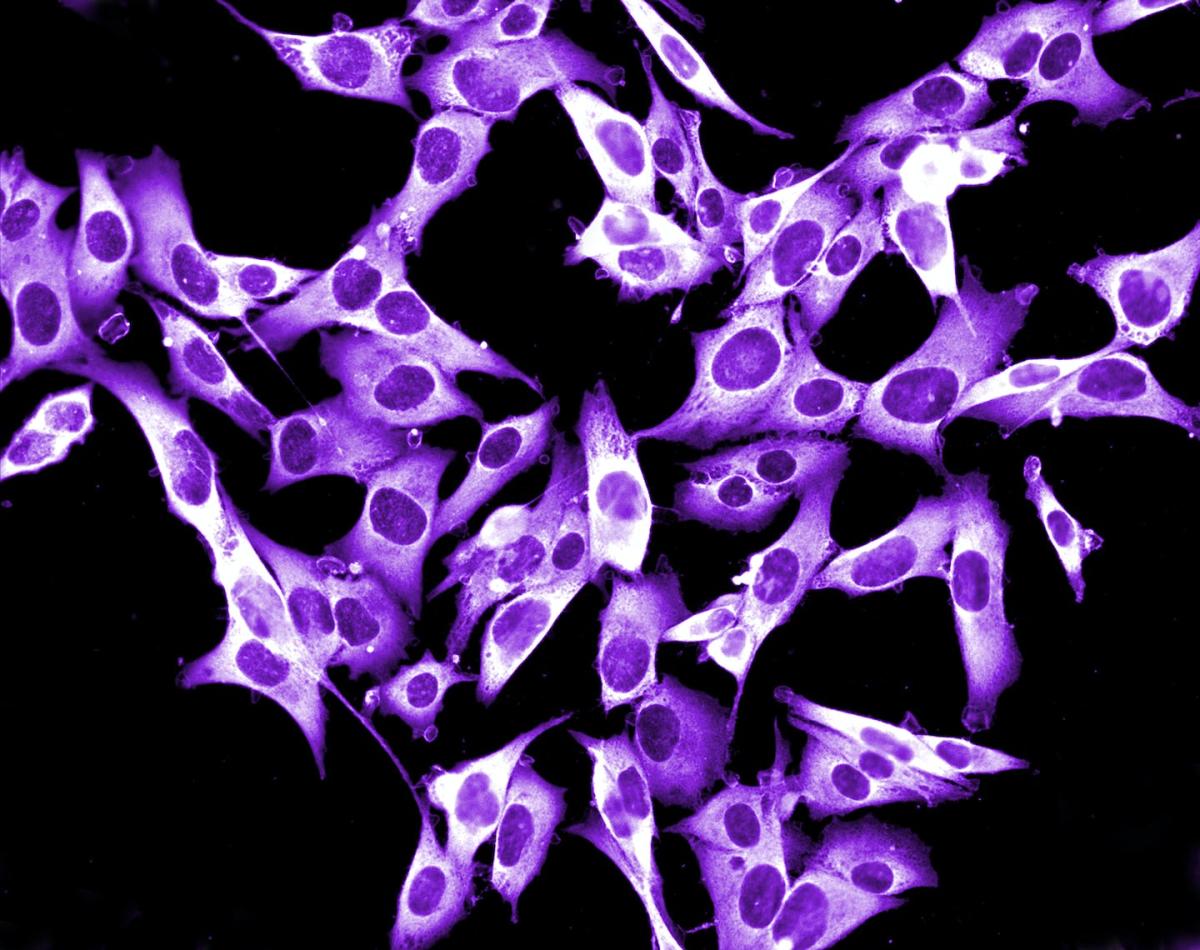 A defining characteristic of cancer cells is their immortality. Usually, normal cells are limited in the number of times they can divide before they stop growing. Cancer cells, however, can overcome this limitation to form tumors and bypass “mortality” by continuing to replicate.

Telomeres play an essential role in determining how many times a cell can divide. These repetitive sequences of DNA are located at the ends of chromosomes, structures that contain genetic information. In normal cells, continued rounds of replication shorten telomeres until they become so short that they eventually trigger the cell to stop replicating. In contrast, tumor cells can maintain the lengths of their telomeres by activating an enzyme called telomerase that rebuilds telomeres during each replication.

Telomerase is encoded by a gene called TERT, one of the most frequently mutated genes in cancer. TERT mutations cause cells to make a little too much telomerase and are thought to help cancer cells keep their telomeres long even though they replicate at high rates. Melanoma, an aggressive form of skin cancer, is highly dependent on telomerase to grow, and three-quarters of all melanomas acquire mutations in telomerase. These same TERT mutations also occur across other cancer types.

Unexpectedly, researchers found that TERT mutations could only partially explain the longevity of telomeres in melanoma. While TERT mutations did indeed extend the life span of cells, they did not make them immortal. That meant there must be something else that helps telomerase allow cells to grow uncontrollably. But what that “second hit” might be has been unclear.

We are researchers who study the role telomeres play in human health and diseases like cancer in the Alder Lab at the University of Pittsburgh. While investigating the ways that tumors maintain their telomeres, we and our colleagues found another piece to the puzzle: another telomere-associated gene in melanoma.

Cell immortality gets a boost

Our team focused on melanoma because this type of cancer is linked to people with long telomeres. We examined DNA sequencing data from hundreds of melanomas, looking for mutations in genes related to telomere length.

We identified a cluster of mutations in a gene called TPP1. This gene codes for one of the six proteins that form a molecular complex called shelterin that coats and protects telomeres. Even more interesting is the fact that TPP1 is known to activate telomerase. Identifying the TPP1 gene’s connection to cancer telomeres was, in a way, obvious. After all, it was more than a decade ago that researchers showed that TPP1 would increase telomerase activity.

To confirm our hypothesis, we then inserted TPP1 mutations into melanoma cells using CRISPR-Cas9 genome editing. We saw an increase in the amount of TPP1 protein the cells made, and a subsequent increase in telomerase activity. Finally, we returned to the DNA sequencing data and found that 5% of all melanomas have a mutation in both TERT and TPP1. While this is still a significant proportion of melanomas, there are likely other factors that contribute to telomere maintenance in this cancer.

Our findings imply that TPP1 is likely one of the missing puzzle pieces that boost telomerase’s capacity to maintain telomeres and support tumor growth and immortality.

Knowing that cancer use these genes in their replication and growth means that researchers could also block them and potentially stop telomeres from lengthening and make cancer cells mortal. This discovery not only gives scientists another potential avenue for cancer treatment, but also draws attention to an underappreciated class of mutations outside the traditional boundaries of genes that can play a role in cancer diagnostics.

Jonathan Alder receives funding from the National Heart, Lung, and Blood Institute to support this work.

Pattra Chun-On does not work for, consult, own shares in or receive funding from any company or organization that would benefit from this article, and has disclosed no relevant affiliations beyond their academic appointment.