Miami Heat’s Jimmy Butler scores 45 in Game 2 win, says he’s a ‘different player’ than he was during torrid Finals run in NBA bubble 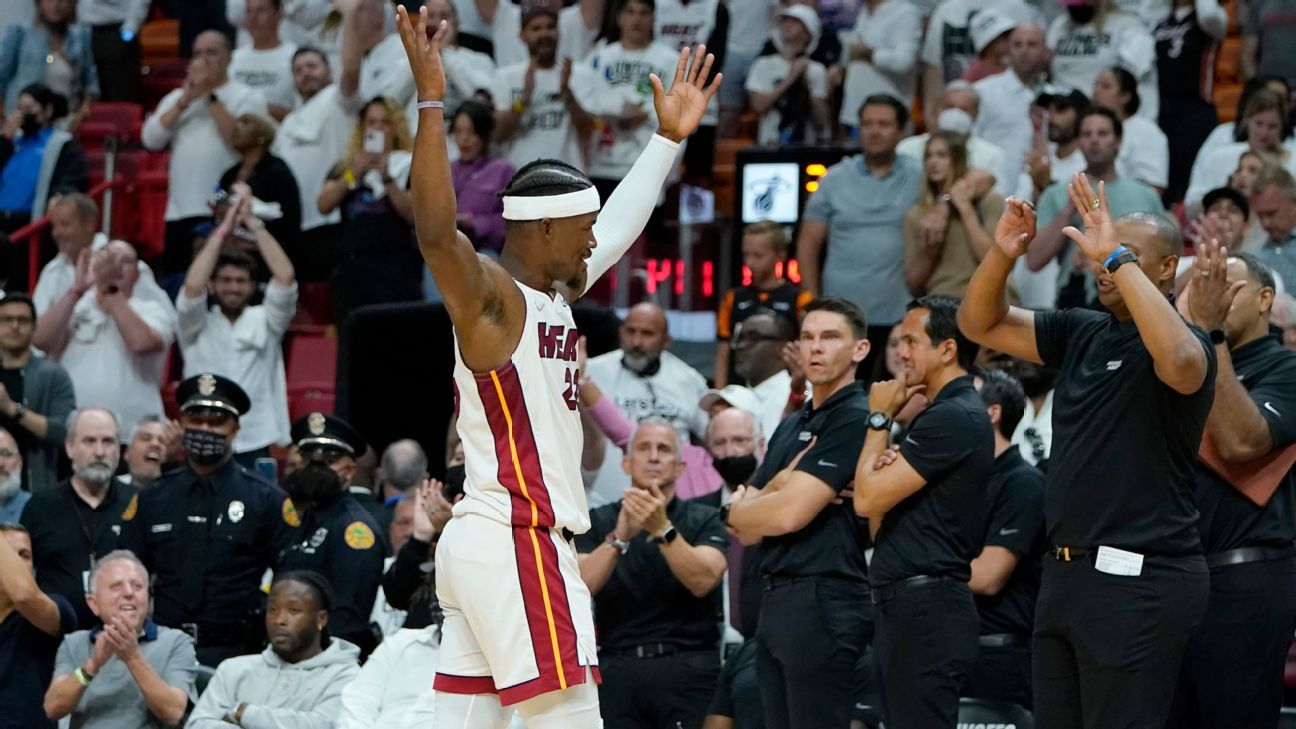 MIAMI — The vision of Jimmy Butler, slumped over a baseline barricade, during the 2020 NBA Finals in the Orlando bubble has been painted into the tapestry of the league’s collective consciousness. In that series, the Miami Heat star went toe-to-toe with LeBron James and the Los Angeles Lakers, notching 35- and 40-point triple-doubles while pushing L.A. to the brink.

The Butler who scored a career playoff-best 45 points in the Heat’s 115-105 win over the Atlanta Hawks on Tuesday to go up 2-0 in their first-round series, has changed, he said, since that defining run.

“I am a different player now than I was then,” Butler said after a personal 7-0 run in the waning minutes of Game 2’s fourth quarter increased Miami’s lead from three to 10 to secure the victory. “I just always want to play basketball the right way and do whatever it takes to help this team, this organization win. That’s why they brought me here.”

After Butler joined the Heat as a free agent in 2019, he led the team to within two wins of the league title in the bubble, but Miami then bowed out to the eventual champion Milwaukee Bucks in a first-round sweep last year.

His transformation has been triggered by the addition of Kyle Lowry, who brought championship experience with him when he left the Toronto Raptors to sign with the Heat last summer.

“I’m not as ball-dominant as I was in the bubble,” Butler said. “We got a point guard, and that’s Kyle, and I love him being a point guard.

“I just get to go out there and try to score. And if I can’t score, pass the ball. We’re a different team; I’m a different player.”

On Tuesday, Butler also was a different player than in the regular season, when he shot just 23.3% on 3-pointers. Butler went 4-for-7 from deep in Game 2, while Atlanta marksman Trae Young shot 2-for-10 on 3s, bringing his series total to just 2-for-17.

Miami coach Erik Spoelstra said Butler’s sudden explosion from the outside reminded him of the only other player besides James in team history to match Butler’s three career 40-point playoff games for the franchise: Dwyane Wade.

“It actually is a good comparison, because if you get in those pressure moments and the moments of truth, if you’re on the other side, would you ever want to just give Dwyane Wade an open 3? You would not,” Spoelstra said. “Because he’s a killer. He’s going to seize that moment. And Jimmy has a lot of those same qualities. You can say whatever the percentage is — throw those all out when it becomes about winning. He’ll find a way to kill you.”

Only he’ll do it in his own way. On Tuesday afternoon, Butler passed the time leading up to tipoff by sharing on his Instagram story that he was listening to “I Want It That Way” by the Backstreet Boys and playing the card game Spades.

“Whooped their tail, too,” Butler said of the card game. “I’m a huge fan of the Backstreet Boys and I just love to compete at anything.”

Lowry said Butler’s fun-loving ways are only part of the equation.

“I think you have to have that dark side and kind of that demeanor to push other people to be better,” he said of Butler. “But you also have to have the talent and the work ethic to do it. You can talk about it, but if you’re not about it and you don’t show, it’s a difference. And he shows it.”

Butler finished 15-for-25 from the field in Game 2 — joining Wade and James as the only Heat players with that many made shots in a playoff game — and was 11-for-12 from the foul line. He had zero turnovers and zero fouls to go with his 45 points, becoming the first player since Hawks legend Dominique Wilkins in 1988 to post a postseason stat line like that.

And Butler had two steals, one of them coming on an errant pass by Young to give the Hawks guard 10 turnovers for the game — a record for a Heat playoff opponent.

“Just equally as impressive as his offense, he did some amazing things defensively,” Spoelstra said.

The Butler of old took the Heat to the precipice of a champagne celebration, only to fall just short. His coach said the player leading the Eastern Conference’s No. 1 team this season is built to go all the way.

“Everybody is looking for the same, conventional box for winning a championship. It can be done in a lot of different ways. Jimmy is a max guy, a go-to guy, a killer,” Spoelstra said. “However you want to describe it, who cares? He knows how to win, he knows how to help teams win, and the game is played on both sides of the floor, and it’s played with IQ, it’s played with toughness, it’s played with making plays in those winning moments. It’s not necessarily what everybody thinks it is. …

“He’s just a winner, and he showed that tonight.”