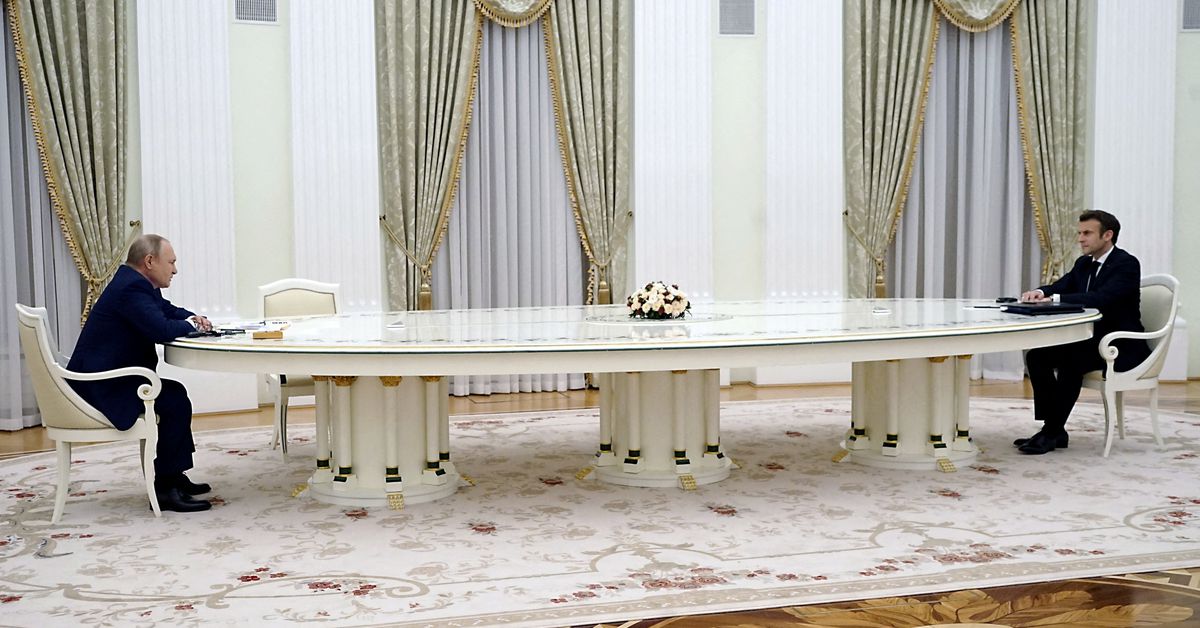 PARIS, Feb 12 (Reuters) – Russian President Vladimir Putin gave no indication in a phone call with French President Emmanuel Macron on Saturday that he was preparing to invade Ukraine, a French presidency official said.

The two leaders spoke at a time of high tension over Russia’s massing of troops near the Ukrainian border, with Washington saying on Friday that Moscow could invade at any moment. Russia has denied it plans to invade.

“We see no indication in what President Putin says that he is going to go on the offensive,” the official told reporters after Macron and Putin spoke on the phone for nearly 90 minutes.

“We are nevertheless extremely vigilant and alert to the Russian (military) posture in order to avoid the worst.”

Separately, the Kremlin said that Putin had highlighted during the call with Macron a “lack of a substantive response from the United States and NATO to well-known Russian initiatives”. This referred to a series of Russian security demands, including that it bar Ukraine from ever joining NATO.

Putin and Macron also discussed the situation related to “provocative speculations” around an allegedly planned Russian invasion, the Kremlin said.

The Elysee official said France recommended that French nationals avoid trips to Ukraine and preparations would be made for embassy staff and their families to leave the country if they wanted.

The French ambassador would review the situation for the some 1,000 French nationals in the country, many of whom hold both French and Ukrainian citizenship, the official said. The United States and many other countries have urged citizens to leave Ukraine amid fears of an invasion.

Macron visited Moscow earlier this week and then and in their call on Saturday the two discussed ways to move forward on the implementation of the Minsk Agreements on achieving peace in eastern Ukraine, as well conditions for security and stability in Europe, the Elysee said separately in a statement.

Macron also spoke on Saturday with German Chancellor Olaf Scholz as well as Ukrainian President Volodymyr Zelenskiy, and was due to speak with U.S. President Joe Biden.

In the call with Zelenskiy, Macron restated his support for the Ukraine’s sovereignty and territorial integrity, the Elysee said.

Scholz is due to visit Kyiv on Monday followed by Moscow on Tuesday, and the Elysee said the French and German positions were “perfectly aligned”.

Share
Facebook
Twitter
Pinterest
WhatsApp
Previous articleBrad Binder confident of a better RC16 in qualifying: ‘We can have a good day tomorrow and head to Qatar’
Next articleAfter Covid, risks of heart problems remain elevated for up to a year
RELATED ARTICLES
World

Afghan evacuees: Life in the US isn’t what they expected

Apple warns of security flaw for iPhones, iPads and Macs that allows hackers to access devices