HomeQatarQatar-Japan diplomatic relations at their best, 50 years on
Qatar

Qatar-Japan diplomatic relations at their best, 50 years on 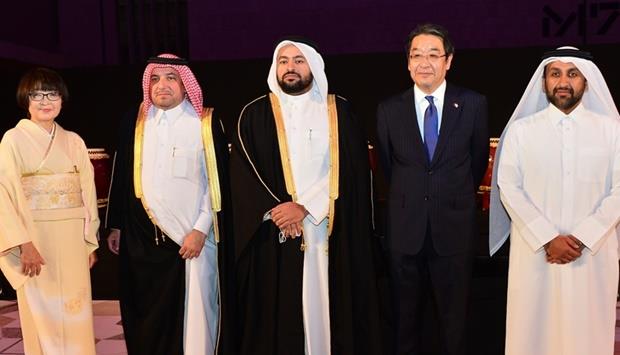 The 50th anniversary of establishing diplomatic relations between Qatar and Japan yesterday highlights the two countries’ strong and deep-rooted ties – seen to reach greater heights in a post-pandemic era.
“Japan was one of the first countries to establish diplomatic relations with Qatar following its independence, and today after 50 years, we can probably say that our relations with Qatar is at its best,” Japanese ambassador Satoshi Maeda said at a reception held at Msheireb Downtown Doha on Friday.
The event, which was attended by HE Dr Mohamed bin Abdulaziz bin Saleh al-Khulaifi, Qatar’s Assistant Minister of Foreign Affairs for Regional Affairs; Ministry of Foreign Affairs chief of protocol, ambassador Ibrahim Yousif Abdullah Fakhro; and ambassadors from different embassies in Doha; among other guests, also hosted a“Together to the Future – Projection Mapping Event” and a cultural presentation as part of the celebration.
Speaking to reporters, HE Minister Dr al-Khulaifi expressed confidence that Qatar will enhance commercial and investment cooperation with Japan,“hoping that we can touched-based on other aspects as well in the future.”
“We are enhancing (our relations) more on cultural and educational sides but we are quite open for further ways of collaboration with Japan as we know that this is a very important country for the State of Qatar,” HE the Minister said, adding that expanding these aspects in different angles will open more doors and opportunities for both countries.
Maeda noted that the two countries witnessed their first strategic dialogue between the foreign ministers of Japan and Qatar last year,“which is based on the comprehensive partnership that was declared in 2013 and later reinforced in 2015”.
“Friendship, support, and above all, trust are the words that best describe our relations with Qatar,” the envoy stressed, noting that Qatar proved to be“a true friend to Japan” not only delivering a stable supply of LNG over the years – which supported Japan’s economic growth for several years – but also“at the time of real need”.
He said that Qatar was one of the first countries to help Japan when an earthquake struck its eastern part in 2011, and also boosting its recovery with an additional supply of 4bn tonnes of LNG and assistance of $100 million in aid – which“Japan will never forget.”
On the other hand, Maeda said that at the same time, Japan has been supporting the Qatar National Vision 2030, citing that this National Vision,“which emphasizes social and environmental development, industrial diversification, and human resource development”, present a huge opportunity for the countries to expand their cooperation on these fields.
“It is true that economic exchange has been the backbone of our relationship for more than five decades, however, as the international community undergoes major changes such as globalisation, the shifting balance of power, the rapid development in digital technology, and environmental issues that were never as imminent as today, both Japan and Qatar must tackle various challenges in order to adopt to all these issues,” the envoy said.
“Through such efforts by our two countries, I believe that Japan and Qatar relations have come to a point where both countries can build a new strategic relationship beyond the energy security.

“And already looking ahead to a post-pandemic era, our bilateral relations will be further strengthened through heartwarming people-to-people exchanges,” Maeda stressed.
With less than 10 months to go for the hosting of the first FIFA World Cup in the region, he said he feel excited and fortunate to be in Qatar“in this landmark year and I truly hope that Japan’s National Team will make it to the prestigious football tournament in Qatar.
“Our heart is full of abundant memories of 50 years and our eyes are already aiming for the next phase of the relationship, (dubbed as)“Together to the Future”,” he said.
Maeda thanked Japanese companies that significantly contributed to the development of Qatar’s infrastructure, and the Qatari companies as well“that were loyal to Japanese products all those years and great people of both countries who proved that borders and language difference are of no significance for the friendship to prosper”.