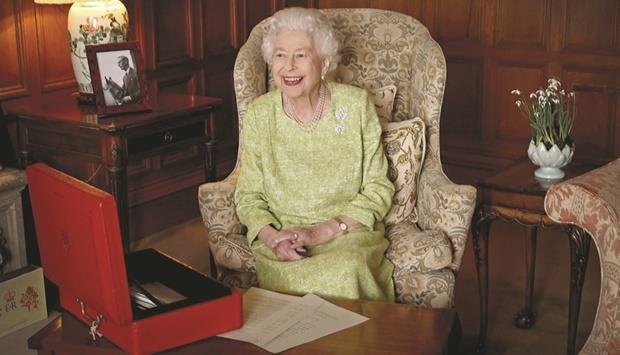 Queen Elizabeth II yesterday became the first British monarch to reign for seven decades, announcing her“sincere wish” that Camilla, the wife of her heir Prince Charles, should ultimately be known as Queen Consort.
Britain’s longest-serving monarch acceded to the throne aged 25 on February 6, 1952, following the death of her father King George VI.
She marked the historic date quietly at Sandringham, her estate in eastern England where her father died. But in a major statement on the future of the royal family, the 95-year-old released a message to the nation, saying“it is my sincere wish that, when that time comes, Camilla will be known as Queen Consort”.
This means Camilla, now 74, would be crowned alongside Charles, now 73, and known to the public as Queen Camilla, royal experts said.
Charles said the couple were“deeply conscious of the honour represented by my mother’s wish”, which would accord Camilla the full title of a monarch’s wife. He praised Camilla, saying:“my darling wife has been my own steadfast support throughout”.
The heir-to-the throne also paid tribute to the Queen’s“devotion to the welfare of all her people”, which“inspires still greater admiration with each passing year”.
The Queen said she hoped that when Charles becomes king, the British people would give him and Camilla“the same support that you have given me”.
Camilla was long vilified for her role in the break-up of Charles’ marriage to Princess Diana.
Recognising the sensitivities, when the couple married in 2005, the royal family announced she would be known as Princess Consort after Charles became king. But she has gradually won plaudits as the future king’s loyal wife. Londoners were divided over the announcement.“I’m delighted. I think it’s high time,” said Angela Roberts, an 80-year-old retiree.
“It’s before my time but a lot of the people who grew up with Diana being the next Queen effectively, they feel like she was wronged by the royal institution,” said Tobias Fox, a 24-year-old software engineer.
“I don’t think a lot of people will be too happy that Camilla has got this role.”
“I think she’ll do well, but I think there will always be that shadow of the past that overcasts her reign,” said Alice Tomlinson, a 25-year-old working in marketing.
Stressing that the Queen is still actively working, Buckingham Palace released a photo taken at Sandringham this week showing her going through one of her famous red dispatch boxes used for government business.