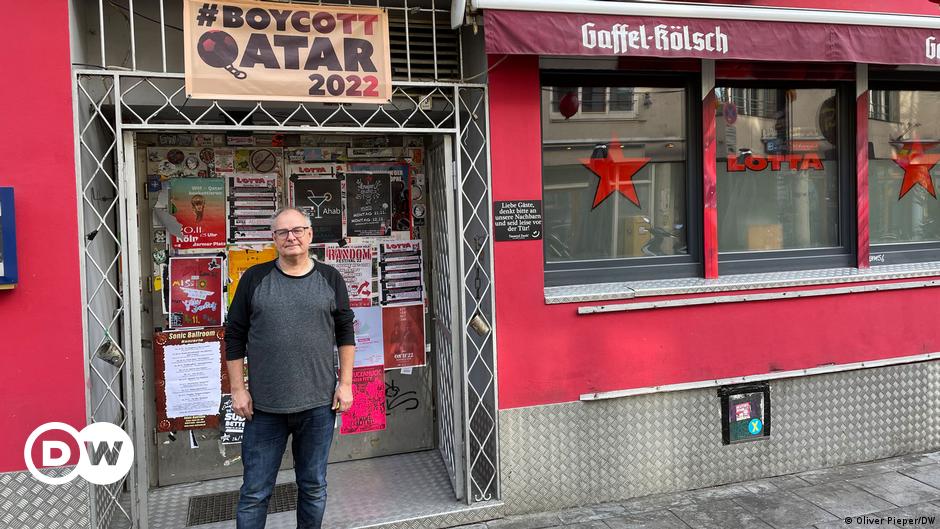 For 27 years, the cult pub Lotta in Cologne has witnessed all the electrifying moments in football. When FC Köln scores a decisive goal in extra time, the whole bar almost explodes. Complete strangers hug each other drunk from victory. Kölsch beer flows in streams over the bar. The atmosphere gives you goosebumps.

With its two big screens, Lotta pulls in the punters when Germany’s men’s national team is playing, too. The collective primal scream after Mario Götze’s goal in the 2014 World Cup final against Argentina has gone unforgotten.

So it would take quite something for Lotta co-owner Peter Zimmermann, a passionate football fan and season ticket holder at his beloved “Effzeh” — FC Köln for the nonlocals — for 20 years, to make a decision that many landlords and landladies in Germany are making right now: For four weeks, the TVs at Lotta won’t be showing any matches of the soccer World Cup, which kicks off in Qatar on Sunday.

“We want to set an example against this thoroughly corrupt FIFA system, where it’s really all about money and human rights and the football culture don’t matter at all,” Zimmermann tells DW. “And of course Qatar tops it all off: the oppression of women, discrimination against homosexuals and the appalling working conditions.”

When the World Cup kicks off on Sunday evening with the opening match between Qatar and Ecuador, Lotta’s doors will be closed. On Monday night, when the US meets Wales, punters will be testing their trivia skills at a pub quiz. And Tuesday, while France plays Australia, the pub will be hosting a panel discussion on the situation in Qatar, FIFA policy and the boycott. Dart and foosball tournaments, film screenings and playing the World Cup on Playstation will follow. The protest at Lotta has gone viral. Even a Japanese television team turned up in the southern Cologne district that is home to Lotta.

“The closer the World Cup got, the more we realized that Qatar is the straw that breaks the camel’s back and we don’t want to support that,” says Zimmermann. “In April, we made our boycott public and hung up a banner saying ‘Boycott Qatar.’ The reactions were initially positive across the board, even though we were still in a minority position at the time.”

For the first time in his life, Zimmermann doesn’t know the World Cup schedule inside out — something previously unthinkable. But it’s not just Lotta that’s taking a stand. Compared to previous tournaments, enthusiasm for the World Cup in Qatar is noticeably limited. No cars with German flags precariously stuck on the windows, no swapping footballer stickers, no sweepstakes in the office. And, because the World Cup is being held in winter, no open-air viewings.

The German sports retail chains Intersport and Sport2000 have complained that sales of World Cup jerseys have fallen by up to 50% compared to the last men’s World Cup four years ago. According to a recent survey by the opinion research institute Infratest dimap, more than half of Germans are also considering completely ignoring the World Cup.

In the meantime, Lotta has also removed all beer bottles with a FIFA World Cup logo from the bar. Admittedly, a handful of critical comments have recently trickled in via Instagram or by email, in which the owners have been called hypocrites for heating their pub with gas from Qatar.

But Zimmermann says he doesn’t regret for a second that he made the pub a FIFA-free zone, although sales will certainly suffer from the boycott over the next four weeks.

“Of course, the football World Cup is always good additional business, especially when Germany is playing. But we have our regular guests and I hope other people will come here for our alternative program. They say, ‘We like football, but now with Qatar, it’s just too much for us.'”

Dietrich Schulze-Marmeling will also come to the Lotta next Tuesday. Not as a guest, but as a speaker. The author of numerous football books is, if you like, something like the team captain of the anti-Qatar-World-Cup protest movement. The die-hard Borussia Dortmund supporter launched the #boycottqatar2022 initiative two years ago and even wrote a book about the Qatar controversy and why the World Cup shouldn’t have taken place in the desert nation in the first place.

Schulze-Marmeling says: “I was surprised by the extent of the protests and how massive they’ve become in recent weeks, especially among fans on the last three Bundesliga match days. I think something’s just built up over the years and Qatar was then for many even more problematic than the [2018 World Cup in] Russia. As far as Russia was concerned, a lot of people said, ‘alright, at least it’s a big country with a certain tradition of football. But Qatar, with its 350,000 citizens is just absurd for a lot of people.'”

All those who support the call to action are encouraged to inundate FIFA with letters of protest, not buy any products bearing the World Cup logoand refrain from traveling to Qatar and watch parties in Germany. The goal of Schulze-Marmeling and his fellow campaigners: It should no longer be attractive to “present the World Cup in this perverted way and continue to ruin football.”

But what about the people still tuning in to watch the matches in the end? “I’m not judging anyone. I can actually understand that very well,” says Schulze-Marmeling. “And will everyone who says right now that they don’t watch really stick it out if Germany plays well? The important thing is to not stop looking at the tournament with a critical eye. The debate must continue during the tournament and the media also has to be aware that criticism cannot be ignored. We need a discussion on how we want to shape the future of football.”

Germany, in particular, with its critical football fan scene, which consistently denounces racism, homophobia and the increasing influence of investors is at the forefront of this debate. But for supporters of many World Cup participants, the local human rights situation in Qatar and corruption at FIFA hardly play a role. Football outshines everything. People mocking the protest say that Germany will be world champion of morals. But Schulze-Marmeling is happy to accept the title.

“If awareness of human rights issues is particularly prominent in German society, then that’s something we can be proud of. When you’re accused of living in your German bubble, I always say: ‘Sorry, but other countries are also starting to think differently, and they’re more likely to look on with a certain sense admiration for what’s going on here [in Germany].’ We’re getting a lot of inquiries, particularly from England, asking: ‘How did you manage to start the protests? We’d like to do that too, can you help us?'”

This article was translated from German.