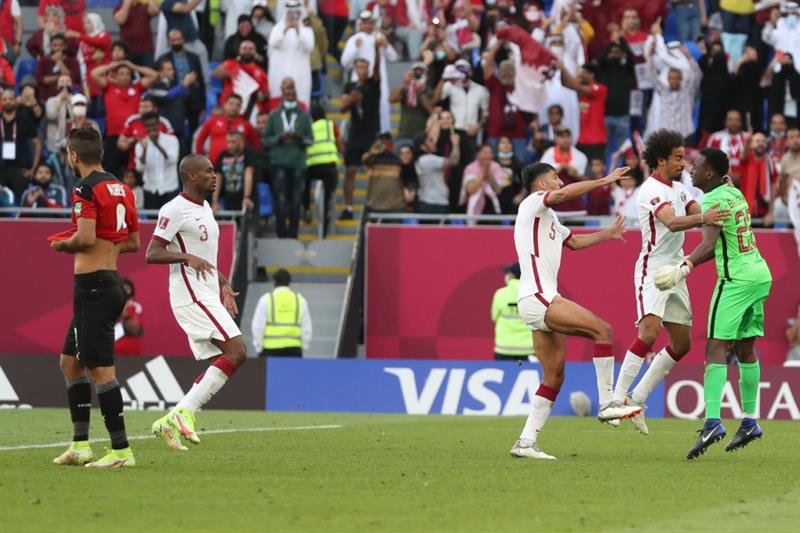 Qatar s players celebrate their win in the FIFA Arab Cup 2021 football match for third place between Egypt and Qatar at the 974 stadium in the capital city of Doha on December 18, 2021 (AFP)

The Pharaohs, who conceded a last-gasp own goal in a bitter semi-final loss to Tunisia, had the lion’s share of goal-scoring chances throughout the 120 minutes but could not find a decisive winner as Qatar secured the tournament’s bronze medal.

Egypt gained a shootout lead after Hassan Al-Haydos fired Qatar’s first penalty wide on the second attempt after his original effort, which was saved by Mohamed El-Shennawi, was ordered re-taken as the keeper was deemed to have stepped off the goal-line.

But Qatar levelled things up when Ahmed Hegazi’s third penalty was blocked. In the first attempts of a sudden death, Karim Boudiaf converted for Qatar while Mohamed Sherif’s tame shot was easily saved by keeper Meshaal Barsham.

Both sides had tired legs, struggling to apply pressure and sitting back for long periods.

Egypt’s first chance fell to midfielder Amr El-Sulaya, who side-footed wide following a cut-back from winger Ahmed Refaat after the latter had skipped past his challenger down the left.

Qatar also spurned a clear-cut chance of their own early in the second half, striker Almoez Ali firing over the bar with the goal gaping after Tarek Salman headed the ball into his path.

Egypt were then largely in control, with Qatar indebted to Barsham for pulling off a string of fine saves.

Striker Sherif could have won it for Egypt with four minutes remaining when he latched onto a threaded pass from Hamdi Fathi to break clear, only to see his low shot saved by Barsham.

Barsham was also called into action in the first half of extra time, making a double save to deny successive efforts from substitutes Marwan Hamdi and Mostafa Fathi.

The match then went into penalties, where Qatar prevailed as Egypt endured another disappointing night.