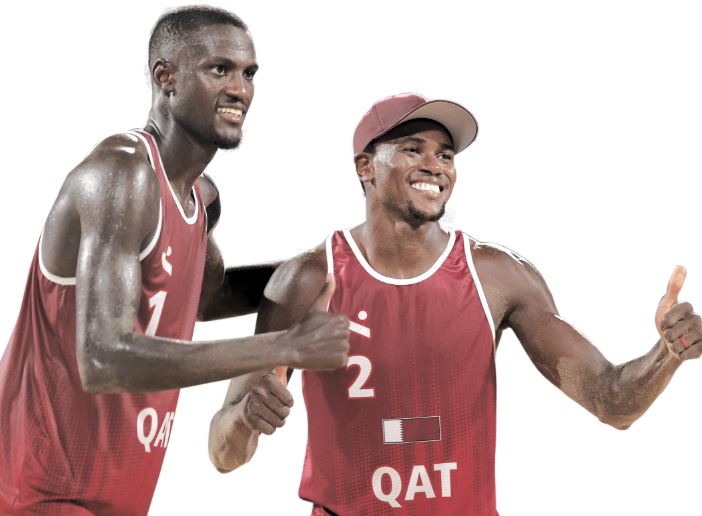 Doha: With the third Challenge event on the Volleyball World Beach Pro Tour coming up in the Qatari capital Doha, the men’s entry list includes representatives from 24 different countries with home heroes Cherif Younousse and Ahmed Tijan, the number one team in the FIVB World Ranking, leading the way.

Doha will welcome many of the top teams in the world from May 5 to 8. And as per the now familiar Challenge tournament format, the $75,000 event will feature a 24-team main draw starting with modified pool play followed by single eliminations. A total of 16 pairs are seeded directly into the main draw.

The other eight will emerge from the 32-team knockout qualifiers.
When Cherif and Ahmed made their amazing breakthrough in 2021, they medalled at five of the seven 4-star events they participated in on the FIVB Beach Volleyball World Tour, earned a Tokyo 2020 Olympic bronze and climbed to the number one spot in the World Ranking.

However, with Doha being one of the 4-star events at which they failed to make it on to the podium last year, the Qatari duo owe the Doha crowd a home sand triumph.
And Cherif and Ahmed have already shown that they are in great shape this year by winning gold at their Beach Pro Tour debut in Rosarito, Mexico last month.
Joining the Qataris in Doha will be an impressive list of Dutch teams, headed by 2013 world champions and 2016 Olympic bronze medallists Alexander Brouwer and Robert Meeuwsen.

The pair were runners-up in Rosarito and are currently fifth in the World Ranking – they are seeded second in Doha.
Also representing Dutch beach volleyball, the world’s number six, Stefan Boermans and Yorick de Groot are seeded fourth.

Christiaan Varenhorst and Steven van de Velde, who missed the first two stops on the Beach Pro Tour and made their debut at the Itapema Challenge in Brazil last week, are ninth on the entry list for Doha.

Another two Dutch pairs, including Leon Luini and Ruben Penninga, who made a sensational run to the podium at Itapema, will start their Doha campaign in the qualifiers.
The top three seeds in the entry list are completed by Michal Bryl and Bartosz Losiak. The new Polish pairing made an excellent start on the Beach Pro Tour by winning Tlaxcala Challenge gold and making it to the Rosarito Elite16 semifinals in Mexico.

The Brazilian partnership of Evandro Gonçalves, a 2017 world champion and a 2015 World Championship bronze medallist, and Alvaro Filho, a 2013 World Championship runner-up, will play in the Doha main draw.
So will Germany’s Clemens Wickler, a finalist at the last edition of the World Championships in 2019, and his new partner Nils Ehlers.

Kanchana off to Qatar to discuss fuel needs