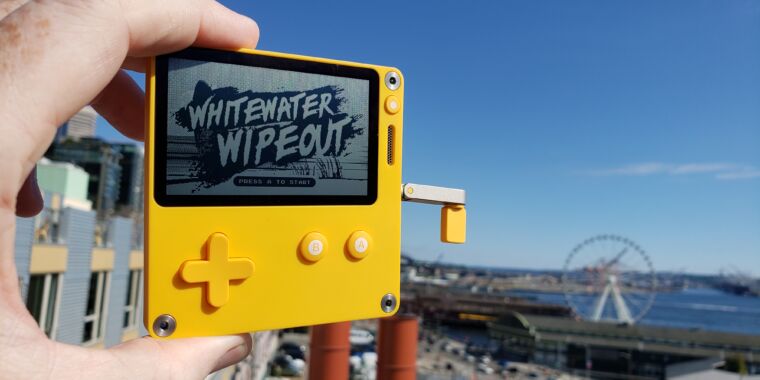 The cute, portable, and banana yellow $179 Playdate console is now shipping to its first batch of preorder customers, so we’re now free to review the quirkiest gaming system in years.

Thanks to chip shortages and general manufacturing chaos, buying Playdate is much less fun than using it. If you preordered the system in July 2021 after reading my hands-on preview, great. If you waited for a proper review like this one, however, expect a backorder queue of no fewer than eight months. (At least Panic say it will make as many Playdates as people want to buy, instead of pulling an NES Classic and limiting production.)

To those who ran with my previous optimism about Playdate’s squat form factor, quirky games, and unique crank control system, I am happy to report that I didn’t lead you astray—so long as you heeded my specific bias. As I wrote in July:

I’m partial to experimental, quick-fire indie fare, which the Playdate is clearly tailored toward. This most often means lo-fi point-and-click adventures, arcadey score-chasers, and quirky platformers—either with a crank or without. If that sounds like a fresh breath of air—possibly akin to the earliest days of devs exploiting the novelty of touchscreens on either the earliest iPhone or the original Nintendo DS—then Panic’s hardware and software ecosystem will hold up their end of the bargain to affirm your bias.

That preview came after testing just four of the system’s included games. This week, I can more fully answer the question of what Playdate delivers for $179, including a look at all 24 of its “first season” games.

Panic’s earliest Playdate sales pitch included the “surprise factor” of two new games unlocking each week for 12 weeks. If you’re buying Playdate to enjoy the ritual of tearing off virtual wrapping paper and revealing surprises on a weekly basis, this review merely summarizes what you can expect from the system’s included games. Think of it like picking up wrapped gifts and shaking them a few times.

If you’d rather know exactly what $179 buys you after 12 weeks, I have broken out game-specific mini-reviews into a separate report. That report clarifies how many weeks you’ll have to wait for each game to unlock, as well.

I hope you’ll come away knowing whether Playdate is your perfect boutique portable or whether you’d be happier investing $179 into something like a Raspberry Pi, an Analogue Pocket, or a Steam Deck.

While reading my mix of praise and criticism, keep in mind that I have an ideal Playdate owner in mind: a wide-eyed, world-questioning pre-teen, eager for a variety of portable, accessible gaming experiences that combine classic gameplay principles and silly text with reckless, crank-fueled abandon. (This may also apply to the wide-eyed pre-teen inside many of us.)

Though this is a “final” review, it recaps much of what I already wrote about the “near final” hardware in July 2021. In terms of physical form factor and general usability, Playdate then is seemingly identical to Playdate now.

Meaning: I’ve never seen a lightweight game system with this combination of comfort, control precision, and screen clarity that also manages to run simple games smoothly. Its portable gaming prowess is unsurprising, as the music-gadget wizards at Teenage Engineering are behind much of Playdate’s design. I’m cool with the compromises required to squeeze so much into so little, but interested buyers should keep those compromises in mind.

Playing the entire “first season” of 24 included Playdate games hasn’t changed my general impression of the device; instead, it reminded me that there’s only so much comfort owners can expect from a 3×3 inch (74×74 mm) device. As I previously wrote:

Playdate fits neatly in an adult-sized palm, which might lead you to expect claw-hand woes once you hold it with two hands (think Nintendo’s Game Boy Micro). Panic avoids this pitfall with a few crucial design-language tricks, including thinness (9 mm), lightness (3.03 oz / 86 g), and adequate width. Combine those three factors, and the system lands in adult hands without requiring awkward weight bracing.

So the Playdate gets away with a smooth, rubberized finish like the exterior of a vinyl toy. This never feels “light and cheap”—since that lightness and cheapness are crucial to its handheld gaming comfort. Instead of including gamepad-like curves that fit into hands, the Playdate buttresses its four corners with mild curves, and these roll across a palm quite comfortably.