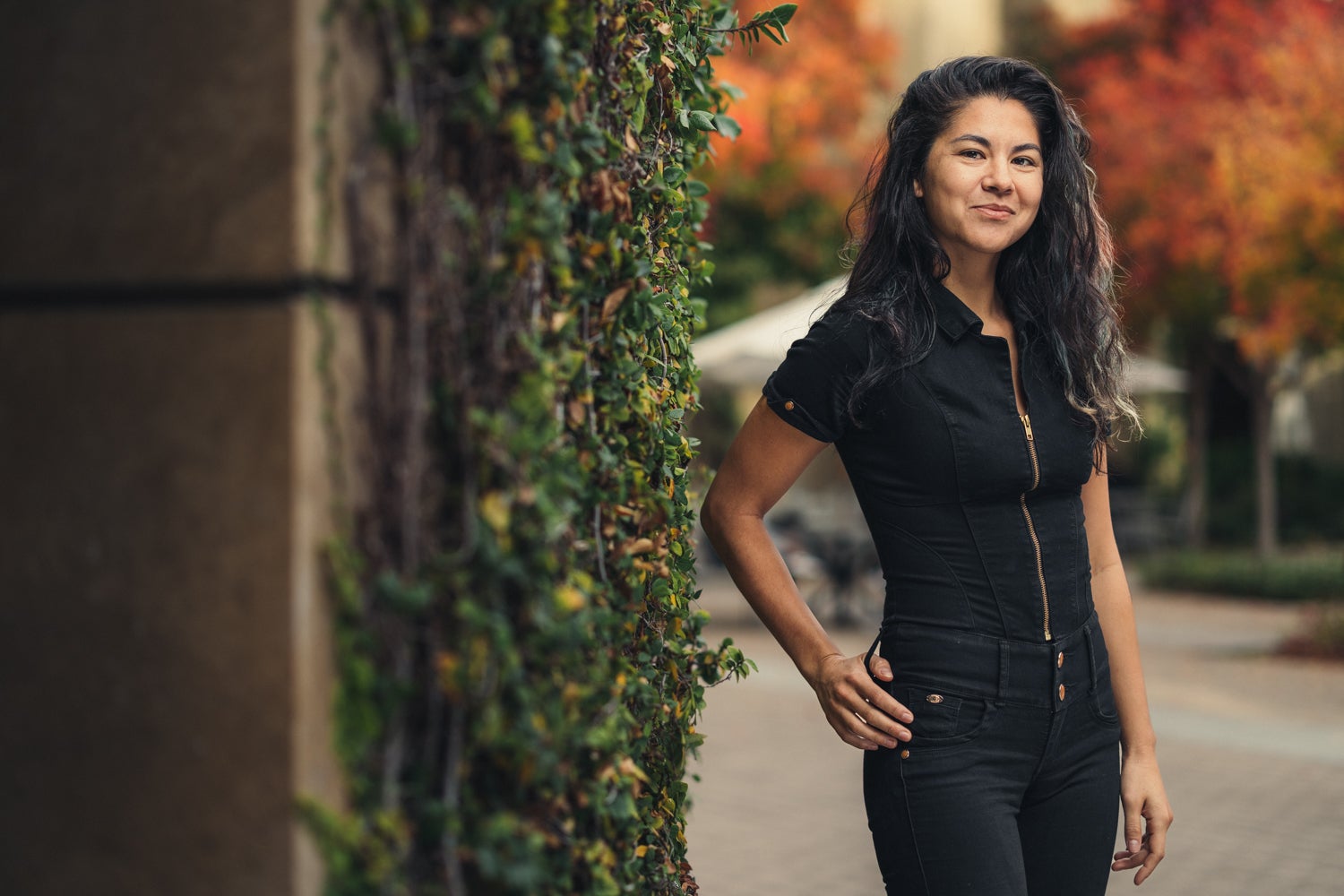 Growing up in the suburbs of Silicon Valley, Anna Mattinger felt like an aberration. She said she was a “problem kid” who was often restless, belligerent, and rebellious.

“In Cupertino, that made me stick out like a sore thumb because I was surrounded by a bunch of really good kids,” she said, adding that although she enjoyed learning and performed well academically, she didn’t like the structure of traditional school. “I felt very much in a bubble, and I really wanted to get out and see the world.”

After completing high school through concurrent enrollment at a community college, she continued to take classes but eventually burned out. “I didn’t really know why I was there, what I was doing, or what I was trying to prove,” she said. “And that’s when I left.”

At 19, Mattinger signed up for the Back Country Trails Program. For five months she lived and worked off-the-grid under grueling conditions in the wilderness of Kings Canyon National Park where she built hiking trails. She planned to use the time to clear her head before returning to school, but by the end of the program, she decided to change course.

“After that, I was like, ‘I think I want to keep going!’ ” she recalled. “And that turned into 10 years of globetrotting and doing a bunch of different things.”

Mattinger said that a whirlwind of experiences around the country and the world gave her greater perspective and purpose and made her better prepared for a formal college experience and the rigors of Stanford. “I’m really happy with the way I spent the early part of my adulthood,” she said. “I really needed the whole gap decade to get to where I am now.”

Mattinger’s travels have taken her to Europe, Africa, South America, Oceania, and Asia. In 2017, her interest in martial arts took her to rural northwestern China to train under a Shaolin monk. His school, located in a cornfield between the Siberian and North Korean borders, accepts about 10 students at a time. During each of the three visits, Mattinger underwent intense training for 40 hours a week. 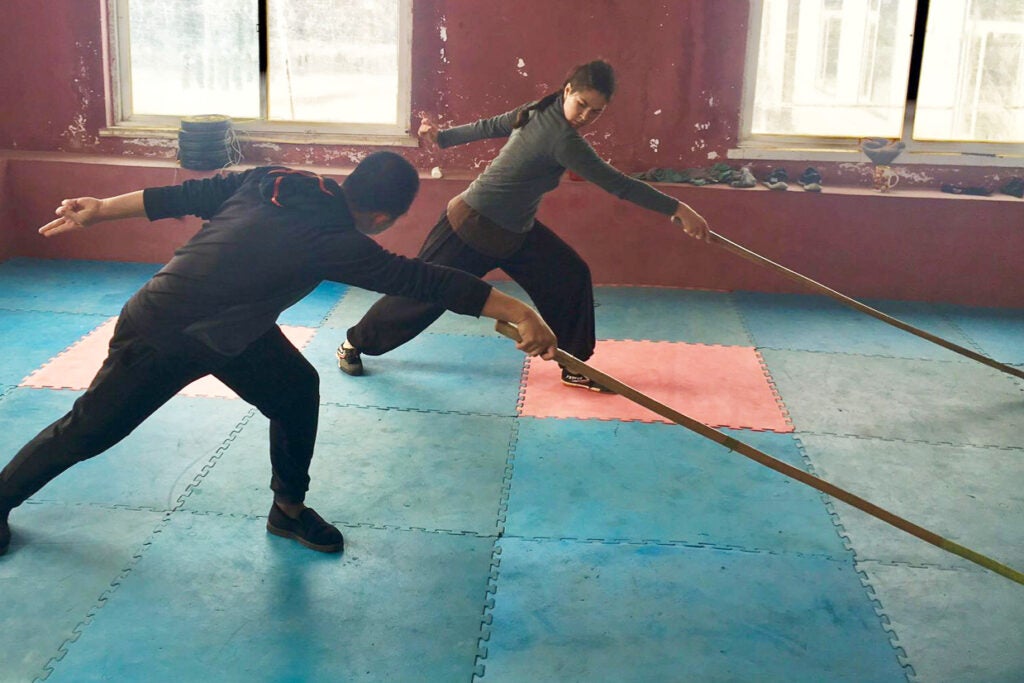 “I would go for a couple of months at a time and when I was finished, all of my joints were falling apart,” she said.

Her love of martial arts also took her to Thailand to learn Muay Thai. In 2018, she joined a gym and by the end of her first week, the head trainer and gym owner asked if she’d compete in a paid fight. Mattinger agreed and they ramped up her training.

“I lost that first fight, but I think I learned more from the loss than I would’ve from a win,” she said.

Mattinger said that one of her more memorable experiences was her four-month solo bike trip from Key West, Florida, to Bar Harbor, Maine, in 2015. She said the experience was one of the best things she’s ever done with her life because of the physical challenge, long stretches of solitude, and some harrowing moments, like getting lost and even getting hit by a car.

“Getting myself through those moments really enhanced my trust in myself and my sense of competence and stability,” she said.

Throughout her 20s, Mattinger worked various seasonal jobs to pay for her travels, including as a farm hand and a ski instructor at resorts in Lake Tahoe and Mammoth Mountain. She also worked as a freelance writer and model for small artists and designers. But it was her years working at Burning Man – the annual weeklong art event in Black Rock Desert, Nevada – where she learned to play with fire.

In 2012, Mattinger landed a gig as a golf cart mechanic at Burning Man. There, she also joined a team that built a full-scale replica of a Spanish galleon ship crashed into a pier. The event was an experience she has never forgotten, because of the artwork and the unique social dynamics. 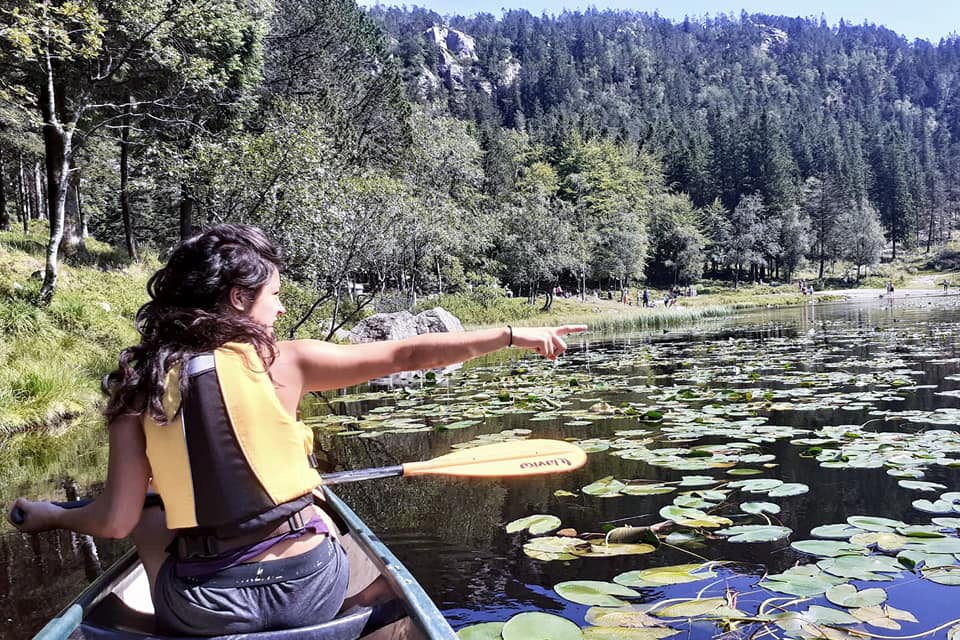 “Burning Man provides a weird alternate context,” she said. “Everyone is confronted with the bodily realities of being literally ‘out of our element’ in an alkaline lakebed, often in extreme dust and heat. A lot of societal pretense and niceties go away in that environment, and people are often compelled to try on different ways of presenting and being themselves.”

She returned to Burning Man in subsequent years to join teams constructing large art installations, which allowed her to learn carpentry and pyrotechnics. In 2013, she plumbed propane “poofers” that shot 30-foot fireballs from the top of The Control Tower, a six-story bamboo structure covered in interactive LED lights.

For the 2014 event, she spent six months helping build an installation called Embrace, a seven-story structure shaped like the torsos of two people hugging. “Inside were mechanical beating hearts and spiral staircases to the heads, where you could look out the eye sockets,” she said. “It was the tallest thing out there that year.”

Mattinger’s travels continued, including to Australia, New Zealand, and South Africa, where she attended regional “burns” inspired by Burning Man.

She noted that her gap decade was a contemplative experience that gave her time to consider various social, economic, environmental, and technological challenges.

“All industries, and the solving of most problems, are becoming increasingly entangled with computing and engineering. Computing, in particular, will increasingly have more power and reach when it comes to making things better—or worse—than anything else,” she said, adding that her intellectual curiosities reignited her interest in academics. “I’d been toying with the idea of eventually going back to school, and then the pandemic hit and my life was cancelled so I thought, ‘Well, there’s no better time than now!’”

In 2020, Mattinger returned to California and enrolled at De Anza College to take classes online – mostly STEM courses. It was also the first time she’d ever signed a lease.

“Being domestic did feel like a novelty, but I was surprised by how easily I adjusted,” she said. “It helped that I was really into what I was studying. It felt really fulfilling.”

She applied to several schools but said that participating in the Aeronautics and Astronautics Community Research Experience cemented her interest in Stanford. Since enrolling this fall, she’s also enjoyed the nostalgia of being on the Farm; she spent much of her childhood here while her father was a Stanford graduate student. Although she hasn’t declared a major, she intends to study computer science and artificial intelligence.

Mattinger said there’s still much more she’d like to experience, but she is glad to be a student again and eager to see what Stanford has to offer. “I’m happy that I waited to go back to school because now it feels right,” she said. “I have a purpose and I actually want to be here.”

When asked where she sees herself in ten years, she said she doesn’t believe in making long-term plans.

“If you’re living life correctly, then in two or five or ten years you will know more, have greater perspective, and will be able to make better decisions about what you do next,” she said. “Right now, I’m just excited to be here.”