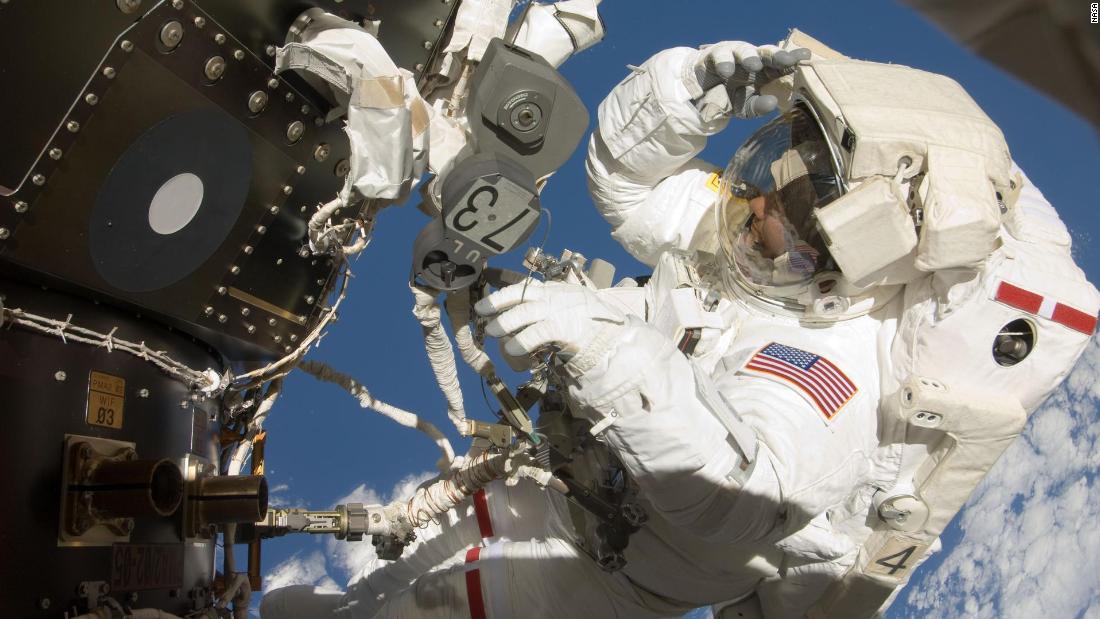 NASA postponed a spacewalk originally scheduled for Tuesday after receiving a space debris warning for the International Space Station.

Just hours before the astronauts were due to venture out of the ISS, the agency said on its Twitter account that “due to the lack of opportunity to properly assess the risk,” it had decided to delay the November 30 spacewalk until more information was available.
“After receiving additional information about a late notification debris event on Monday, NASA determined the orbit of the debris does not pose a risk to a scheduled spacewalk by Thomas Marshburn and Kayla Barron or to International Space Station operations,” the agency posted on its website. “Delaying the spacewalk provided an opportunity for NASA to evaluate the risk from the debris notification.”

Marshburn and Barron began their spacewalk at 6:15 a.m. ET, and it’s expected to last for about six and a half hours. The team will replace a malfunctioning communications antenna.

Live coverage of the spacewalk will stream on NASA TV and the agency’s website.

The astronauts will replace an S-band Antenna Subassembly by using a spare that is already attached outside of the space station. The S-band radio frequencies are used to transmit low-rate voice and data from the space station more than 220 miles (354 kilometers) to flight controllers on the ground, according to NASA.

“That timing allowed us to have Tom and Kayla go into our neutral buoyancy laboratory, or big pool where we practice spacewalks, and practice our exact spacewalk,” LaCourt said.

Overall, the loss of this antenna has a low impact on space station operations. However, maintaining antennas like this one allows for a redundancy in communications. Installing the spare, which has existed outside the station since 2010, will allow that system of backups to continue. The station has other low-rate S-band systems and high-rate KU-band systems that relay videos back and forth.

During the spacewalk, Marshburn will be on the end of the Canadarm2 robotic arm, which European Space Agency astronaut Matthias Maurer will control from inside the space station.

Marshburn, Barron and Maurer arrived on the space station along with NASA astronaut Raja Chari in a SpaceX Crew Dragon capsule on November 11.

Tuesday’s spacewalk is the 245th conducted to assemble, maintain and upgrade the space station, which has served as a continuous low-Earth orbit hub for humans for 21 years.

US Space Command said Russia tested a direct-ascent anti-satellite, or DA-ASAT missile, striking a Russian satellite and creating a debris field in low-Earth orbit of 1,700 pieces of trackable orbital debris that is also likely to generate hundreds of thousands of pieces of smaller orbital debris. It will take months to catalog all of the new debris created by the test.

NASA Administrator Bill Nelson said in a statement that he was “outraged by this irresponsible and destabilizing action. With its long and storied history in human spaceflight, it is unthinkable that Russia would endanger not only the American and international partner astronauts on the ISS, but also their own cosmonauts. Their actions are reckless and dangerous, threatening as well the Chinese space station.”

While the debris field was very concentrated at first, it has dispersed over time, said Dana Weigel, NASA deputy manager of the International Space Station Program, on Monday. The team planning the spacewalk ran models and predictions to understand the environment the astronauts will be in during their spacewalk.

It has raised the risk to the spacewalkers by 7%, which “is not a large increase and that’s well within what we see with normal atmospheric fluctuations and the normal amount of debris that kind of moves through,” Weigel said. “What it really tells us is EVA (extravehicular activity) has always been risky.”

“It does mean penetration but it doesn’t mean it’s a catastrophic penetration,” Weigel said. “There’s a certain size of penetration that is supportable. There’s an emergency oxygen package on the suit that would feed it for a while. When we talk about EVA risk, it’s generally around 1 in 2,700, so that’s considered the risk of having some size of a penetration over the course over the duration of the six and a half hour EVA.”

Space junk is a massive problem. Russia’s anti-satellite missile test just made it worse, though Weigel said that some previous spacewalks have come with a higher risk than this one.

“Unfortunately, when you have a debris event like this and you get a lot of really small pieces scattered around, it just becomes part of the average environment,” Weigel said. “At some point, there is not a specific directional aspect to the debris. So there’s nothing different that they will do out on the spacewalk.”

The event did shuffle the task list for the spacewalk itself and some “get-ahead” tasks have been removed, including cable routing and releasing bolts on a spare nitrogen tank, LaCourt said. However, if there is time, the astronauts will tend to a few things that could reduce the need for future spacewalks.

Overall, the team said they have been conservative with their decisions because some of these were made a couple of weeks ago, ahead of having all of the assessment data from the new debris. Amid the elevated risk and increased uncertainty due to the new debris, “we didn’t want to leave the crew out longer for items that we didn’t consider critical,” Weigel said.