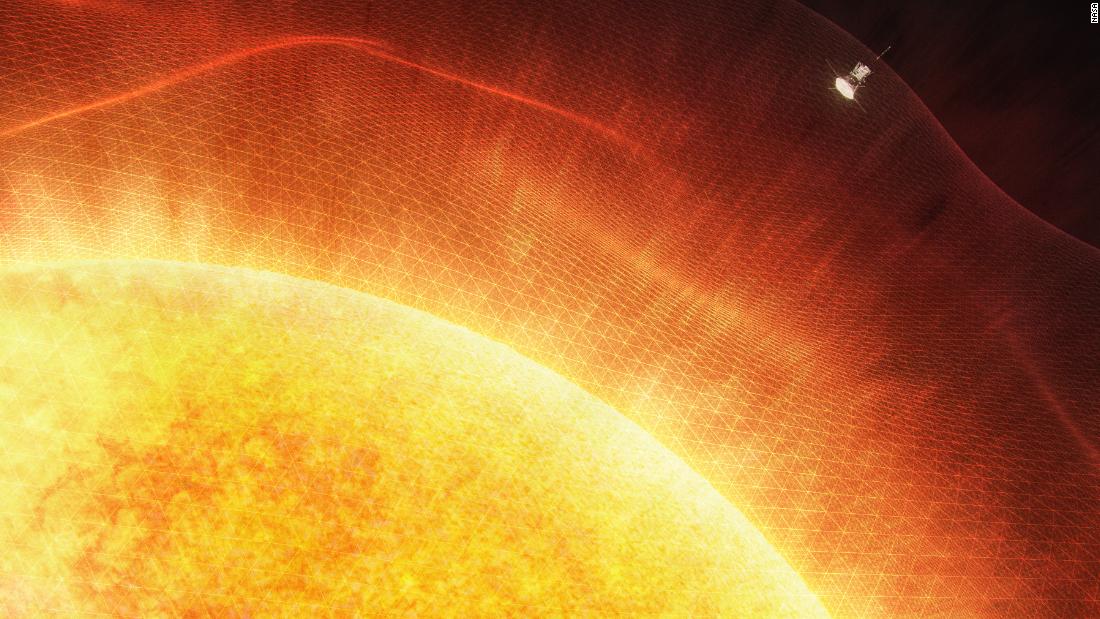 “Parker Solar Probe ‘touching the Sun’ is a monumental moment for solar science and a truly remarkable feat,” said Thomas Zurbuchen, the associate administrator for NASA’s Science Mission Directorate, in a statement.

“Not only does this milestone provide us with deeper insights into our Sun’s evolution and (its) impacts on our solar system, but everything we learn about our own star also teaches us more about stars in the rest of the universe.”

The Parker Solar Probe launched in 2018 and set out to circle closer and closer to the sun. Scientists, including the spacecraft’s namesake astrophysicist Eugene Parker, want to answer fundamental questions about the solar wind that streams out from the sun, flinging energetic particles across the solar system.

The spacecraft has already revealed surprising finds about the sun, including the 2019 discovery of magnetic zig-zag structures in the solar wind called switchbacks.

Now, thanks to Parker’s latest close approach to the sun, the spacecraft helped scientists determine that these switchbacks originate from the solar surface.

Before Parker Solar Probe’s mission is done, it will have made 21 close approaches to the sun over the course of seven years. The probe will orbit within 3.9 million miles of the sun’s surface in 2024, closer to the star than Mercury — the closest planet to the sun.

Although that sounds far, researchers equate this to the probe sitting on the four-yard line of a football field and the sun being the end zone.

When closest to the sun, the 4½-inch-thick carbon-composite solar shields will have to withstand temperatures close to 2,500 degrees Fahrenheit. However, the inside of the spacecraft and its instruments will remain at a comfortable room temperature.

“Flying so close to the Sun, Parker Solar Probe now senses conditions in the magnetically dominated layer of the solar atmosphere — the corona — that we never could before,” said Nour Raouafi, Parker project scientist at the Johns Hopkins Applied Physics Laboratory in Laurel, Maryland, in a statement.

“We see evidence of being in the corona in magnetic field data, solar wind data, and visually in images. We can actually see the spacecraft flying through coronal structures that can be observed during a total solar eclipse.”

Getting up close with a star

In April, the Parker team realized their spacecraft had crossed the boundary and entered the solar atmosphere for the first time.

It occurred when the spacecraft made its eighth flyby of the sun and registered magnetic and particle conditions specific to a boundary where the sun’s massive solar atmosphere ends and the solar wind begins — 8.1 million miles above the surface of the sun.

“We were fully expecting that, sooner or later, we would encounter the corona for at least a short duration of time,” said Justin Kasper, lead study author, University of Michigan professor and deputy chief technology officer at BWX Technologies, Inc. in a statement. “It is very exciting that we’ve already reached it.”

Parker wove in and out of the corona several times over the course of a few hours during the April flyby, which helped researchers understand that the boundary, called the Alfvén critical surface, isn’t a smooth circle around the sun. Instead, it has has spikes and valleys. Understanding the presence of these features could allow scientists to match them with solar activity from the sun’s surface.

During the flyby, Parker made another intriguing encounter as it passed 6.5 million miles from the sun’s surface. It passed through a feature called a pseudostreamer, a large structure rising above the surface of the sun that has been observed from Earth during solar eclipses.

When the spacecraft flew through the pseudostreamer, things were quiet, just like in the eye of a storm. Typically, Parker is bombarded with particles as it flies through the solar wind. In this case, particles moved slower and the zig-zagging switchbacks decreased.

The spacecraft will likely fly through the corona again in January during its next flyby.

“I’m excited to see what Parker finds as it repeatedly passes through the corona in the years to come,” said Nicola Fox, division director for NASA’s Heliophysics Division, in a statement. “The opportunity for new discoveries is boundless.”

Parker is likely to be in the right place at the right time during future flybys as the sun’s 11-year cycle heats up with activity over the next few years. Every 11 years, the sun completes a solar cycle of calm and stormy activity and begins a new one.

It’s important to understand the solar cycle because space weather caused by the sun — eruptions like solar flares and coronal mass ejection events — can impact the power grid, satellites, GPS, airlines, rockets and astronauts in space.

The newest solar cycle, which began in December 2019, has been predicted to peak in July 2025, which means an increase in solar activity.

This means that the outer edge of the sun’s corona will expand and Parker will likely get to spend more time flying through the sun’s mysterious outer atmosphere.

“It is a really important region to get into because we think all sorts of physics potentially turn on,” Kasper said. “And now we’re getting into that region and hopefully going to start seeing some of these physics and behaviors.”