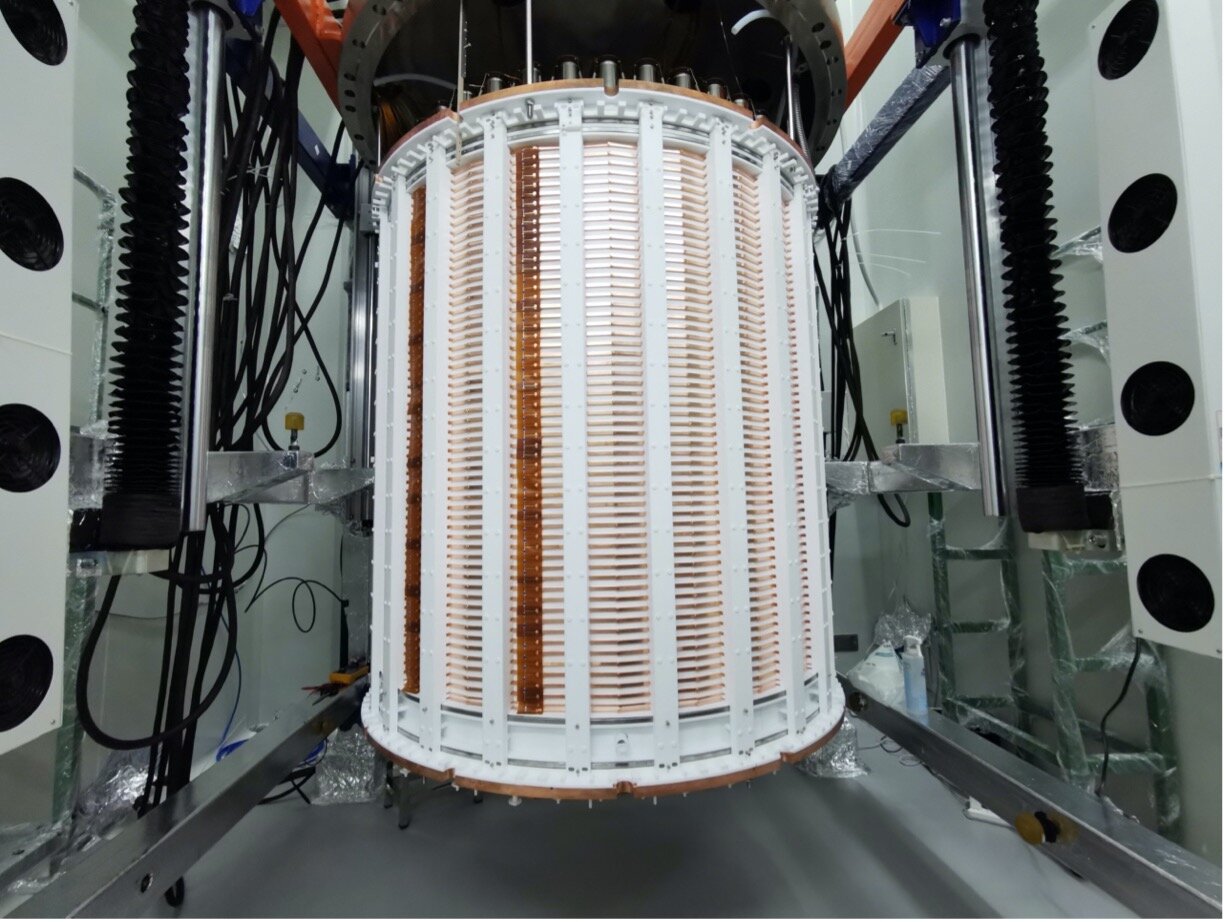 Teams of astrophysicists worldwide are trying to observe different possible types of dark matter (DM), hypothetical matter in the universe that does not emit, absorb or reflect light and would thus be very difficult to detect. Fermionic DM, however, which would be made of fermions, has so far been primarily explored theoretically.

The PandaX Collaboration, a large consortium of researchers in China involved in the PandaX-4T experiment, has recently carried out a study aimed at extending the sensitive mass window for experiments aimed at directly detecting fermionic DM from above GeV to MeV or even keV ranges.

The team recently published two papers in Physical Review Letters outlining the results of the two searches for the absorption of fermionic DM using data gathered as part of the Panda X-4T experiment, a large-scale research effort aimed at detecting DM using a dual-phase time projection chamber (TPC) in China.

“With a massive DM converted to a massless neutrino, the DM mass is absorbed and converted to the kinetic energy of the neutrino and most importantly the recoiled electron or nuclear targets,” Prof. Shao-Feng Ge, one of the researchers who carried out the study, told Phys.org.

“With efficient mass conversion to energy, according to the Einstein relation E = mc2, even keV (MeV) DM can deposit a large enough recoil energy in the recoil electron (nuclei).”

The idea of observing light fermionic DM by detecting the recoil energy resulting from the absorption of its mass first emerged a few years ago and has since been explored by different groups of theoretical physicists. While these studies offered valuable theoretical predictions, these predictions had so far never been tested experimentally.

Theoretical studies predict that in nuclear absorption reactions, the mass of DM is converted into kinetic energy that charges the outgoing neutrino and nucleus. This energy, known as “nuclear recoil energy,” should be approximately proportional to the square of the DM mass, resulting in a unique mono-energetic spectrum. In their first study, the PandaX-4T collaboration tried to detect the energy resulting from the absorption of fermionic DM by nuclei.

“This mono-energetic spectrum is dramatically different from the traditional elastic scattering spectrum and has not been searched dedicatedly before in the DM direct detection experiment,” Dr. Yi Tao, another researcher involved in the study, told Phys.org. “As part of this PandaX-4T search, we performed dedicated studies on the nuclear recoil energy reconstruction and then compared simulation and neutron calibration data.”

The researchers found that there was a good consistency between the data collected by their dual-phase time projection chamber (TPC) and their detector response theoretical model. More specifically, the signal region they scanned corresponded to nuclear recoil energy up to 100 keV, which covers the DM mass parameter from 30 MeV/c2 to 125 MeV/c2.

Theoretically, fermionic DM should thus induce electronic recoiling signals in liquid xenon detectors that could be experimentally detected. In their second study, the PandaX-4T collaboration searched for this other potential trace of fermionic DM.

Electrons are much lighter than nuclei and thus easier to be ejected during absorption processes. Therefore, electronic absorption searches can be sensitive to the sub-MeV mass range.

“In addition, unlike nuclear recoiling signals where quite a bit of energy is quenched into heat and cannot be detected in a liquid xenon detector, most of the electronic recoiling energy is detectable,” Dr. Dan Zhang, another researcher who carried out the study, told Phys.org.

“For more detailed theoretical models, different hypothetical six-dimensional operators in the four-fermion process (fermionic DM + electron -> electron + neutrino) have been studied with an effective field theory approach. It turns out electronic absorption signals will be similar regardless of operators in the direct detection experiments, but the interpretations on the couplings are quite different, and the comparison with other cosmological and astrophysical observations are also different.”

The search for sub-MeV fermionic DM absorbed by electrons carried out by Dr. Zhang and the rest of the PandaX-4T collaboration did not lead to the detection of any significant signals over the expected background. Nonetheless, the team was able to set the strongest limits on the axial-vector and vector interactions for DMs with a mass of several tens keV/c2, which surpass the existing astronomy and cosmology constraints for such light fermion DMs.

“About two years ago, XENON1T reported a low-energy excess, which could be interpreted as an electronic absorption of 60 keV/c2 fermionic DM according to phenomenological studies,” Dr. Zhang said. “This possibility is now challenged by our data.”

The recent searches performed by the PandaX-4T collaboration highlight the potential of nuclear absorption and electronic absorption processes as channels to search for light mass DM. In the future, they could inspire other astrophysics collaborations worldwide to perform similar searches.

“Once any excess is observed, the energy of the excess would indicate the mass of DM,” Prof. Ning Zhou, another researcher involved in the study, told Phys.org. “For this channel, we obtained model-independent constraints on the sub-GeV DM-nucleon scattering cross section and probe down to the 10^-50 cm2 region for 35 MeV/c2 DM mass, for the first time. In addition, we study a UV-complete model with Z’ mediator, which brings together the cosmology constraint, the collider constraint, and our limit from direct detection.”

So far, the Panda X-4T collaboration successfully set new limits for experiments aimed at directly detecting fermionic DM. As their experiment is ongoing and is thus still collecting data, the team will soon be conducting additional searches for elusive, light DM.

“The data we reported is equivalent to exposing a 600-kg liquid xenon target for one year to the illumination of this hypothetical DM,” Prof. Jianglai Liu, Spokesperson for the PandaX Collaboration, told Phys.org. “When PandaX-4T concludes in 2025, we anticipate a cumulative exposure of 10 times greater. We also expect to obtain a more precise understanding of our detector to the nuclear recoil and electronic recoil signals via thorough calibrations and we are excited to see how the story unfolds in the future.”

This document is subject to copyright. Apart from any fair dealing for the purpose of private study or research, no
part may be reproduced without the written permission. The content is provided for information purposes only.