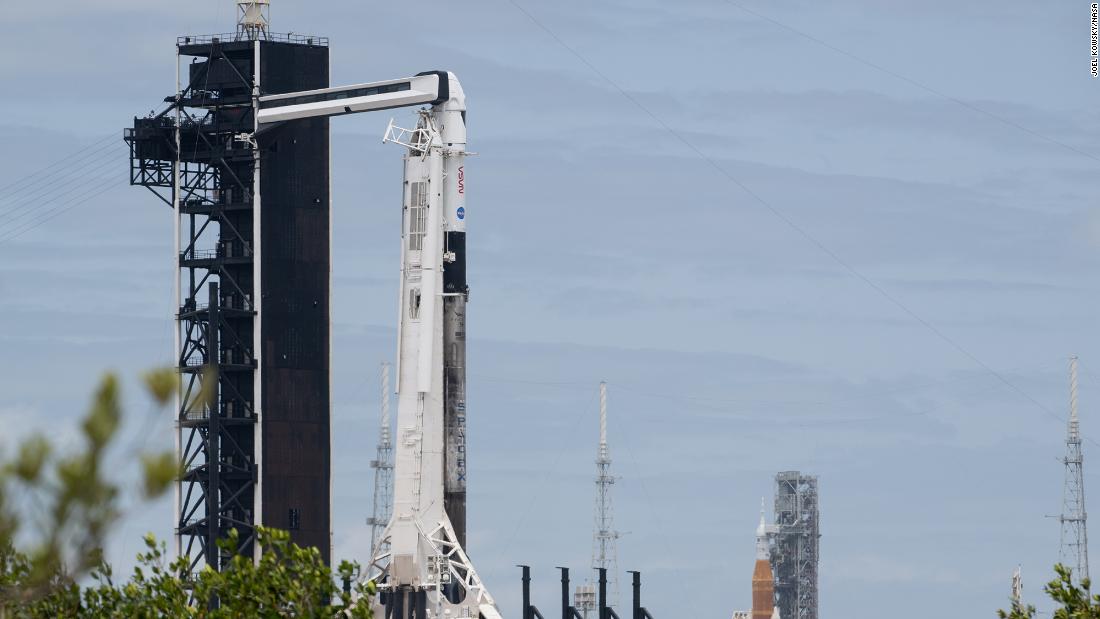 The astronauts had spent 16 hours orbiting aboard their SpaceX Crew Dragon spacecraft after a pre-sunrise launch from Kennedy Space Center in Florida at 3:52 am ET. The capsule, which is fully autonomous, circled the Earth more than ten times, maneuvering closer to the ISS before making a gentle, precise contact with one of the space station’s docking ports at 7:37 pm ET. The spacecraft’s hatch, which provides a safe airlock between the capsule and the space station, was opened about 90 minutes later, allowing the astronauts to leave the spacecraft and enter the ISS for the first time.

This mission, called Crew-4, marks a return to the crewed launches that SpaceX conducts in partnership with NASA after the company concluded the first all-private mission to the space station for wealthy paying customers on Monday.

On board are NASA astronauts Kjell Lindgren, Robert Hines, and Jessica Watkins, and Italian astronaut Samantha Cristoforetti, who is flying on behalf of the European Space Agency.

Here’s everything you need to know about Crew-4.

What makes this flight historic?

Jessica Watkins is the first Black woman to join the space station crew for an extended stay.

Though more than a dozen Black Americans — including four Black women — have traveled to space since Guion Bluford became the first to do so in 1983, no Black woman has had the opportunity to live and work in space for an extended period, as the ISS has enabled more than 200 astronauts to do since 2000.

“This is certainly an important milestone I think both for our [space] agency and for the country,” Watkins said during a press conference last month. “I think it really is just a tribute to the legacy of the black women astronauts that have come before me as well as to the exciting future ahead.”

She has a long history with NASA, having begun her career there as an intern, and she previously held roles at NASA’s Ames Research Center in Mountain View, California, and at the Jet Propulsion Laboratory in Pasadena, California, where she worked with the Curiosity Mars rover. A trained geologist, she’s studied the surface of the red planet.
Watkins’ crew mates refer to her by the nickname “Watty.”

Who else is on this mission?

This mission’s crew is one of the first to include just as many women as men.

Cristoforetti, who was on one previous mission to the ISS in 2014-2015, is the sole woman in ESA’s astronaut corps. But Cristoforetti told reporters last month that the situation was “bound to end very soon.”

“We definitely expect to to have some some great female [ESA] colleagues by the end of the year,” she added.

Hines is a 22-year veteran of the US Air Force, and this marks his first time to travel to space since he was selected for the NASA astronaut corps in 2017.

Lindgren, the commander for this mission, is certified in emergency medicine, and prior to being selected to take to the skies himself, he used to work as a flight surgeon on the ground at NASA’s Johnson Space Center, supporting other astronaut missions. Lindgren was born in Taiwan and spent much of his childhood in England before moving to the United States and attending the US Air Force Academy.

This group of four astronauts has spent months training together, and they even took some time to do some extracurricular bonding. Watkins noted they went on a kayaking trip in Eastern Washington “just to get to spend some time getting to know each other and understanding how we all function…and what makes each of us tick, and I think that’s going to be really crucial.”

“We get along great. It is just such a joy to have these folks on this team,” Lindgren added.

How did they get to space?

The crew traveled aboard a SpaceX Crew Dragon capsule, which, since entering service in 2020, has now launched seven crewed missions.

Though SpaceX designed the Crew Dragon to be reusable and three capsules are already in service, Crew-4 is flying aboard a brand new spacecraft, which they named “Freedom.”

The Crew Dragon was developed by SpaceX under a $2.6 billion contract with NASA as part of the “Commercial Crew Program.” The idea behind the program was to move NASA into a customer role — allowing private companies to design, build and test a new spacecraft to serve NASA astronauts while still giving the company ownership over the vehicle.

Since SpaceX controls the vehicle, it has the ability to sell seats to whomever it wishes, hence the all-private mission that the company just concluded and one previous space tourism mission that took off in September last year.

At NASA, the program has been deemed a success, and the space agency is adopting the same contracting method for several vehicles involved in its efforts to explore the moon.

What will they do in space?

Now that they’ve arrived on the ISS, the crew will get caught up with the seven astronauts already aboard the ISS — including three NASA astronauts and an ESA astronaut that were part of SpaceX’s Crew-3 mission, and three Russian cosmonauts.

There’ll be about a five-day handover period, during which the Crew-3 astronauts will help the Crew-4 astronauts settle in, before Crew-3 returns home aboard their own SpaceX Crew Dragon capsule.

Then the Crew-4 astronauts will set to work on all the science experiments and space station maintenance duties they have on their to-do list.

“Experiments will include studies on the aging of immune systems, organic material concrete alternatives, and cardiorespiratory effects during and after long-duration exposure to microgravity,” according to NASA. “These are just some of the more than 200 science experiments and technology demonstrations that will take place during their mission.”

Crew-4 is slated to return from space in September, shortly after SpaceX launches its Crew-5 mission.