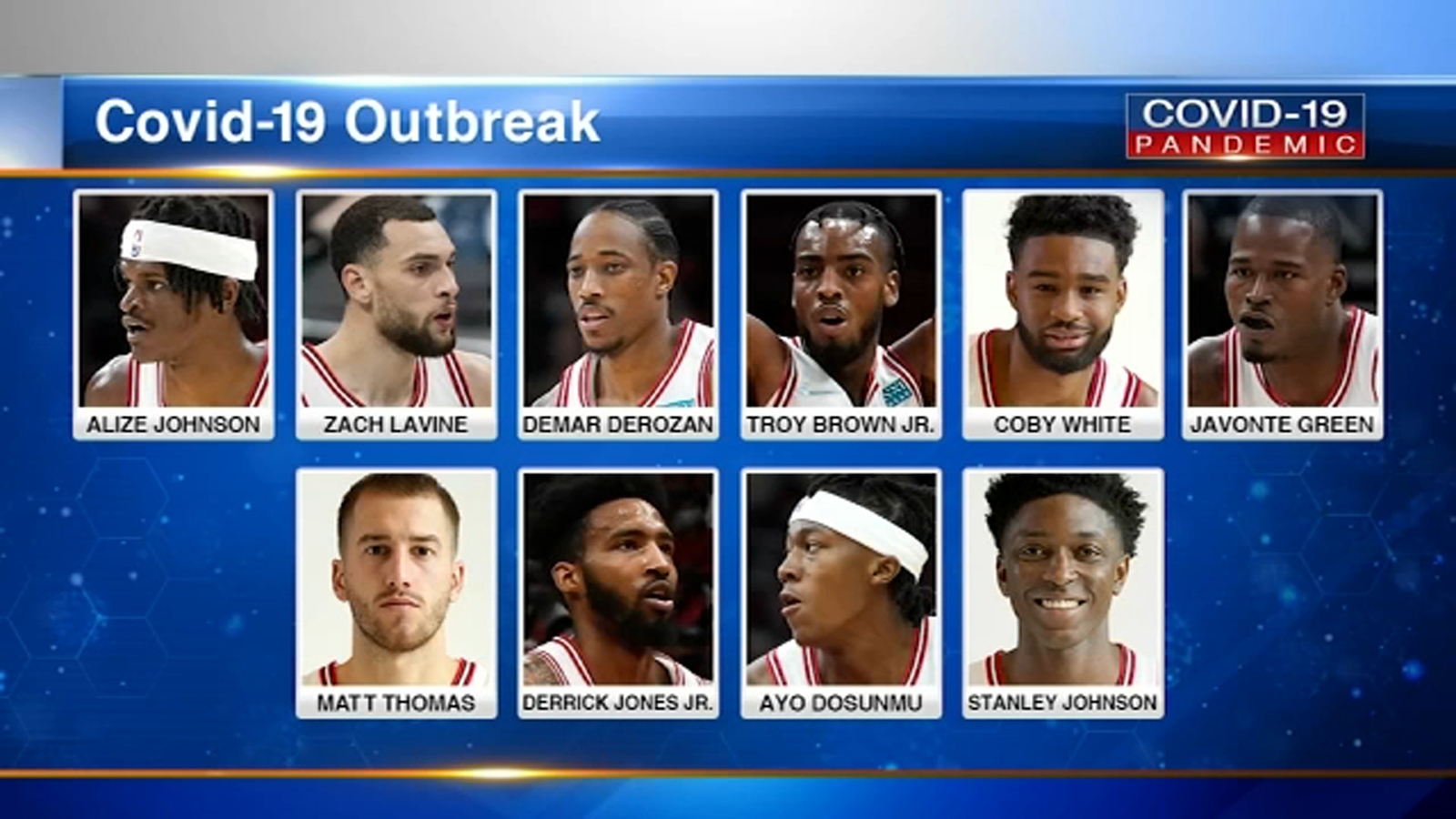 CHICAGO — Two Chicago sports teams have had to postpone upcoming games due to positive COVID tests, both on the home team and on the opponent’s.

The NBA has postponed the next three Chicago Bulls games amid a COVID-19 outbreak on the team, the Bulls said Tuesday.

But Sunday’s game against the Los Angeles Lakers was only pushed back to 7 p.m. from 2:30 p.m.

Their additions, announced by the team, bring the Bulls’ total to 10 players in the league’s COVID-19 protocols since the start of the month.

The Bulls were off Sunday and were set to host the Detroit Pistons on Tuesday night.

The Bulls are off to a great start this season with a 17-10 record good for third place in the Eastern Conference, despite playing the last couple games with several players sitting out because of COVID. On Saturday, the Miami Heat blew them out by 26 points.
“If you’re looking for an optimistic take on it, the Bulls can get it out of the way now and be healthier when it matters in the spring I guess,” said ESPN 1000’s Carmen DeFalco.

The Bulls say the players and coaches are all fully vaccinated and most have had the booster as well. But that has not kept 10 players from joining the current list of those who are on the COVID-protocol list, though the team says none are having serious symptoms.

“I understand what the league is doing, but we have guys that feel fine,” Bulls Coach Billy Donovan said.

The Bulls say despite their vaccination status, players and coaches are tested frequently. Doctors say that is further evidence that the vaccines cannot completely prevent breakthrough cases, though they generally help prevent serious symptoms.

“The good news is the level of illness is low,” said Dr. Brian Cole, Midwest Orthopedics at Rush. “Some may be asymptomatic and would otherwise not know it other than a sensitive test.”

While the Bulls still technically have enough players on the roster not on COVID protocols, the league still chose to postpone their games this week at home against Detroit on Tuesday and Thursday in Toronto.

“It only makes sense, the only logical choice here, because it’s really sweeping through the team right now,” DeFalco said.

The NBA mandates a minimum of eight players for each team before postponing a game during team outbreaks, and Chicago currently has eight players available on its roster, including its two two-way players and Alfonzo McKinnie, who signed a 10-day contract Friday.

McKinnie was signed after the Bulls were granted extra roster spots due to the league’s hardship exception and the Bulls are eligible to continue adding players by that provision. However, the team’s outbreak has been so widespread that even one of the players they signed as a hardship exception, Johnson, has already landed in the health and safety protocols.

Both White and Green have completed their mandatory 10-day isolation after a positive test last week. White returned to the team’s facility Sunday for the first time since testing positive for COVID-19 on Dec. 1, sources told ESPN’s Adrian Wojnarowski.

The NBA says 97% of its players are vaccinated, and sources told Wojnarowski more than 60% of players have received the booster.

The Blackhawks also postponed their game against the Calgary Flames Monday night after the Flames reported six players and a staff member entered the COVID protocol.

Tickets will automatically be valid for whenever the game is rescheduled.

ABC7 Chicago contributed to this report.