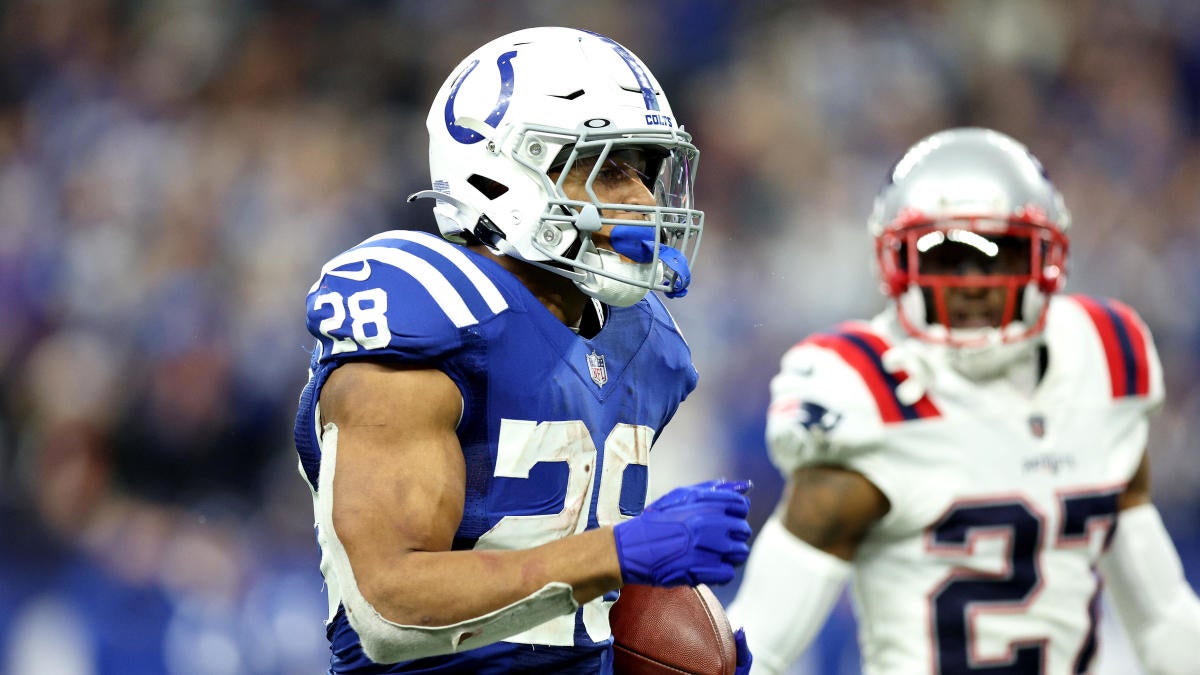 The Indianapolis Colts had a firm grip of Saturday’s matchup against the Patriots for the first three quarters. Over that stretch, they were able to shut out Bill Belichick’s club while they proceeded to put 20 unanswered points on the board. In the fourth quarter, however, New England began to show sparks of life as they went on a 17-0 run to bring them within a field goal just before the two-minute warning. But just as the tides appeared to be turning in favor of the Patriots, Colts running back Jonathan Taylor decided to slam the door shut.

On a second-and-8 attempt with just over two minutes remaining in the game, Taylor broke off a 67-yard touchdown run that broke the game wide open for Indianapolis, giving them the 27-17 win in this Week 15 matchup that snapped New England’s seven-game winning streak.

It was an uncharacteristic night for the Patriots, who were plagued with special teams issues — including a blocked punt that was returned for a touchdown — and inconsistent play both offensively and defensively. Indy was able to capitalize on those mistakes and jump out to that early lead, which helped cushion the Patriots’ late comeback attempt.

Carson Wentz wasn’t asked to do much heavy-lifting in the passing game as he completed just five of his 12 throws on the night for 57 yards, a touchdown and an interception. Arguably his biggest plays on the night game courtesy on his legs by converting a number of first downs in critical spots. Taylor finished with 170 yards on the ground, which included that clinching score. Meanwhile, Mac Jones completed 26 of 45 for 299 yards, two touchdowns — both to Hunter Henry — and two picks.

For more on how this game unfolded, check out our takeaways below.

Why the Colts won

Over the first three quarters, Indianapolis largely was able to take advantage of New England’s mistakes and were able to exploit a couple of key matchups. The biggest was the Patriots’ weakness in defending the run. That was on full display on the club’s second offensive possession of the night where they traveled 78 yards almost exclusively on the ground. That culminated in the game’s first touchdown when Wentz completed a shuffle pass to Nyheim Hines following a direct snap to Taylor. Through the first half, 122 of Indy’s 160 total yards of offense came via the running game.

As Indy hammered that advantage, it was also able to capitalize on general poor play by the Patriots. The Colts were able to block a punt after New England seemed to let a Colts defender run through the line unscathed and put a hand on the football. That was almost immediately recovered by the Colts in the end zone to create the two-score lead.

Even as the Patriots mounted their comeback attempt in the second half, they were able to make clutch plays at the right moment. The Taylor touchdown run in the fourth quarter is an obvious example, but holding New England to a field goal after they got the football down to the Indianapolis 2-yard line proved to be a big swing in the game. Had the Patriots found the end zone during that drive, they would have trailed by just six and that second score by Hunter Henry later in the fourth would have given them the lead.

While Wentz had a quiet night through the air, he was extremely clutch with his legs. All three of Indianapolis’ fourth-down conversions were via a Wentz sneak, which either resulted in points being put on the board or simply killed clock in what proved to be a tightly contested game late.

Why the Patriots lost

The Patriots were the anti-Patriots for the first three quarters of this game. There were a number of uncharacteristic plays by Bill Belichick’s team, which contributed to the Patriots falling behind early.

To begin the day offensively, they did move the ball well for a moment. Once they entered Indianapolis territory on the opening possession, however, they collapsed: Kendrick Bourne was held to a 1-yard rush on an end-around, a Shaq Mason penalty negated a 14-yard pass, and Jones was later sacked for a 15-yard loss, which forced the Patriots into a fourth-and-30 situation.

On the night, New England committed eight penalties for 50 yards and one directly contributed to points being put on the board. On Indy’s first possession of the second half, kicker Michael Badgley initially missed a 46-yard field goal. However, Patriots special teamer Brandon King went offsides, which gave Badgley not only another shot at the attempt, but pushed him 5 yards closer. He ultimately made the field goal on the second try and extended the Colts’ lead to 20.

It was those kinds of mistakes that plagued the team throughout the first three quarters. They were also shut out in the first half for the first time since Oct. 2, 2016 against the Bills — more commonly remembered as the game where Jacoby Brissett started for the Patriots in place of the injured Jimmy Garoppolo and suspended Tom Brady.

Coming into Week 15, the Patriots ranked 26th in the league in touchdown percentage in the red zone. That issue did rear its head in this game as well as Jones was picked off at the Colts’ 6-yard line with under two minutes to play in the opening half. The Patriots were also forced to settle for a field goal late in the game after getting the ball all the way down to Indy’s 2-yard line.

Of course, stopping the run was a huge concern coming into this game as that had been one of the few weak points of the defense. Those fears were realized throughout the game as Indy rushed for 226 yards as a team on 5.8 yards per carry.

While Taylor’s touchdown was the back-breaking moment in the game (and we’ll touch on it below), the sneaky big moment for the Colts pulling out this win was holding the Patriots to a field goal at the 8:57 mark of the fourth quarter. Instead of going for it on fourth-and-goal on the Indianapolis 7-yard line, Belichick elected to kick the field goal to bring his team within 10 points. That was a risky decision as it would then require New England needing two more possessions to either tie the game or take the lead. Had Belichick elected to go for it and the Patriots found the end zone on that fourth-down try, they would have only needed one possession to get a touchdown and take the lead.

Play of the game

Taylor’s 67-yard run will likely place him deeper into MVP conversations as that run was exactly the type of dagger that the Colts needed to pull away with this win. At the time, Indy was clinging to a three-point lead and was trying to keep the drive alive to kill clock. Instead of simply moving the chains, Taylor extended the Colts’ lead, which effectively eliminated any comeback chances for the Patriots.

This was Taylor’s 11th straight game with a touchdown, which is the longest-active streak in the NFL since LaDainian Tomlinson’s 12-game streak in 2004. That was also Taylor’s 31st touchdown of his career. Hall of Famer Edgerrin James, also a Colts star, is the only player in NFL history with more touchdowns (35) prior to turning 23 (Taylor turns 23 in January).

From here, the Patriots will head back to Foxborough and await a pivotal matchup with the Buffalo Bills at Gillette Stadium. Meanwhile, the Colts will go on the road to face the Cardinals in Arizona on Christmas.