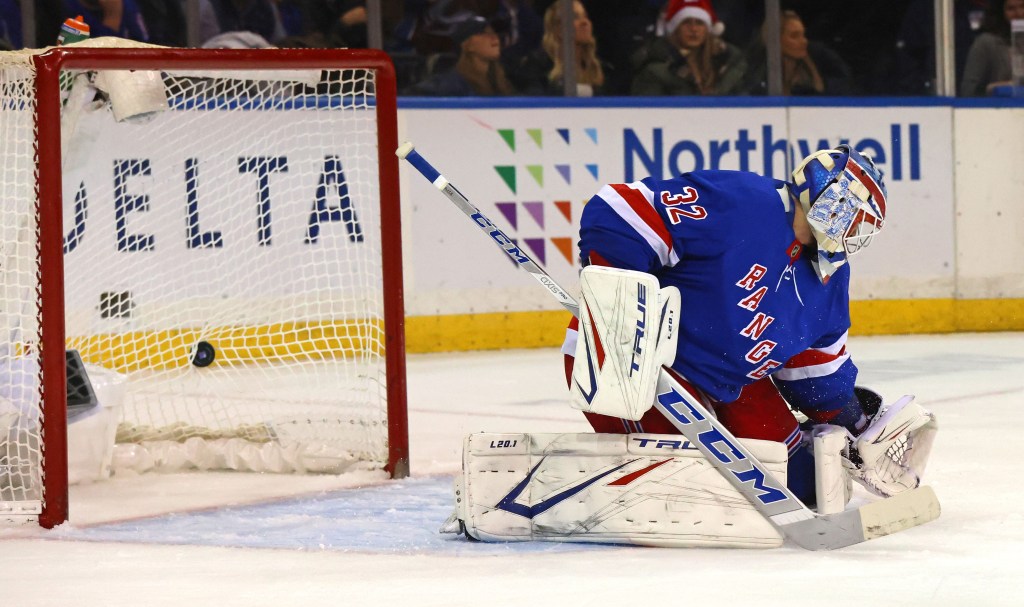 The Rangers, riding high off their surging start to the season, quickly found out just where they measure up to one of the NHL’s most complete teams.

Spoiler: The Blueshirts were looking straight up.

In the second game of their back-to-back and with a fourth-string goaltender making his NHL debut, the Blueshirts gave up five goals in the middle frame on the way to a jarring 7-3 loss to the Avalanche on Wednesday night at Madison Square Garden.

The loss not only snapped the Rangers’ seven-game win streak, but it served as a reminder of what kind of teams lay ahead in this 82-game schedule.

Entering Wednesday’s matchup with the highest goals-per-game average (4.14) and tied for the third-most goals (91) in the NHL, Colorado has now scored 68 goals in 13 games. Plus, the Avs have netted five or more in four of their last six games.

“We knew it was going to be a good test for us coming into it,” said Barclay Goodrow. “I mean, the one good thing is, with so many games coming up, we can put it in the rearview mirror pretty quickly and we see them again next week.”

While the Rangers have one of the best records in the NHL at 17-5-3, a majority of their schedule has come against lower-to-middle-tier teams. Aside from an overtime win over the Maple Leafs four games into the season, a tight victory over the Panthers and a competitive win over the Bruins, the Rangers have fallen short against the upper-echelon clubs they’ve faced.

Post Sports+ members, sign up to have Mollie Walker text you the latest word on the Rangers and reply with your thoughts and questions. Not a Sports+ member yet? Try it now.

Avalanche winger Mikko Rantanen buried the first and final goals of the game, while Logan O’Connor scored two goals in the span of 22 seconds in the second period for the 6-2 lead. Colorado center Nazem Kadri also registered a three-point effort with two assists and the go-ahead tally at 6:11 of the middle frame.

“They’re a talented team, and if you’re going to give them second and third chances and odd-man rushes, they’re going to take advantage,” said head coach Gerard Gallant, who added that he felt the Rangers made more mental mistakes than anything.

While Gallant said he didn’t want to make excuses, he said he thought the Rangers looked like a tired team.

That observation rang true by the end of the first period, in which the Rangers had managed to build a 2-1 lead. After Rantenen welcomed Rangers goalie Adam Huska to the NHL with a wrist shot that went off the rookie netminder’s blocker and in at 4:11 of the first, Jacob Trouba netted the equalizer from the top of the zone — which has seemingly become the defenseman’s sweet spot. On the Rangers power play later in the period, Nils Lundkvist recorded his first NHL goal.

Midway through the second period Trouba leveled Nathan MacKinnon, who was skating through the slot with his head down, echoing his crushing hit on Chicago’s Jujhar Khaira the night before that sent Khaira to the hospital. Immediately after, Trouba dropped the gloves with Gabriel Landeskog, who was given an instigator penalty for his trouble.

The odds were stacked against the Rangers in this one, but it doesn’t make a severely lopsided loss against a top team look any better.

“We’ve been on a good roll lately, played really good hockey and you run into this sometimes,” Gallant said. “We’ll bury it and go on to the next one.”