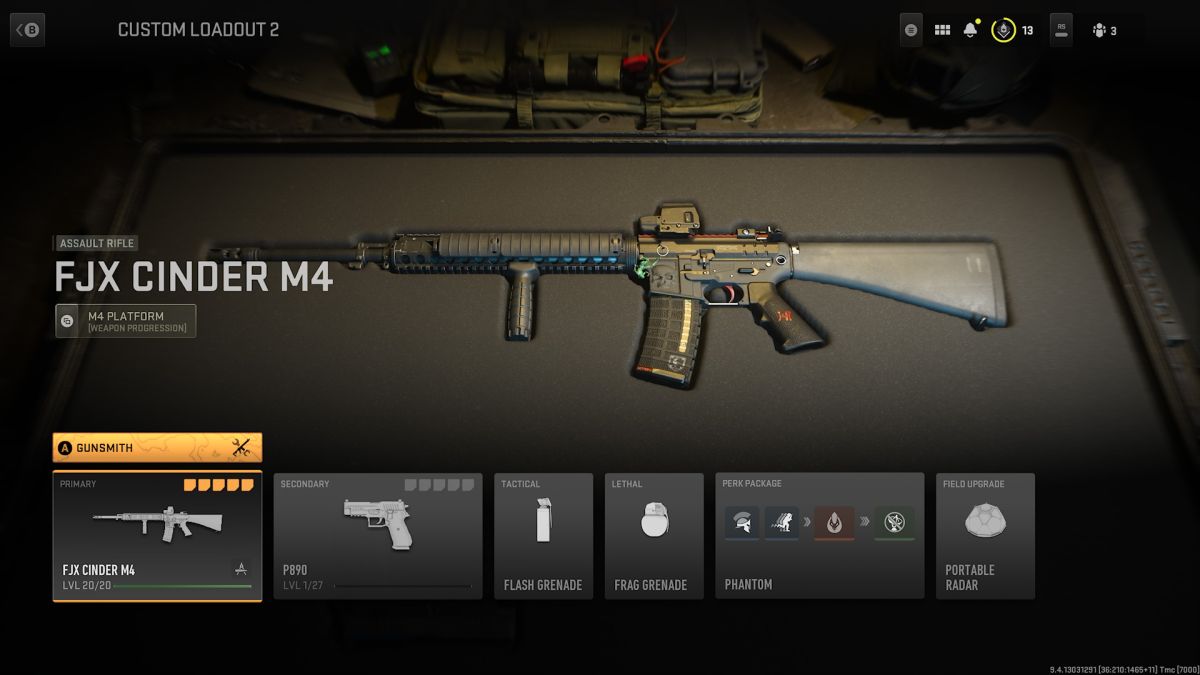 The best Modern Warfare 2 M4 loadouts are beginning to become clear, as more players get to grips with this ubiquitous weapon. It’s already proving to be very popular, and with good reason – not only does everyone have access to this gun from the start, but the M4 assault rifle is also one of the most versatile weapons available, being a solid choice whether you’re engaging the enemy at close, mid, or long-range. You may already be familiar with the M4 as it’s likely to be one of the first guns you’re killed by, since for many it will be part of their standard loadout so its use is widespread in multiplayer.

You’ll be able to access Modern Warfare 2 prestige once the Season One Battle Pass is live.

Still, if you want an edge against the competition, you’ll be wanting to create the best M4 loadout in Modern Warfare 2 that you possibly can. Truth be told, this weapon has a truly wild amount of attachments available, each of which can be tweaked – there’s a staggering number of M4 attachment fine tunes that can be made through Modern Warfare 2 weapon tuning, which allows you to mess with everything from the ADS speed of your sights to the range of your barrel. You’ll need to max the weapon level to get access to those options, but with this killer loadout it shouldn’t take you long to get there.

It’s likely that the way we see this assault rifle will continue to evolve in Modern Warfare 2, then. But in the meantime, here’s the best MW2 M4 Loadout we’ve found so far after leveling the weapon to level 20.

This is the best Modern Warfare 2 M4 Loadout that we’ve found so far, particularly for aggressive plays in the core 6v6 multiplayer offering. This MW2 M4 build is consistent at short and medium range encounters, with attachments like the Forge-Tac Castle Comp helping to keep your recoil under control. In a game as fast and as unforgiving as Modern Warfare 2, managing your recoil is especially important, particularly when dealing with close-quarters maps with short engagement ranges. Additionally, attachments like the XTEN Grip improve your sprint-to-fire and ADS, which pairs fantastically with the Cronen Mini Red Dot optic.

If you wanted to improve the control and versatility of this M4 build even further, you could consider swapping out the heavy Hightower 20″ Barrel for the more lightweight 14″ Carbine Shroud Barrel. If you’re getting serious about recoil management, handling, and your ADS time, then that’s something you should really think about – as is the Lockgrip Precision-40 under-barrel, rather than the Corio Precio Factory stock.

Whether you’re looking to jump into Ground War, are trying to prepare your weapons ahead of Warzone 2, or simply want a bit more range in the core 6v6 modes, you may want to consider this long range M4 build in MW2. This is a heavier setup than the aggressive build, making you less viable in short-range encounters; recoil will hit like a hammer, but it’s easier to control at range once you get going. Everything from the Hightower 20″ Barrel to the VX Pineapple Vert Grip will severely impact your aim down sight and movement speed, but this loadout is all about getting in position and cutting enemies off as they attempt to clear distances with minimal cover.

In terms of the optic, there are really a lot of options here. Scopes are universally shared attachments in Modern Warfare 2, so feel free to go with what’s comfortable. What I would say, however, is that you don’t want to go for a marksman scope, even on this long range build – keep it versatile, something which can work comfortably across all three engagement ranges, even if it does cost you a little ADS and aim walking movement speed.

In addition to your attachments, Modern Warfare 2 also lets you build out your own class – selecting a secondary weapon, alongside your perks, equipment, and more. While you are able to build out your own Perk Package – allowing you to mix-and-match Base Perks, along with a Bonus Perk and an Ultimate Perk which can be earned in match – you will need to level your character pretty significantly to get access to these options. If you’re just starting out, we recommend you stick with the Assault Perk Package.

If we were to build a dream Perk Package for our aggressive and long range M4 builds, it would include the following: Overkill (Basic Perk 1), Scavenger (Basic Perk 2), Fast Hands (Bonus Perk), Quick Fix (Ultimate Perk). Now, the standard Assault Perk Package includes all of these except for Fast Hands, instead coming equipped with the Hardline Bonus Perk – reducing your killstreak cost by one kill, which isn’t so bad.

The Assault Perk Package also gets you Overkill, which means you can carry a second primary weapon into combat. This is where you’ll want to pick up the Hurricane, which is essentially the M4 as an SMG. Seriously, invest time in this weapon now, before it starts to truly dominate.