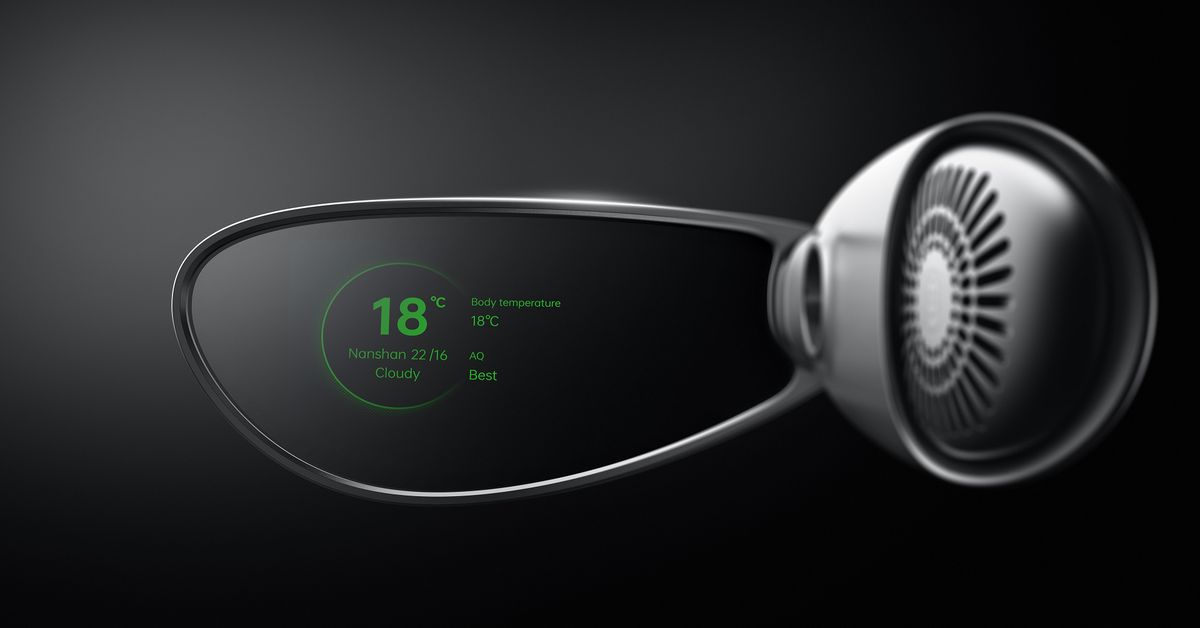 Oppo has announced the Air Glass, an AR device that’ll go on sale early next year. Oppo describes the Air Glass as an “assisted reality” product, as opposed to augmented reality, meaning it projects 2D information into your field of view rather than overlaying 3D objects onto the real world. (Yes, sort of like Google Glass.)

The Air Glass has a Qualcomm Snapdragon 4100 processor and weighs just 30g (about 1oz) in total. Oppo says it should last for 3 hours of active usage and 40 hours on standby. There are two frame designs, a silver half-frame and a black full-frame, and each is available in two sizes. The inside of the frame has a magnetic port that allows it to be attached to more conventional glasses.

The waveguide display uses a tiny projector with Micro LED tech capable of up to 3 million nits peak brightness, though Oppo says the actual brightness will be up to 1,400 nits in average conditions. It can be operated via touch, voice, hand tracking, and head tracking, as well as through a Smart Glass app on a smartphone running Oppo’s ColorOS 11 or above.

Oppo’s proposed use cases for the Air Glass are relatively modest. The company says it can be used for notifications and directions, as you’d expect, as well as features like teleprompting and real-time translation. The display is monochrome with either 16 or 256 levels of grayscale depending on the mode, so the Air Glass isn’t going to be beaming rich content into your eyes.

That said, it probably isn’t going to be a mature, mainstream product, either. Oppo says the Air Glass will receive a “limited release” in Q1 2022, and at least at first it’ll be only sold in mainland China.

The Air Glass was announced as part of Oppo’s ongoing annual Inno Day event. Oppo also revealed its first in-house NPU chip to boost machine learning-related imaging performance; it’s called the MariSilicon X and will feature in Oppo’s next Find X flagship in the first quarter of next year. Last week Oppo confirmed the debut of its first folding phone, the Find N, though that hasn’t broken cover just yet.