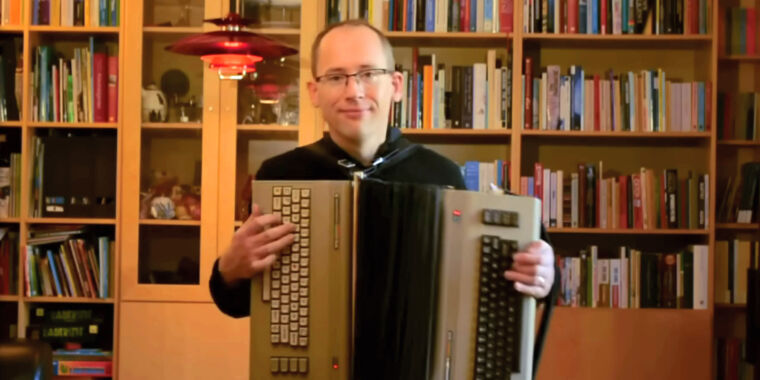 In late October, a Swedish software engineer named Linus Åkesson unveiled a playable accordion—called “The Commodordion“—he crafted out of two vintage Commodore 64 computers connected with a bellows made of floppy disks taped together. A demo of the hack debuted in an 11-minute YouTube video where Åkesson plays a Scott Joplin ragtime song and details the instrument’s creation.

Åkesson—a versatile musician himself—can actually play the Commodordion in real time like a real accordion. He plays a melody with his right hand on one C64 keyboard and controls the chord of a rhythm and bass line loop (that he can pre-record using the flip of a switch) using his left hand on the other keyboard.

A fair amount of custom software engineering and hardware hackery went into making the Commodordion possible, as Åkesson lays out in a post on his website. It builds off of earlier projects (that he says were intentionally leading up to this one), such as the Sixtyforgan (a C64 with spring reverb and a chromatic accordion key layout) and Qwertuoso, a program that allows live playing of the C64’s famous SID sound chip.

So how does the Commodordion work? Åkesson wired up a custom power supply, and when he flips the unit on, both Commodore 64 machines boot (no display necessary). Next, he loads custom music software he wrote from a Commodore Datasette emulator board into each machine.

A custom mixer circuit board brings together the audio signals from the two units and measures input from the bellows to control the volume level of the sound output. The bellows, composed of many 5.25-inch floppy disks cut and taped into shape, emit air through a hole when squeezed. A microphone mounted just outside that hole translates the noise it hears into an audio envelope that manipulates the sound output to match. The Commodordion itself does not have speakers but instead outputs its electronic audio through a jack.

The Commodordion does have one huge flaw, writes Åkesson: ergonomics. When playing, the unit puts strain on his left wrist, arm, and shoulder due to the position of the keys on the left-hand side of the instrument—and the fact that his left arm also needs to bear the weight of the unit. “This rather undermines the potential for the Commodordion as a viable musical instrument,” he writes.

Still, for a one-of-a-kind homemade hack, the resulting music—especially when played adeptly by Åkesson—sounds like the perfect soundtrack to a 1980s computer game. It’s an 8-bit love letter to a bygone era.