The moon meets up with Mercury and Saturn early Monday morning 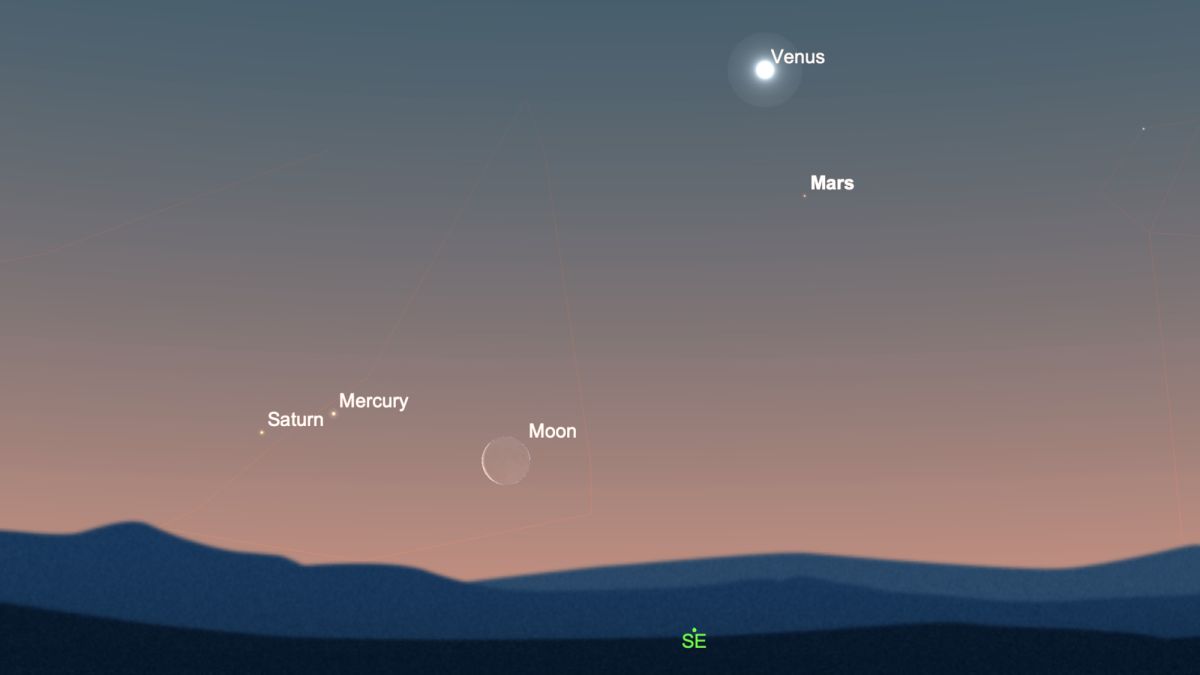 You may be able to watch the moon cluster up with ringed Saturn and fleeting Mercury on Monday (Feb. 28), but it will be a considerable challenge.

The three worlds will be clustered extra-close to the southeastern horizon as the sun is rising. Saturn is at magnitude 0.7 and Mercury at a brighter -0.1. (For perspective, most people can see stars down to magnitude 6 in dark-sky conditions.)

According to the skywatching site In-The-Sky.org, neither of the lunar-planetary conjunctions will be visible from New York City (which admittedly, has a fair share of light pollution interference) given that the two worlds will be within five degrees of the horizon at dawn. For reference, your clenched fist held at an arm’s length is about 10 degrees wide. Closer to the equator and farther south, viewing conditions will be better, as Mercury and Saturn will be higher in the sky before the sun rises and the planets fade into daylight.

But you might get lucky with the right equipment or in a darker or different area. If you’re looking for binoculars or a telescope to see planets in the night sky, check our our guide for the best binoculars deals and the best telescope deals now. If you need equipment, consider our best cameras for astrophotography and best lenses for astrophotography to prepare for the next planet sight.

Related: The brightest planets in the night sky: How to see them (and when)

See Saturn, Mercury and the moon?

If you take a photograph of Saturn, Mercury and the moon let us know! You can send images and comments in to [email protected].

You will still have opportunities to spot other planets, however. The moon, which will reach new phase on Wednesday (March 2), might be visible through the thick atmosphere close to our horizon. Farther up, you can spot bright Mars (in red) and Venus (above Mars, shining brightly in white).

Venus and Mars are easily visible to the naked eye and were just in close alignment (or conjunction) with the moon on Sunday (Feb. 27). Worlds commonly come close to each other in Earth’s sky because the planets, moon and sun all share the same approximate pathway, called the ecliptic.

If you’re up for even more planet-gazing, NASA urges you to get out also in the evening to look for Jupiter in the twilight sky. It will be your last chance to easily see a planet in the early evening until August, the agency said in a statement; this period will be the first time since 2018 with no bright planets visible after sunset.

“The post-sunset sky will be essentially devoid of naked-eye planets until August, when Saturn will start rising in the east around sunset,” NASA wrote. “There’s a short period, though, in April and May when you might be able to spot Mercury as it pops briefly above the horizon.”