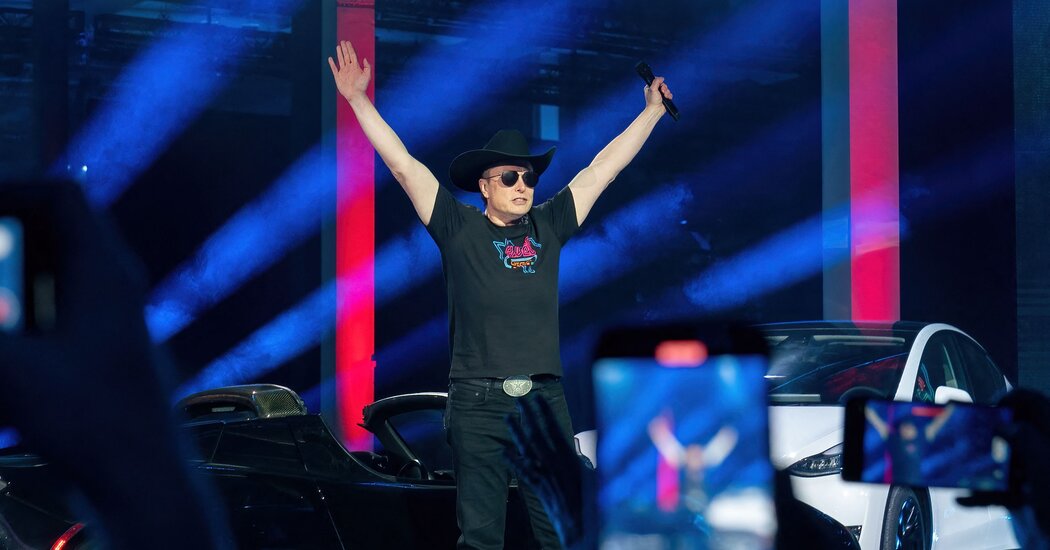 In January 2020, thousands of Twitter employees gathered in Houston for a corporate summit called #OneTeam. During the event, Jack Dorsey, Twitter’s chief executive at the time, revealed he had invited a surprise guest. Then, with a wave and a smile, Elon Musk appeared on giant screens above the stage. The crowd cheered, clapped and pumped fists. “We love you,” one employee shouted.

Inside Twitter today, surprise announcements about Mr. Musk land differently. Employees said they had largely stopped celebrating the richest man in the world since he declared his intent this month to buy Twitter, scrap its content moderation policies and transform the publicly traded company into a private one. On Monday, Twitter announced it had accepted Mr. Musk’s offer to buy the company for about $44 billion.

As the takeover fight played out over the last two weeks, Twitter employees said they were frustrated that they had heard little from management about what it meant for them, even as Twitter closed in on a deal with Mr. Musk on Monday morning. They asked their chief executive, Parag Agrawal. They asked Mr. Musk himself in questions sent on Twitter. Some even went to Charles Schwab, the financial firm that manages their stock options, for clarity about the impact a sale of the company would have on them.

But they were not getting very many answers before Mr. Musk’s bid succeeded, said 11 Twitter employees who asked to not be named because they were not authorized to speak publicly, even as it became clear that they could soon find themselves reporting to Mr. Musk.

On Monday afternoon, Mr. Agrawal and Twitter’s chairman, Bret Taylor, finally met with employees to discuss the deal. Compensation would remain largely the same under Mr. Musk, Mr. Agrawal said, but he did not make the same assurances about Twitter’s policies and culture.

“We constantly evolve our policies,” Mr. Agrawal said in response to an employee question about whether former President Donald J. Trump would be allowed back on the platform. “Once the deal closes, we don’t know what direction this company will go in.”

The silence that hovered over the negotiations is routine in takeover fights, Mr. Taylor told employees. As the board of directors confers with bankers, lawyers and expensive public relations firms, employees are often kept in the dark. But for employees at Twitter, a company that has billed itself as the world’s town square, finding out what is happening to their company primarily through Twitter, the service they built, was particularly embittering.

After years of leadership squabbles, demands for change from activist investors and the boundary-testing tweets of Mr. Trump, Twitter’s more than 7,000 employees are accustomed to turmoil. But some of them say the takeover by the mercurial billionaire has hit them in ways other company crises have not.

Employees said they worried that Mr. Musk would undo the years of work they had put into cleaning up the toxic corners of the platform, upend their stock compensation in the process of taking the company private and disrupt Twitter’s culture with his unpredictable management style and abrupt proclamations.

But Mr. Musk also has fans among Twitter’s rank-and-file, and some employees have welcomed his bid. In an internal Slack message seen by The New York Times that asked if employees were excited about Mr. Musk, about 10 people responded with a “Yes” emoji. A Twitter spokesman declined to comment.

If Twitter is worth buying, much of its value is in the employees who build and manage the service, said David Larcker, a professor of accounting and corporate governance at Stanford University. “The wild card is, what if it becomes a very different company than they thought they were working for? It’s an uncomfortable working relationship,” he said.

Mr. Musk has made some of his intentions clear in regulatory filings, tweets and public appearances: The company must scrap nearly all of its moderation policies, which ban content like violent threats, harassment and spam. It must provide more transparency about the algorithm it uses to boost tweets in users’ newsfeeds. And it must become a private company.

Twitter has been expanding its content moderation policies since 2008, when its 25th employee was hired specifically to combat abuse on its platform. The teams overseeing moderation and safety have now grown to hundreds of employees.

Many Twitter employees feel personally invested in the company’s effort to encourage healthy conversation — even if they do not directly work on content moderation — and have pressed executives to crack down further on hate speech and misinformation, six employees said. They see Mr. Musk’s proposal to revert to Twitter’s early, lax approach as a rebuke of their work.

But other employees have argued in internal messages seen by The Times that their co-workers have shifted too far to the left side of the political spectrum, making employees who support Mr. Musk’s plans too uncomfortable to speak up. In a worker-run survey of nearly 200 Twitter employees on Blind, an anonymous workplace review app, 44 percent said they were neutral on Mr. Musk. Twenty-seven percent said they loved Mr. Musk, while 27 percent said they hated him.

Although executives and employees at Twitter have agreed with Mr. Musk about changes to its algorithm, that work is in its earliest stages and could take years to complete. That could test something Mr. Musk is not particularly known for — patience.

One of the top concerns among Twitter workers is whether they will take a financial hit from Mr. Musk’s acquisition. Many Twitter employees make 50 percent or more of their total compensation from Twitter stock. Some employees said they feared missing out on the long-term value of their stock at Mr. Musk’s price of $54.20 per share.

At the meeting with employees on Monday, executives tried to assure employees that they wouldn’t be shortchanged by Mr. Musk’s acquisition. Mr. Agrawal told employees that their stock options would convert to cash when the deal with Mr. Musk closes, which he estimated would take between three and six months. Employees would receive their same benefits packages for a year after the deal was finalized and there were no immediate plans for layoffs, he added.

In an earlier attempt to quell financial worries, Sean Edgett, Twitter’s general counsel, told employees that any potential buyer would most likely be required to keep employee equity “as is” or provide equivalent compensation, like a cash award.

Mr. Edgett, who made his comments before the deal with Mr. Musk was announced, stressed that employees should not view his guidance as insight into the deal-making. “This is meant to provide some peace of mind and explain how these things typically work, not because we believe there will be one outcome versus another,” he wrote in messages to employees reviewed by The Times.

But Mr. Musk’s campaign has also begun to undercut Twitter’s attempts to recruit new employees, according to internal documents outlining the company’s hiring efforts that were viewed by The Times. Prospective hires have expressed skepticism about Mr. Musk’s plans to transform Twitter and upend its content moderation, those documents said.

Recruits have also fretted that the shares included in their offer letters could quickly become devalued if Mr. Musk took Twitter private.

Twitter’s recruiting problem could balloon further if current employees quit, as some have warned they would do if Mr. Musk took over. Other employees worried about layoffs or the loss of work visas under Mr. Musk, and raised questions about these issues with Mr. Agrawal.

Managers responsible for hiring have been asked to keep track of how many prospective employees turn down job offers because of fears about Mr. Musk, according to internal communications reviewed by The Times.

Employees have also wondered: Could he also move Twitter’s headquarters to Texas, as he did with Tesla? Could he end the company’s flexibility about returning to the office, which has become a selling point for employees and recruits? Mr. Musk, after all, fought with officials in California to keep his car factory open early in the pandemic.

Mr. Agrawal tried to calm his work force. In the question-and-answer session on Monday, he urged employees to “operate Twitter as we always have,” adding that “how we run the company, the decisions we make, and the positive changes we drive — that will be on us, and under our control.”

The stress at the mention of Mr. Musk is a stark contrast to the welcome he enjoyed from employees two years ago. Although some employees at the event in 2020 said they were skeptical of Mr. Musk, many of them listened attentively as he gave his advice for Twitter: The company should step up its moderation, he said, by doing more to weed out bots and scammers from the actual humans using the platform.

“By the way, do you want to run Twitter?” Mr. Dorsey asked Mr. Musk.