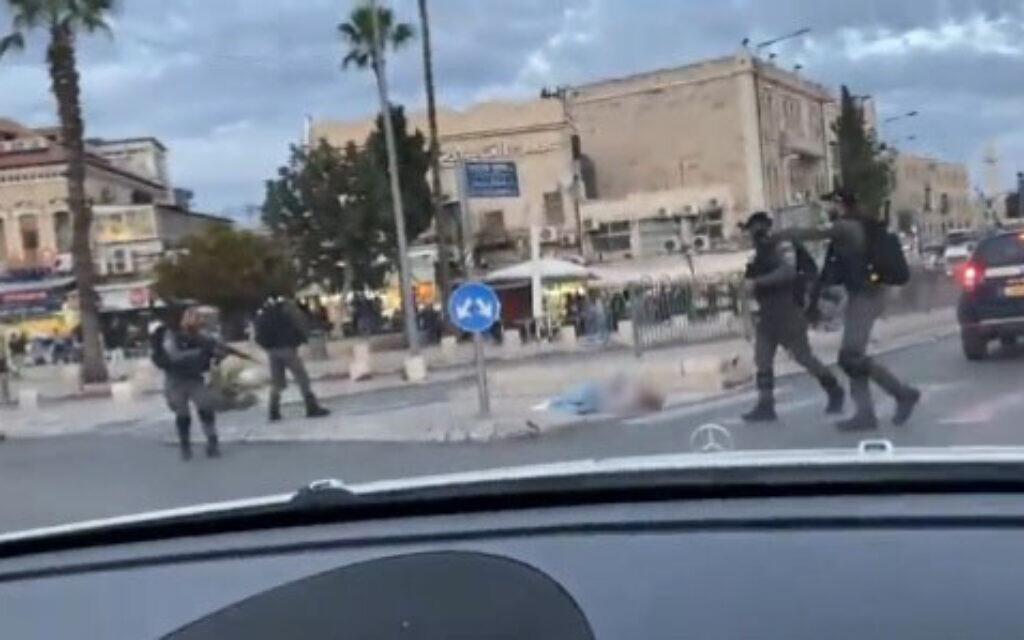 A young Israeli man was stabbed in Jerusalem Saturday afternoon, in what authorities said was a suspected terror attack.

The Haredi man, aged around 20, was moderately-to-seriously injured in the attack near the Old City’s Damascus Gate.

Police said the suspected assailant then attempted to stab a policeman. He was shot and killed by security forces at the scene.

Paramedics rushed the stabbing victim to Shaare Zedek Medical Center. According to the Ynet news site, he had suffered a stab wound to his neck.

A video from the scene showed Border Policemen firing at the suspected assailant several times as he lay incapacitated on the ground, leading to criticism by Arab politicians, including Regional Cooperation Minister Issawi Frej.

“Faced with attempted murder, assailants should be shot to save lives, not in order to take [the attackers’] lives when they no longer pose a threat,” Frej said.

The minister said policemen’s conduct as seen in the video “expresses an indifference to human life that should be investigated.”

Prime Minister Naftali Bennett expressed support for the policemen, saying they “acted very quickly and resolutely, as is expected of police officers, against a terrorist who tried to murder an Israeli civilian.

“I wish to convey to them my full backing. That is how our forces are expected to act and that is how they acted. We must not allow our capital to become a terror hotspot.”

Public Security Minister Omer Barlev, who oversees police, said: “A second or two after the first shooting the police officers needed to decide whether the terrorist might activate a suicide bomb. When in doubt, there is no doubt.”

The Joint List’s MK Aida Touma-Suleiman said policemen had executed the man “when he no longer posed a threat… a terrible crime. This is the reality that occupation creates.”

Her colleague Ofer Cassif also called the shooting “an extrajudicial execution,” adding: “Shooting an injured person lying on the ground when he is no longer a danger, regardless of his actions, is a war crime.”

Border Police chief Amir Cohen said in a statement that he “fully backs” the officers’ conduct in the incident, saying it prevented him from potentially further harming people.

The knife used by a Palestinian assailant in a stabbing attack in Jerusalem, on December 4, 2021. (Israel Police)

Unnamed sources in Border Police told Ynet that policemen’s conduct was justified as an assailant on the ground could still activate a suicide vest and so are still a potential danger.

Interior Minister Ayelet Shaked expressed support for the officers, saying that they “are at the forefront and we stand behind them.” Education Minister Yifat Shasha-Biton and Communications Minister Yoaz Hendel also praised their performance.

Ynet identified the attacker as Muhammad Shaukat Muhammad Salima, a 25-year-old from the West Bank town of Salfit who was in Israel illegally.

Palestinian rioting later developed at the scene, with police using stun grenades and other measures against the protesters.

Damascus Gate was the epicenter of protests and clashes between Palestinians and Israeli police last spring, during the Muslim holy month of Ramadan. The unrest spread to other parts of the city, eventually helping to ignite an 11-day Gaza war.

There have been dozens of attacks in recent years in and around the Old City, nearly all carried out by individual Palestinians with no known links to armed groups. The Hamas terror group, which rules Gaza, praised Saturday’s attack but did not take responsibility for it.

Last month, a man was killed in a terror attack in Jerusalem’s Old City. Elie Kay, 26, from the central Israeli city of Modiin, was employed at the Western Wall as a tour guide.

The recent immigrant from South Africa was shot dead by a Hamas gunman. Four other people were wounded in the shooting before officers shot and killed the gunman.

Agencies contributed to this report.


You’re serious. We appreciate that!


We’re really pleased that you’ve read X Times of Israel articles in the past month.

That’s why we come to work every day – to provide discerning readers like you with must-read coverage of Israel and the Jewish world.

So now we have a request. Unlike other news outlets, we haven’t put up a paywall. But as the journalism we do is costly, we invite readers for whom The Times of Israel has become important to help support our work by joining The Times of Israel Community.

For as little as $6 a month you can help support our quality journalism while enjoying The Times of Israel AD-FREE, as well as accessing exclusive content available only to Times of Israel Community members.

Already a member? Sign in to stop seeing this