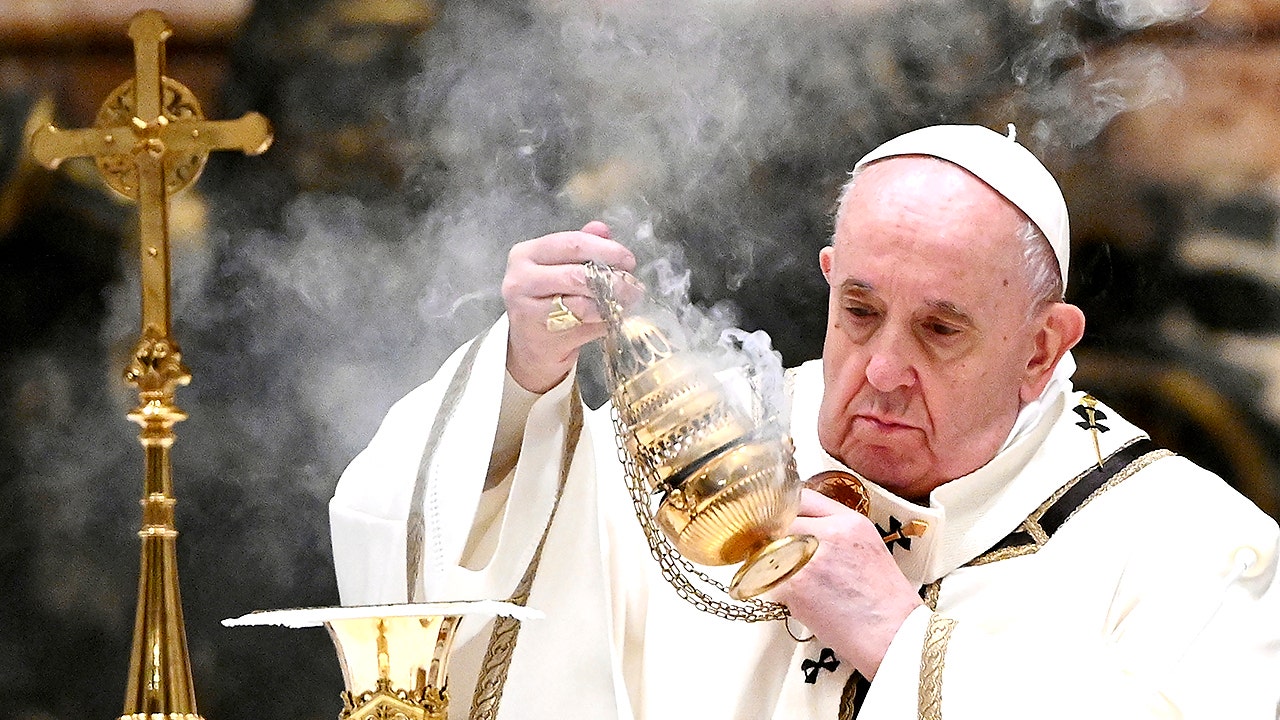 ROME — Pope Francis celebrated Christmas Eve Mass before an estimated 2,000 people in St. Peter’s Basilica on Friday, going ahead with the service despite the resurgence in COVID-19 cases that has prompted a new vaccine mandate for Vatican employees.

A maskless Francis processed down the central aisle as the Sistine Chapel choir sang “Noel,” kicking off the Vatican’s Christmas holiday that commemorates the birth of Jesus in a manger in Bethlehem. He remained maskless throughout the service.

In his homily, Francis urged the faithful to focus on the “littleness” of Jesus, and remember that He came into the world poor, without even a proper crib.

“That is where God is, in littleness,” Francis said. “This is the message: God does not rise up in grandeur, but lowers Himself into littleness. Littleness is the path that He chose to draw near to us, to touch our hearts, to save us and to bring us back to what really matters.”

“God does not rise up in grandeur, but lowers Himself into littleness. Littleness is the path that He chose to draw near to us, to touch our hearts, to save us and to bring us back to what really matters.”

Attendance on Friday was limited to about 2,000 people, far more than the 200 allowed in 2020 when Italy was in a full Christmas lockdown. But the number is a fraction of the capacity of St. Peter’s, which can seat up to 20,000 and in pre-pandemic times would be packed for one of the most popular Vatican liturgies of the year.

The “Midnight Mass” actually began at 7:30 p.m., a nod to the 85-year-old pope’s endurance and a hold-over from last year, when the service had to end before Italy’s nationwide COVID-19 curfew.

No curfew is in place this year, but cases this week have surged even beyond 2020 levels. For the second day in a row, Italy on Friday set a new pandemic daily record with 50,599 new cases. Another 141 people died, bringing Italy’s official death toll to 136,386.

With the arrival of the omicrom variant in Italy, the Vatican secretary of state on Thursday imposed a new vaccine mandate on all Vatican staff, extending it to all employees except those who have recovered from the coronavirus. Previously, only employees who dealt with the public directly had to be vaccinated, such as staff at the Vatican Museums and the Swiss Guards, while others could access their offices with regular testing.

The mandate does not apply to the faithful attending Mass, but they are required to wear masks. Those attending Friday’s Mass, and the priests, bishops and cardinals concelebrating it, all wore masks. Francis, who is missing part of one lung and had intestinal surgery in July, has largely eschewed masks, even when greeting prelates and the general public.

“I’m not worried because first of all I have a mask on, and I’ve had my third dose so I feel relaxed,” said Franco Pasquali, a Rome resident attending the service. “The problem is those who don’t vaccinate, that’s all.”

Francis is believed to have received the third booster shot, as has emeritus Pope Benedict XVI. Francis has said vaccination is an “act of love” and he has called for wealthier countries to provide the shots to the developing world.

Among those attending the Mass was Melissa Helland, an American tourist visiting Rome with her family.

“This is the first time in the last two years that we’ve been able to gather both as a family and to attend Mass because of the pandemic, so we are very excited and grateful,” she said before the service began.