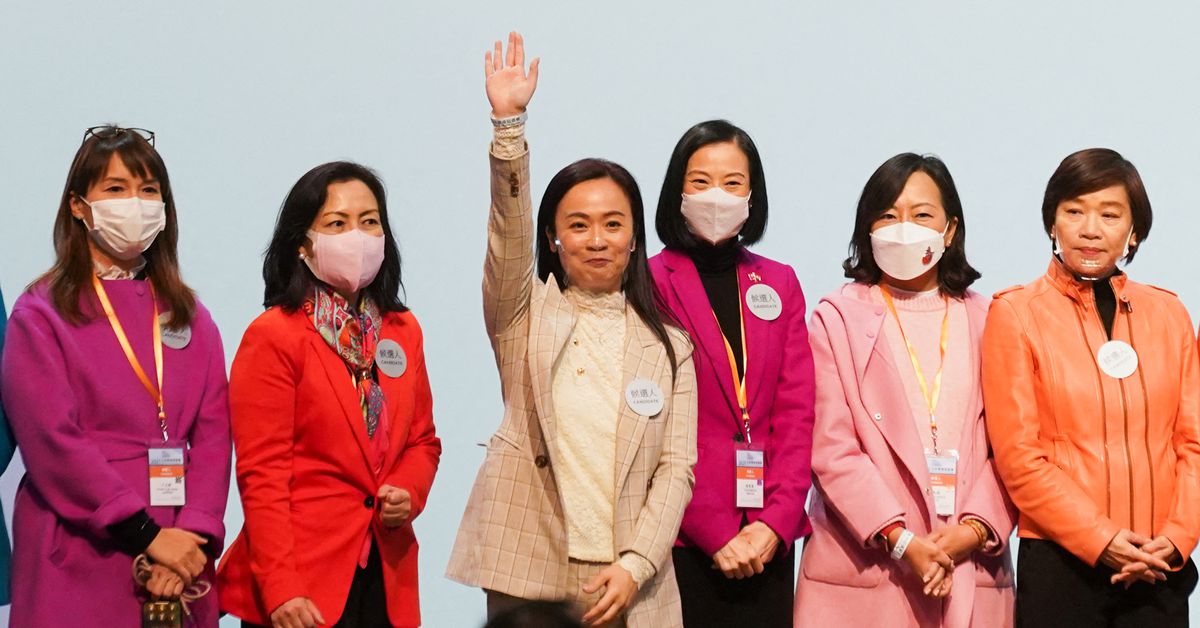 HONG KONG, Dec 20 (Reuters) – Pro-Beijing candidates swept to victory in an overhauled “patriots”-only legislative election in Hong Kong that critics deemed undemocratic, with turnout hitting a record low amid a crackdown on the city’s freedoms by China.

The 30.2% turnout, about half that of the previous poll in 2016, was seen by pro-democracy activists as a rebuke to China after it imposed a broad national security law and sweeping electoral changes to bring the city more firmly under its authoritarian grip.

Almost all seats were taken by pro-Beijing and pro-establishment candidates, some of whom cheered on stage at the vote counting centre and chanted “guaranteed win”.

Hong Kong leader Carrie Lam told a news conference on Monday the turnout was indeed low but that she was not able to give specific reasons for it.

“But 1.35 million coming out to vote – it cannot be said that it was not an … election that did not get a lot of support from citizens,” Lam said.

When asked if the low turnout meant that her party lacked a public mandate, Starry Lee, the head of the pro-Beijing Democratic Alliance for the Betterment and Progress of Hong Kong (DAB) that won half of the directly elected seats, said the patriots-only rules would improve governance.

“It needs some time for people to get adapted to this system,” she told reporters at the vote counting centre.

The election – in which only candidates vetted by the government as “patriots” could run – has been criticised by some foreign governments, rights groups, and mainstream Hong Kong pro-democracy parties, which did not participate in the polls, as undemocratic.

Most of the dozen or so candidates who called themselves moderates, including former democratic lawmaker Frederick Fung, failed to gain a seat, succumbing to pro-Beijing rivals.

“It’s not easy to push people (to vote). I think they are feeling indifferent,” Fung told Reuters.

The previous record low for a legislative election held after the city’s 1997 return from British to Chinese rule was 43.6% in 2000. About 2% of the votes cast on Sunday were invalid, a record high, according to local media calculations.

China’s Liaison Office in Hong Kong, the Beijing government’s representative in the territory, described the election as “successful practice of democracy with Hong Kong characteristics.”

The Hong Kong branch of China’s foreign ministry said the electoral system was an internal affair and urged “foreign forces” not to interfere.

In a 57-page white paper published on Monday, the Chinese government said it had provided constant support to Hong Kong in developing its “democratic system” and criticised the often-violent 2019 pro-democracy protests. read more

Lam, who visits Beijing this week for her annual report to state leaders, said the document was a timely rebuttal of criticism of the elections by foreign governments and media.

Political analysts say the turnout is a barometer of legitimacy in an election where pro-democracy candidates are largely absent, and a crackdown under the security law and other legislation has jailed scores of democrats who had originally wanted to run, and forced others into exile. read more

Under the electoral shake-up announced by China in March, the proportion of directly elected seats was reduced from around half to less than a quarter, or 20 seats. read more

Forty seats were selected by a committee stacked with Beijing loyalists, while the remaining 30 were filled by professional and business sectors such as finance and engineering, known as functional constituencies.

Turnout for these professional groups also fell to 32.2% from 74% in 2016. Some sectors whose voters have traditionally leaned pro-democracy, including education, social welfare, and law, had the lowest rates.

In 2019, the last major citywide election for district councils seats, the turnout was 71% with around 90% of the 452 seats won by democrats.

State agency Xinhua said the results demonstrated “the true will of the people,” while pro-Beijing newspaper Ta Kung Pao described the vote as “the most successful” since the 1997 handover.

Democrat Sunny Cheung, who moved to the United States to escape prosecution under the security law, said most of Hong Kong had “consciously boycotted the election to express their discontent to the world.”