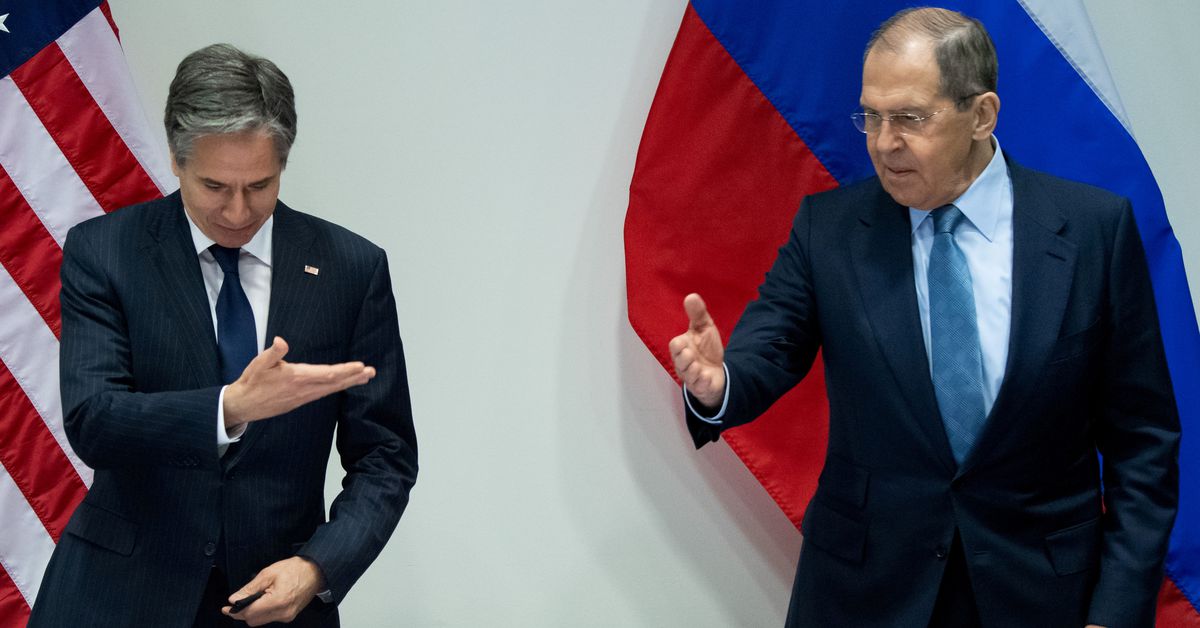 U.S. Secretary of State Antony Blinken and Russian Foreign Minister Sergey Lavrov gesture as they arrive for a meeting at the Harpa Concert Hall, on the sidelines of the Arctic Council Ministerial summit, in Reykjavik, Iceland, May 19, 2021. Saul Loeb/Pool via REUTERS/File Photo

Blinken, speaking at the start of talks with Ukrainian Foreign Minister Dmytro Kuleba, reiterated Washington’s concerns over a build-up of Russian troops on the border that has triggered threats of fresh Western sanctions against Moscow.

Kuleba tweeted that Ukraine, which is not a NATO member but seeks closer ties with the Atlantic alliance, was working with Western countries on a “comprehensive deterrence package including severe economic sanctions” to stop Russian aggression.

“The unwavering commitment of the United States to Ukraine’s territorial integrity, sovereignty, its independence… that is a view that not only the United States holds but all of our NATO allies hold as well,” Blinken told Kuleba at their talks.

“That was very, very clearly evident in the conversations that we had over the last couple of days,” he added.

In his meeting with Lavrov, scheduled for 1015 GMT on the sidelines of the summit of the Organization for Security and Cooperation in Europe (OSCE) in Stockholm, the top U.S. diplomat is expected to relay in person the threat of further sanctions, if Moscow fails to end its troop build-up on Ukraine’s border.

Ukraine has become the main flashpoint between Russia and the West as relations have soured to their worst level in the three decades since the Cold War ended. Kyiv says Russia has amassed more than 90,000 troops near their long shared border.

Moscow accuses Kyiv of pursuing its own military build-up. It has dismissed as inflammatory suggestions it is preparing for an attack on Ukraine and has defended its right to deploy troops on its own territory as it sees fit. read more

But President Vladimir Putin has also said Russia would be forced to act if NATO placed missiles in Ukraine that could strike Moscow within minutes. read more

Speaking in Riga on Wednesday after a meeting of NATO foreign ministers, Blinken expressed U.S. concerns about what he said were Russian efforts to destabilise Ukraine from within. read more

“We don’t know whether President Putin has made the decision to invade. We do know that he’s putting in place the capacity to do so in short order, should he so decide,” said Blinken.

Blinken will remind Lavrov in their talks that there is a diplomatic solution, a senior State Department official told reporters late on Wednesday.

“Beyond making clear the cost of Russian actions, I’m certain that the Secretary is also going to want to make clear that there is a diplomatic off-ramp,” the official said.

The Kremlin annexed the Black Sea peninsula of Crimea from Ukraine in 2014 and then backed rebels fighting Kyiv government forces in the east of the country. That conflict has killed 14,000 people, Kyiv says, and is still simmering.

As well as Ukraine, other issues including cybersecurity and the Kremlin’s treatment of its critics have also helped drive relations between Washington and Moscow to post-Cold War lows.

Another focal point for East-West tensions has been the refugee crisis on the borders between Belarus, a Russian ally, and NATO members Poland and Lithuania.

Western nations accuse Belarusian leader Alexander Lukashenko of engineering the migrant crisis in retaliation for sanctions imposed on Minsk over its human rights record. Minsk blames the West for the humanitarian crisis.

Additional reporting by Sabine Siebold in Riga and Daphne Psaledakis and Simon Lewis in Washington; writing by Niklas Pollard
Editing by Gareth JOnes