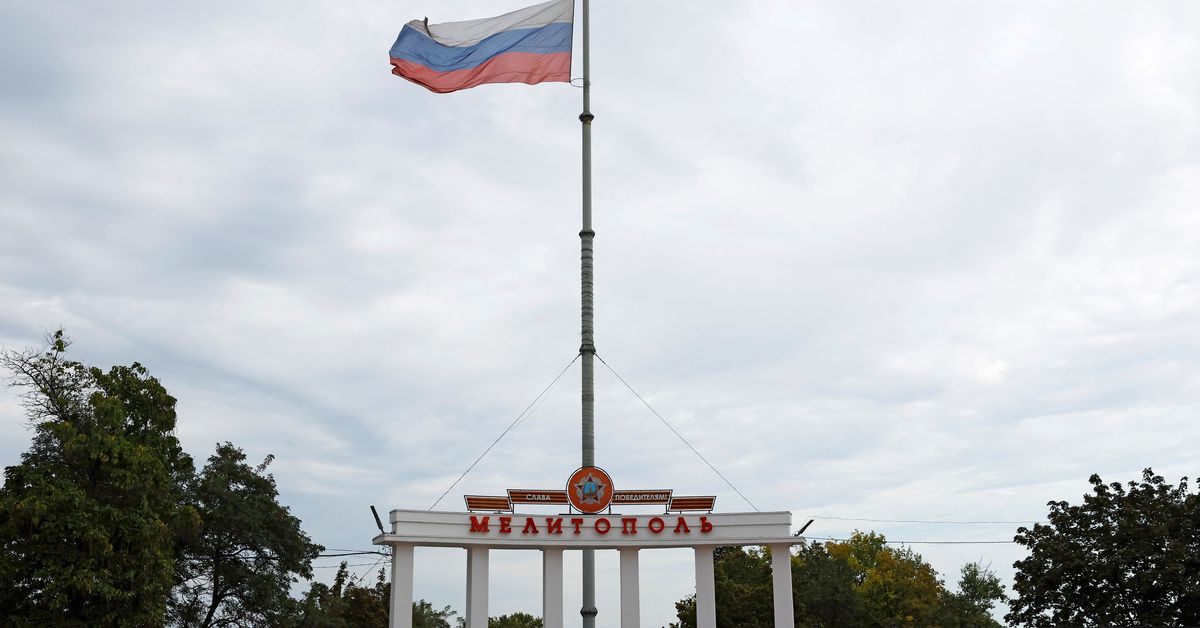 ZAPORIZHZHIA, Ukraine, Sept 28 (Reuters) – “It’s funny. Nobody voted, yet the results are in,” laughed Lyubomir Boyko, 43, from Golo Pristan, a village in Russian-occupied Kherson province as he waited on Wednesday outside a United Nations aid office with his family at a refugee reception centre.

As Russia prepares to annex a swathe of Ukrainian territory the size of Portugal after staging what it calls referendums in four provinces, hundreds of Ukrainians escaped through the last Russian checkpoint. Many said they had fled while they still can.

“A lot of people are just leaving everything behind. There are places that are completely deserted,” said Boyko. “Everybody wants to be in Ukraine, and this is why everybody is leaving. Over there is a lawless place. Entire villages are leaving.”

He, his wife and their two children had arrived at the aid centre in the parking lot of a home improvement store in Ukrainian-held Zaporizhzhia city, after waiting for two days before Russian forces abruptly let them out.

Those fleeing Russian-held territory say the so-called referendum has been carried out by men with guns forcing people to cast ballots in the street.

“They can announce anything they want. Nobody voted in the referendum except a few people who switched sides. They went from house to house, but nobody came out,” Boyko said.

For now, Russian forces have been letting some people out of occupied parts of Kherson and Zaporizhzhia provinces through the one checkpoint. No one knows how long the route will stay open.

The biggest fear is that fighting-aged men will be press-ganged into Russian forces once Moscow declares the territory to be Russia. Boyko said he did not know if draft-aged men were still able to leave.

“Russian soldiers asked us, ‘Why are you fleeing Russia,'” said Tatiyana Gorobets, a 46-year-old nurse from Velyka Lepytykha, in Kherson province, who responded that she and her husband were going to visit their two children they sent to safety in Lviv two months ago. “You can’t say anything else.”

The couple gathered their clothing, abandoned their home, and departed their town early on Sunday. Russian troops initially barred them from crossing but let them out after three nights, they said.

“We left because we could feel the pressure, the doors were closing and we would not be able to leave,” said shopkeeper Lyudmila Sapronov, 48, whose family travelled in a second car along with the Gorobets family.

With public schools ordered to switch to the Russian curriculum and classes in Russian next month, she did not want her 13-year-old son Bogdan returning to the local school.

“You can imagine how I feel now,” she continued, her eyes welling with tears. “As soon as we crossed the checkpoint, the first photo I took was of the Ukrainian flag. I’m happy.”

An air raid siren sounded, and a downpour drenched the parking lot of the Epicenter home improvement store that hosts the reception center in plastic shelters. A U.S.-based charity, World Central Kitchen, was providing hot meals inside a tent.

“The line of vehicles was so long you could not see the end of it,” recounted another man, Andriy, 37, who declined to give his last name, standing by the yellow, mud-spattered minibus in which he arrived with his wife, two children and parents.

“Seventy percent of people are leaving because of the referendum. There was no light, no gas, and no work and all of a sudden, you get the referendum,” said the agricultural worker from Beryslav, in Kherson province. “It’s complete nonsense. I don’t know a single person among those I know who voted.”

He said he saw passers-by forced to fill out ballots on their knees at a Bereslav crossroad.

Russia says voting has been voluntary and turn-out has been high. Pro-Russian officials have published what they describe as results showing overwhelming support for annexation. Kyiv and Western countries call the exercise a complete sham, aimed at justifying the annexation of territory seized by force.

“If I came to your home and told you, ‘Now this place is mine,’ what would you do?” chimed in Andriy’s 60-year-old father Viktor.

“Would you hand it over? No, you would chase them off with a pitchfork. The Russians are morally ugly. This is all awash in blood.”