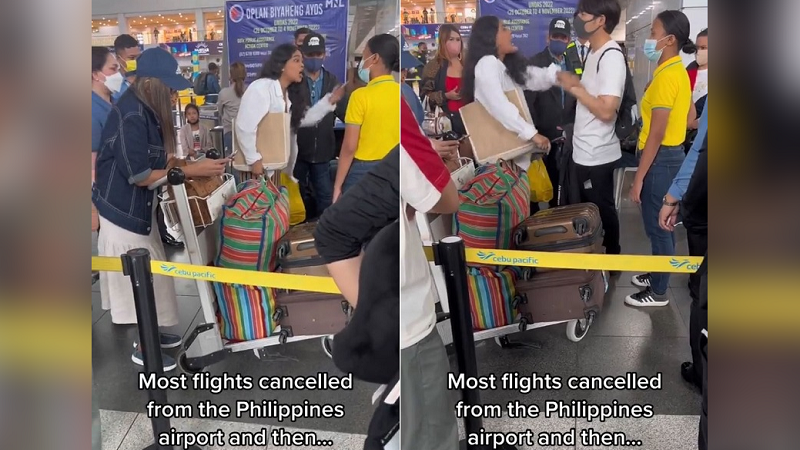 A video of a woman in the Philippines berating an airport employee after typhoons in the country caused numerous flights to be canceled went viral on TikTok.

In the now-deleted video filmed and posted by TikTok user @jackie_solo_traveller, the woman can be seen yelling at a Cebu Pacific staff member and demanding to see their manager at an unidentified airport.

“We need answers!” she yells. “So you don’t tell me, ‘manage your own f*cking booking,’ because we’ve been doing that since a while ago! Do you understand? So you get the manager!”

A man, whose relationship with the woman is unclear, appears from behind and attempts to de-escalate the situation. She pulls away from him and continues to yell in frustration, “No! We spent money here!”

More from NextShark: Filipino family who went viral for their kindness seek support for their daughter’s rare condition

In her video’s description, @jackie_solo_traveller wrote:

“Typhoon in the Philippines causing lots of flights to be cancelled. My flight was cancelled 10 mins before its supposed takeoff time. Then staff from the airline closed the only help desk and told us to manage our own flights.”

She corroborates her explanation in a follow-up video, in which she says her own flight was delayed by “232 hours, which is about eight or nine days.”

“I didn’t hear them say to mind your booking, but I’m guessing it was said by what the girl said in the video,” she continues. “Obviously, a lot of people were very confused, angry, that girl [was] particularly angry. But that’s kind of what happened behind the scenes, just kind of being stranded in the airport, basically.”

Commenters on the follow-up video criticized both the angry woman and the airline.

“Companies get away with this lack of proper customer service,” one user wrote. “Government should step up and be pro consumer to promote the country.”

“There’s no excuse for the woman to behave the way that she did,” wrote another user. “The staff on the ground know barely anything.”